A lovely reply arrived today from the UK. I had written to Prince Harry & Duchess Meghan last month to send them my warmest congratulations on the birth of their son, Archie Harrison Mountbatten-Windsor.

The reply arrived just under a month after I had written. This is a very excellent and a bit surprising of response time. But don't expect to get so lucky, or start worrying if you wrote for an earlier event and haven't gotten a response yet. Clarence House gets a lot of mail for big events like this, and it can take them months of answer everyone. And, they don't answer letters in the order they arrive. So, be patient. They will likely take 4 or 5 months, maybe more, to send out all the replies.

The front of the envelope is usual from the British Royals and features the new postmark from the Court Post Office at Buckingham Palace that debuted in March. The Court Post Office is mail's first stop on its way to well-wishers after being picked up at Clarence Hosue by the Royal Mail.

The back of the envelope features the Black Crown/Kensington Palace we have seen since 2016. This is currently used by both the Cambridges & Sussexs. I would expect the Sussexs to get new stationery eventually to reflect their office move.

Instead of the usual photocard from Clarence House, I received a personal letter from Claudia Spens. Miss Spens is the head of the correspondence section at Clarence House and is in charge of the team that answers all of Charles, Camilla, Cambridges & Sussexs' mail.

While they are still using Kensington Palace stationary, it is important to note that the "From:" line now reads, "The Office of TRH the Duke and Duchess of Sussex." This is the first time I've seen this. The letter I got from the Sussexs for Christmas in April, still listed them together with the Cambridges. 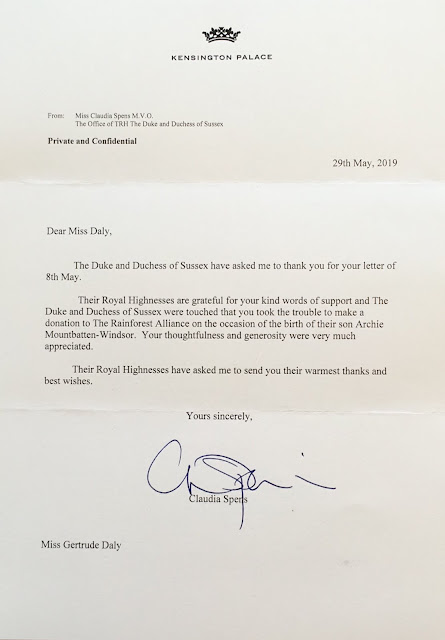 The Duke and Duchess of Sussex have asked me to thank you for your letter of 8th May.

Their Royal Highnesses are grateful for your kind words of support and The Duke and Duchess of Sussex were touched that you took the trouble to make a donation to The Rainforest Alliance on the occasion of the birth of their son Archie Mountbatten-Windsor. Your thoughtfulness and generosity were very much appreciated.

Their Royal Highnesses have asked me to send you their warmest thanks and best wishes.

It would have been great to get the typical photo card, as I would love a photo of little Archie. But it is nice to get a personal letter that mentions specifically the charity I donated to. As I choose this for personal reasons. I had mentioned in my letter I had made a donation to The Rainforest Alliance and had written a bit about why I had chosen this charity specifically. I even included a little fact sheet about The Rainforest Alliance's work.