I long awaited reply arrived today from the UK. I had written to Harry & Meghan back in May to congratulate them on their wedding. This reply came about 5.5 months after I had written, which is a long response time, but not the longest I've seen. (That honor would go to the Queen's 90th Birthday Reply.)

The envelope is the usual from the British Royals, with the red postmark from the Court Post Office at Buckingham Palace. 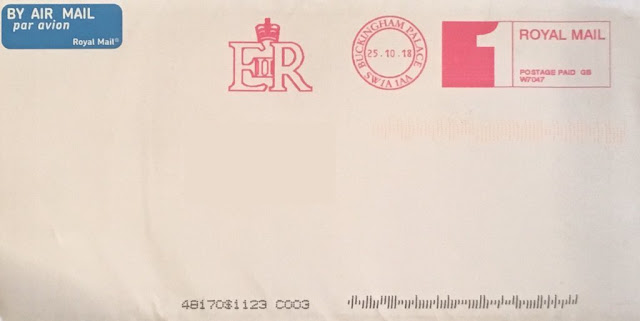 The back of the envelope features a black with Kensington Palace written underneath, that is used for the Cambridges & Sussex's mail.

The reply is the typical photo card, along with a letter. 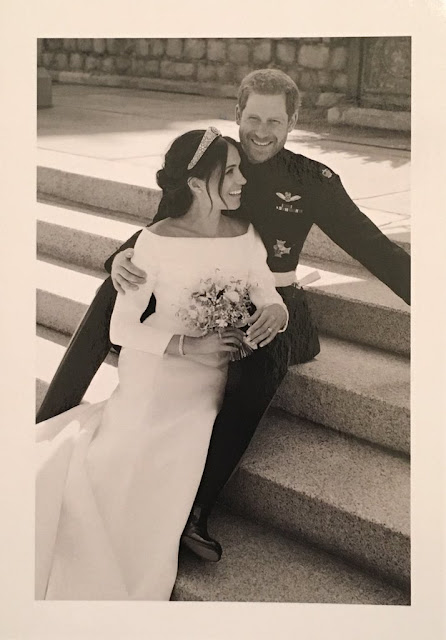 The photo is one of the couple's official wedding photos taken by Alexi Lubomirski at Windsor Castle. This was my favorite one of their wedding photos. I like how relaxed it seemed. But I'm not sure how I feel about a black and white photo being used for their photo reply. I think a colored photo would have been more elegant.

The message on the back of the card is the usual sort of thing. 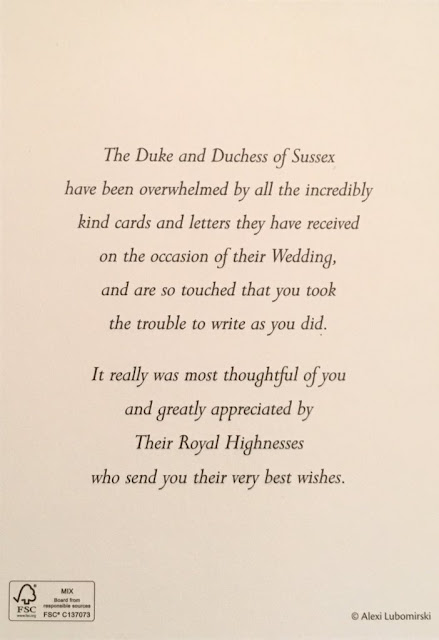 
The Duke and Duchess of Sussex have been overwhelmed by all the incredibly kind cards and letters they have received on the occasion of their Wedding, and are so touched that you took the trouble to write as you did.

It really was most thoughtful of you and greatly appreciated by Their Royal Highnesses who send you their very best wishes.

I also received a letter from Claudia Spens, head of the Correspondence Section at Clarence House, thanking me for the donation I made in honor of the couple's wedding. I had made a donation to Myna Mahila Foundation, which was one of the seven charities Harry & Meghan suggested well-wishers donate to in lieu of sending a gift. 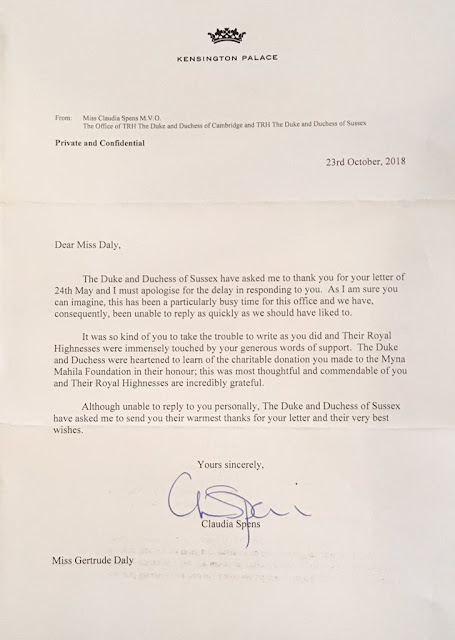 The Duke and Duchess of Sussex have asked me to thank you for your letter of 24th May and I must apologise for the delay in responding to you. As I am sure you can imagine, this has been a particularly busy time for this office and we have, consequently, been unable to reply as quickly as we should have liked to.

It was so kind of you to take the trouble to write as you did and Their Royal Highnesses were immensely touches by your generous words of support. The Duke and Duchess were heartened to learn of the charitable donation you made to the Myna Mahila Foundation in their honour; this was most thoughtful and commendable of you and Their Royal Highnesses are incredibly grateful.

Although unable to reply to you personally, The Duke and Duchess of Sussex have asked me to send you their warmest thanks for your letter and their very best wishes.

Back to Replies - Main Page
Posted by Gert's Royals at 1:02 PM