Over the years many of you have come to me worried about not having received a reply yet. My response to you has usually been, "You just need to be Patient. It will come; you just need to give it time." And this reply has certainly tested my patience.

I had written Queen Elizabeth II 7 months ago, in honor of her 90th Birthday in April, and today I finally received my reply. It has been a long wait. It started when a friend received his reply, postmarked The Queen's Birthday from Windsor Castle. I remembering thinking, they are really on top of things, and surely my reply can't be too far off.

Well, after the longest response time I've ever had, here it is. Unlike the Queen's usual responses, this is a card (accompanied by a note, apologizing for the delay).

The front of the card features the Queen's Royal Cypher, EIIR, which stands for Elizabeth II Regina. (Regina is Latin for Queen.) 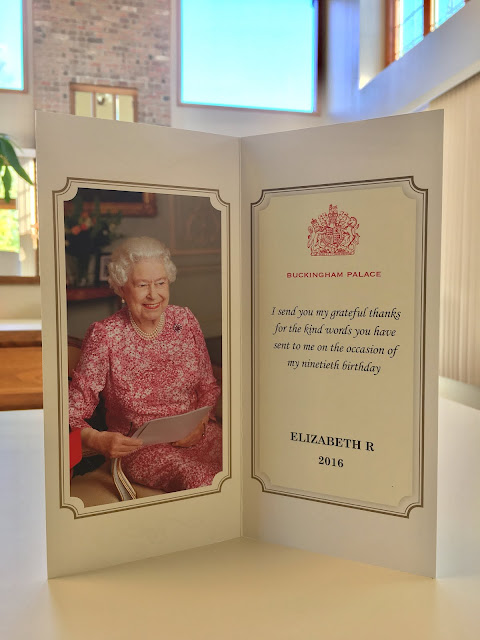 I send you my grateful thanks for the kind words you have sent to me on the occasion of my ninetieth birthday.

The photo on the inside of the card was released last year to mark the Queen becoming Britain's Longest Reigning Monarch.

This Mary McCartney photograph has been released to mark The Queen becoming the longest reigning British Monarch pic.twitter.com/ZrsUlIsB7n
— The Royal Family (@RoyalFamily) September 9, 2015

With the card was a little note apologizing for the delay. 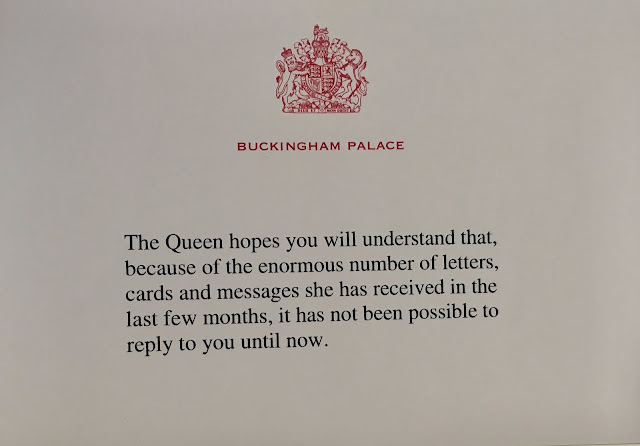 The Queen hopes you will understand that, because of the enormous number of letters, cards and messages she has received in the last few months, it has not been possible to reply to you until now.

It's a very lovely reply and certainly worth the wait!

Back to Replies - Main Page
Posted by Gert's Royals at 7:09 AM