Today I received a reply from Prince Harry for the birthday message I sent in September.

This reply certainly came a lot quicker than Prince William's birthday reply this year, which was an unheard of 4 months, which is the longest response time I've received so far. Clarence House had been backed up most of the summer, with the huge number of correspondences for Princess Charlotte's birth and then taking time off for the summer holiday.

This reply was mailed on October 30th, 1.5 months after Prince Harry's birthday. Last year's reply is postmarked October 3rd, so quite a bit quicker, but the delay in this year's response is understandable given Clarence House's busy summer and still falls into the normal response time. 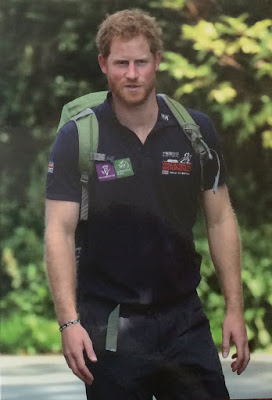 The front of the card features a photo by Chris Jackson, who coincidently also took the picture featured on Prince Harry's birthday response from last year. The photo was taken September 30th when Harry joined Walking with the Wounded for part of their 1,000-mile "Walk of Britain." 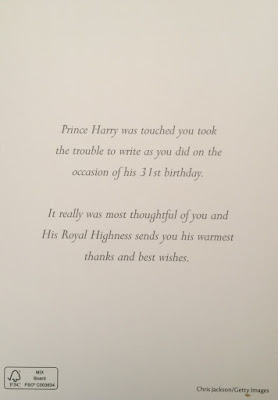 The reply on the back of the card is your standard birthday message. The message reads:


Prince Harry was touched you took the trouble to write as you did on the occasion of his 31st birthday.

Back to Replies - Main Page
Posted by Gert's Royals at 7:17 AM

A letter came today from Buckingham Palace. I had written to Queen Elizabeth on the occasion of her becoming the longest-reigning monarch in British History.

The envelope is the usual from the British royals.

The back of the envelope features the Queen's coat of arms. 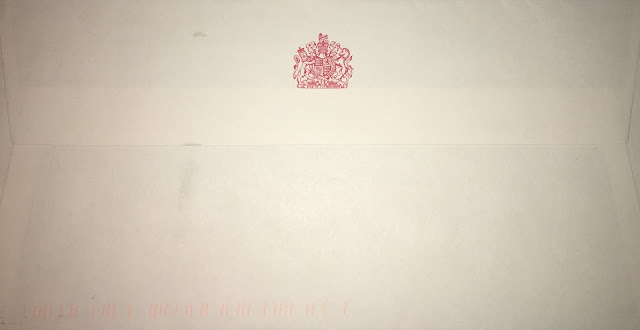 It is your basic form letter, the exact same most people will receive if they wrote to the Queen for this occasion. 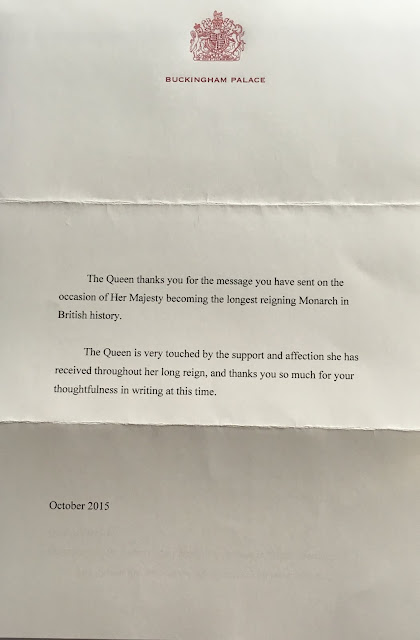 The Queen thanks you for the message you have sent on the occasion of Her Majesty becoming the longest reigning Monarch in British history.


The Queen is very touched by the support and affection she has received throughout her long reign, and thanks you so much for your thoughtfulness in writing at this time.

There isn't really too much to say about the letter. Even though this isn't the most exciting of letters, it will definitely hold a special place in my collection, since it represents such a defining moment in British History.

Prince Charles, if he ascended to the throne today, would have to live and reign to age 130, to surpass the Queen. And for every additional year of the Queen's reign, you would have to add 2 years to his "must reign too" age.

Back to Replies - Main Page
Posted by Gert's Royals at 6:07 PM