A very exciting piece of royal mail arrived today. from the UK.

It was from Duchess Camilla, thanking me for the Birthday wishes I sent her. The card is similar to last year's birthday reply, a picture with a typed message on the back, which she hand-signed. The card is double the size of the typical Cambridge/Harry reply. 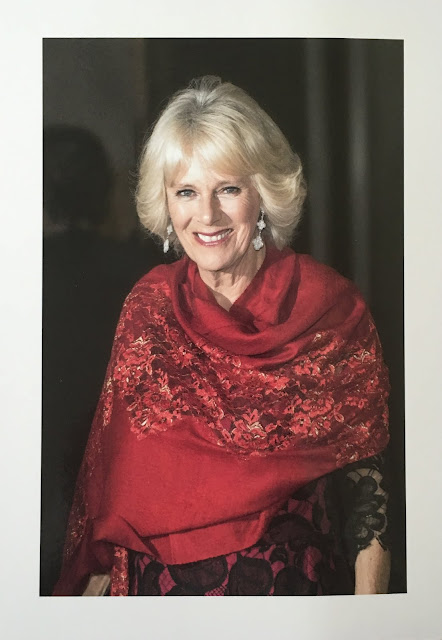 The picture is from October 2015, when Camilla attended the Man Booker Prize Award Ceremony. Camilla presented the award to the winner and gave a Speech.

The Man Booker Prize is a literary prize awarded to the best new novel, written in English and published in the UK. The Prize is awarded every year.

The name, Man Booker, comes from the award's founder & sponsors. The award was founded and sponsored in 1968, by the company Booker, McConnell Ltd (a food distributor). It was originally called the Booker–McConnell Prize. Over time the award became know, as simply, the Booker Prize.

In 2002, the Booker Prize broke off from Booker, McConnell Ltd, and started its own foundation, The Booker Prize Foundation. The Man group (an investment firm) became the Prize's new sponsor, and the award was renamed the Man Booker Prize.

Camilla is a big supporter of literacy and is Parton of a number of organizations that support literacy.

Camilla has attended the Man Booker Prize, every year as of late, and it is one of Camilla's favorite events. No surprise that a book lover like Camilla would choose something literary-themed for her birthday card.

By pure coincidence, I actually talked about some of Camilla's work with literacy in my Birthday letter to her, particularly the Roald Dahl 100th Anniversary. 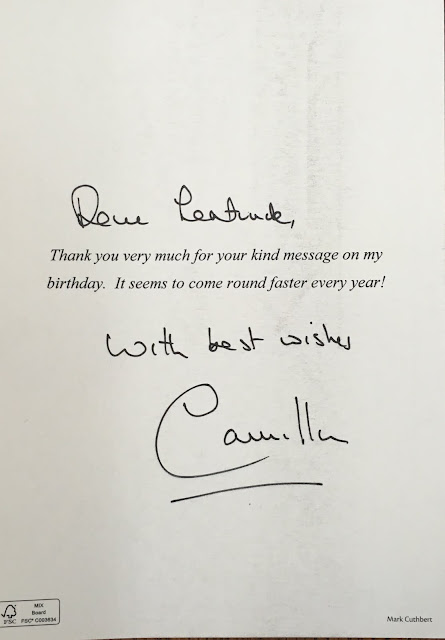 The back of the card is particularly special as well.  The message reads:

Thank you very much for your kind message on my birthday. It seems to come round faster every year.

I love the playfulness of the line: "It [Camilla's Birthday] seems to come round faster every year!" You also have to appreciate that Camilla took the time to hand-sign each card, and write the person's name.

The envelope looks like the normal royal mail. Since this was something that Camilla hand-signed, it was sent by registered mail. 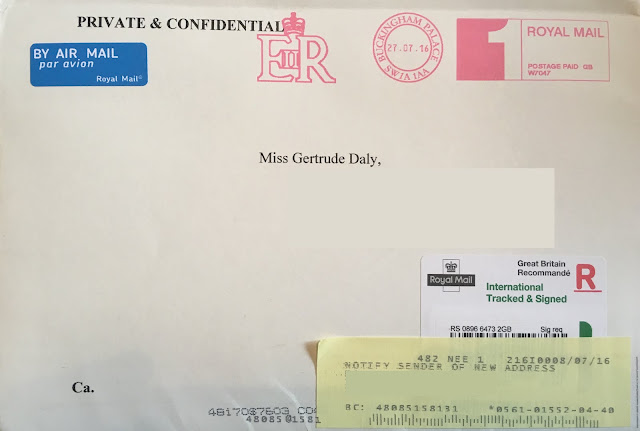 What is very very very interesting is, the letter was sent to my old address. I moved in February, long before I sent my letter for Camilla's birthday. I was able to check since I had typed them on my computer, both the letter and the envelope used my new address. So if you had just looked at what I sent, they would not have my old address.

This tells me Camilla's office stores people's address on their computer (which if you have to print them on the envelope each time they reply makes sense). So when they typed in my name, my old address came up.

The blue monogram on the back of the envelope tells us that this was sent from Clarence House.

This arrived over the weekend.I had written to Prince Philip, in June, for his 95th Birthday.The reply is almost exactly the same as last year's birthday Reply & written by the same person, Captain Frederick Moynan.Captain Moynan is an Assistant Equerry for Prince Philip. Equerry's are Officers in the Armed Forces who serve in a Royal's household for a 2 year period. Equerries often help coordinate engagements, travel, etc. The position rotates through the different branches of the Armed Forces every 2 years. (Should not be confused with the Crown Equerry, who is in charge of the Horses at the Royal Mews.)I would expect next year's reply will be written by someone else as Captain Moynan will likely have finished his time serving in Prince Philip's household.It took the Palace a little longer to send the birthday reply this year, as would be expected given that this was a milestone birthday. But this is still a very good response time!  The telephone number and fax are the general numbers for Buckingham Palace.You will notice that the letter referred to him as Prince Philip. Phillip's replies are the only ones I have seen from the British Royals who uses the royal's name.The Palace almost always refer to the royal by their title. This is why since his wedding Prince William has always been referred to as Duke of Cambridge and never Prince William by the Palace. This is the same reason why the Palace calls her Duchess of Cambridge and never Princess Catherine. They do the same with the other Prince and Princesses: It is always Prince of Wales, Duchess of Cornwall, Duke of York, Earl of Wessex, Duke of Kent, etc. and never Prince Charles, Princess Camilla, Prince Andrew, Prince Edward, Prince Edward, etc.(Harry, George, Charlotte don't have titles of their own, so they always use their name.)Since I know people will ask: No, I haven't gotten a reply for the Queen's 90th Birthday. Buckingham Palace has been very busy, but working hard. I keep seeing somebody get a reply every week or so, so they are working on it.Prince Philip's mail and the Queen's mail are dealt with by different offices at Buckingham Palace, so don't read anything into Philip's reply arriving first.
Posted by Gert's Royals at 3:34 PM