A letter arrived from the UK this week. I had written to Prince Philip last month to wish him a happy 97th birthday.

The envelope is the usual, with Prince Philip's badge on the back. You will notice that my address is printed on a sticker, that was then placed on the envelope. You will see this from time to time, mostly when envelopes are pre-stuffed with generic replies that can be sent to anyone who wrote for that occasion. 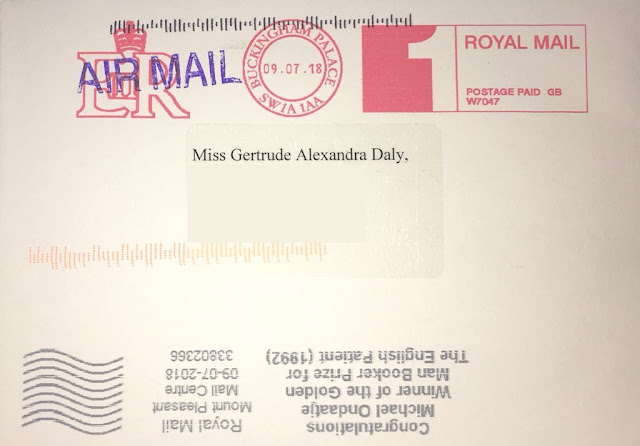 The reply is the usual form letter from Prince Philip's office. The birthday message changes slightly from year to year. This year's message is identical to his birthday reply in 2015. 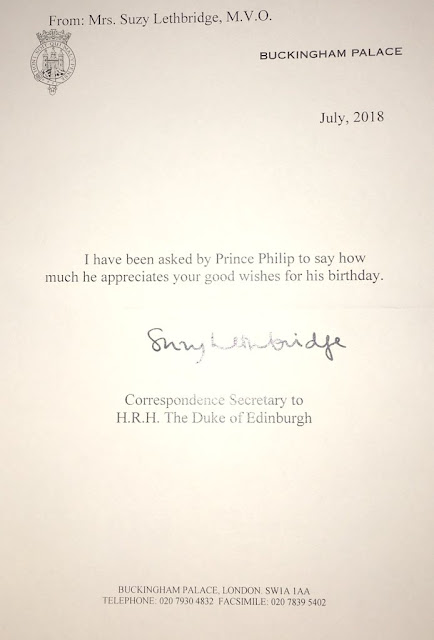 I have been asked by Prince Philip to say how much he appreciates your good wishes for his birthday.

Correspondence Secretary to
H.R.H. The Duke of Edinburgh

The address, telephone number and fax are the general numbers for Buckingham Palace.

A reply arrived from the UK this week. I had written to Prince William last month for his 36th birthday.

The envelope is the usual thing. Red postmark from the Court Post Office at Buckingham Palace. It then got an accidental 2nd postmark when it was taken to the Mount Pleasant Mail Centre. The 2nd postmark reads: "Art Fund, Museum of the Year 2018 Finalist, Tate St Ives." 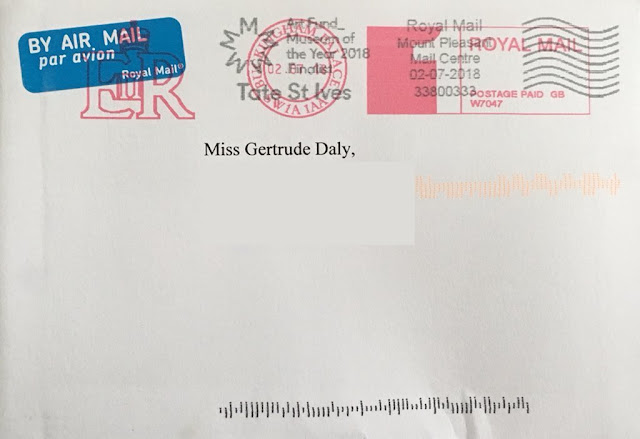 Some of you have asked if they have changed their envelope, as it appears to be lighter and not so thick. They definitely have. The new envelope (on the far right in the photo below) is by Premium Business (the name is printed on the inside of the envelopes). The Premium Business brand envelopes have a different flap on the back and are made of lighter/thinner paper than the old envelopes. (The Premium Business envelopes seem like a cheaper option, but still pretty nice.)

William, Kate & Harry changed their envelopes in 2016 as well. You can see the two previous envelopes (both by the same brand) on the left in the photo below. The main change was a slight difference in paper color and they switched from William, Kate & Harry each using their own colored monogram, to the black Kensington Palace Monogram for all 3, (which again was likely done to cut costs). William, Kate, Harry & Meghan do all still have their colored stationery which is going to be used them and their office at Kensington Palace for official things, but not the correspondence section at Clarence House which answers their mail from well-wishers.


The reply is the usual from Clarence House, a postcard-sized photo, with a typed message on the back. The photo is the same one from last year, from Prince William's British GQ spread. It is very common for them to reuse photos from a few years. 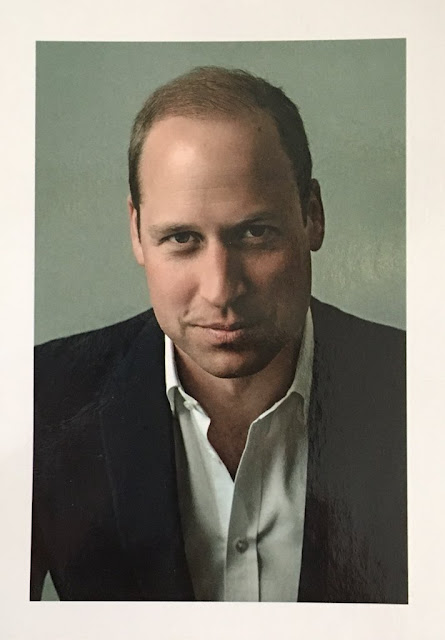 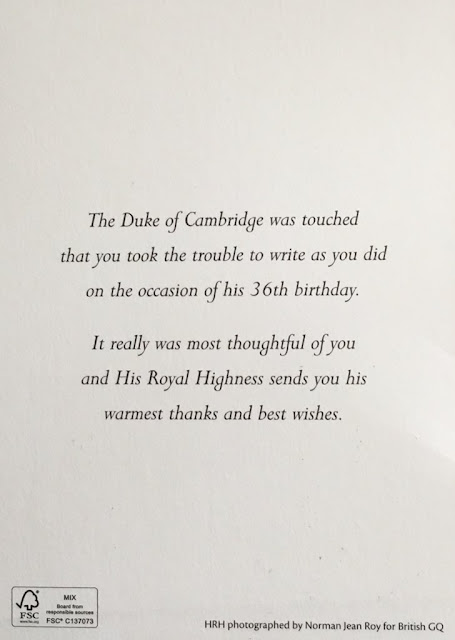 I saw on social media someone comment that the card seems thicker. It doesn't seem any thicker than what we've seen in the last 2 years. But in 2016, they did change to a little thicker paper for the cards which I think is nicer and maybe a bit more expensive.

And as we are talking about changes in mail over the years, I would also guess that the decision in 2017 to start using a white border for the photo replies was to cut costs. It uses a lot less ink. I know with postcards during WWI, they started using a similar white border around the edges and used 20% less ink. 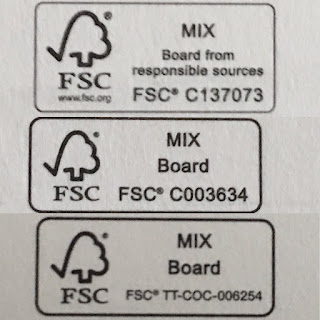 This card is marked as "Mix," meaning that part of the paper comes from a sustainable forest, and part from a non-sustainable (but still ethically and responsible managed) forest. And that the Forest Stewardship Council has certified all this.


I was able to track the FSC certification number on the bottom of the cards. It changes over the years, more for administrative reasons (e.g. company changed address), but the cards have always been printed by the same company (at least since I started writing in 2015), Clarendon Press Gloucestershire, which is located about 20 mins away from Highgrove. I have no idea if any of the paper used in the cards, originally came from Highgrove's sustainable forest, but I think it would be pretty cool if it did.

I'm sure many of you are about to freak out because you haven't gotten your reply for Louis' Birth, Sussex's Wedding, etc yet. Don't worry! Neither have I. It takes them time to reply to everyone. It's not unusual for people to write for the same thing and get replies months apart. Or for Clarence House to reply to things out of order.

And given that the Royals take August off, You might not get a reply until September (... or later)!