A lovely reply arrived this week from Luxembourg. I had written to Grand Duke Henri in April for his 65th birthday.
On the front of the envelope are two stamps of Hereditary Grand Duke Guillaume that were released to mark his 30th birthday in 2011. 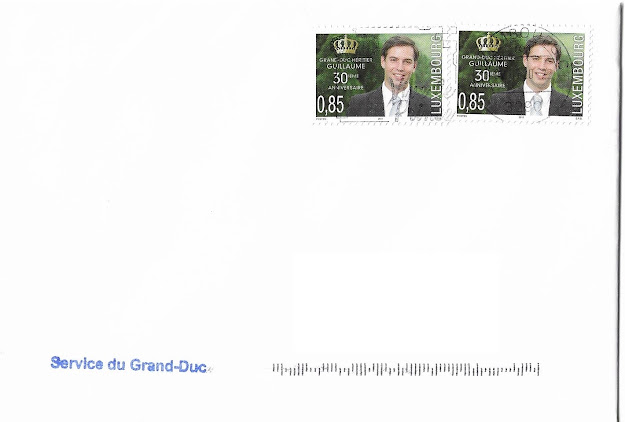 The postmark is a special postmark to celebrate the birth of Prince Charles of Luxembourg. It features the Grand-Ducal Crown in one corner and "Vive le Prince" (Long Live the Prince) in the opposite corner. 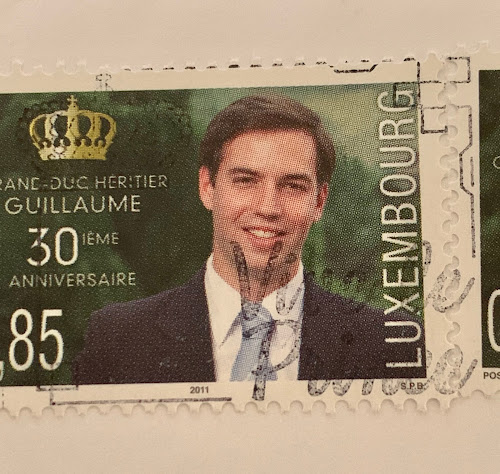 The back of the envelope features the Grand-Ducal Crown. 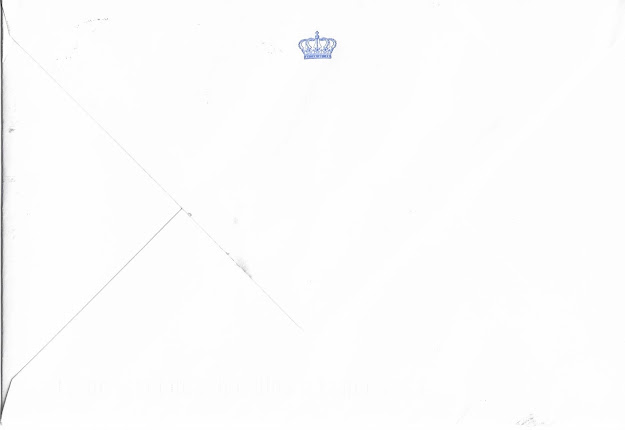 Inside are two cards. The first card is the usual sort of flat card with a typed message. 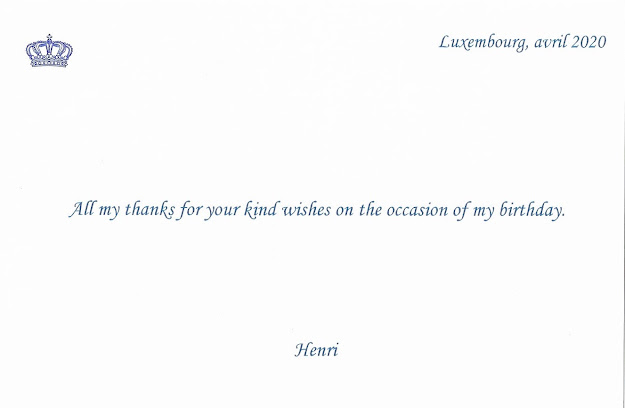 The card says:
Luxembourg April 2020
All my thanks for your kind wishes on the occasion of my birthday.
Henri
The date on the card corresponds with Henri's birthday, and not the date the card was actually sent.
The other card is a photo of Grand Duke Henri, that was taken by Lola Velasco. I am not 100% sure when this photo was taken, but it is over a decade old. & possibly taken just after Henri's accession. Besides throwback photos for anniversaries or condolences, I think this is the oldest photo I've gotten from the Royals.
This is only the 2nd time I have gotten a photo from the Luxembourg Royals. The first time was for Grand Duke Henri's birthday last year.
We can tell from the back of the card, that is was created by the German Souvenir company, Creation Gross (Gross means big in German).  The company creates souvenirs that they then sell to gift shops, tourist attractions, etc. It is interesting that the Luxembourg Palace bought postcards from a 3rd party, instead of just creating photo cards themselves, or contacting a printer directly. 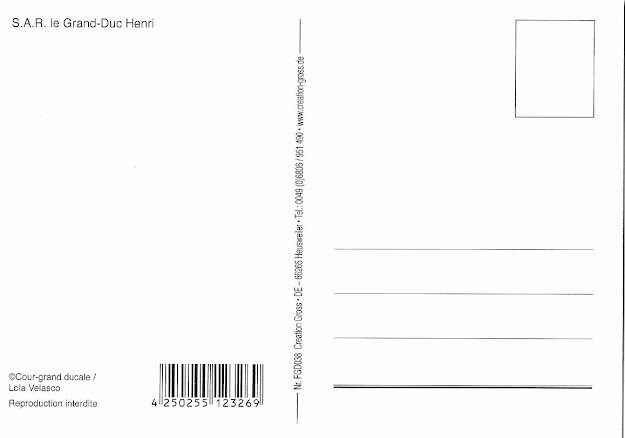 I have received a postcard before from the Liechtenstein Royals, but that is something they created themselves.
Back to Replies - Main Page
Posted by Gert's Royals at 4:12 PM

A lovely reply arrived from the UK today. I had written to Prince Charles & Duchess Camilla in April to wish them a happy 15th wedding anniversary.
The front of the envelope is the usual for the British Royals, featuring the red postmark from the Court Post Office at Buckingham Palace.  On top of that is a postmark from the Mount Pleasant Mail Center, where most international mail in the London Area is processed before heading to Heathrow Airport.
That postmark includes the message, "Royal Mail supporting youth mental health with Action for Children." Action for Children has been the Royal Mail's official charity to support since 2017. 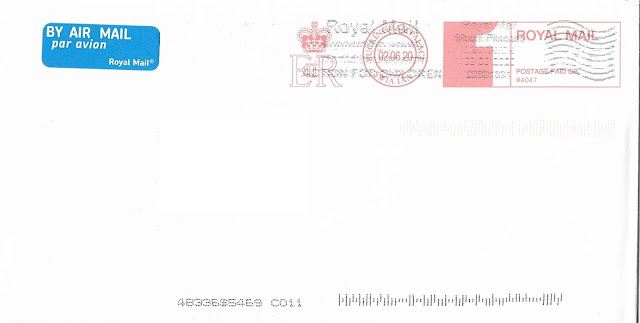 The back of the envelope features the Prince of Wales feathers. 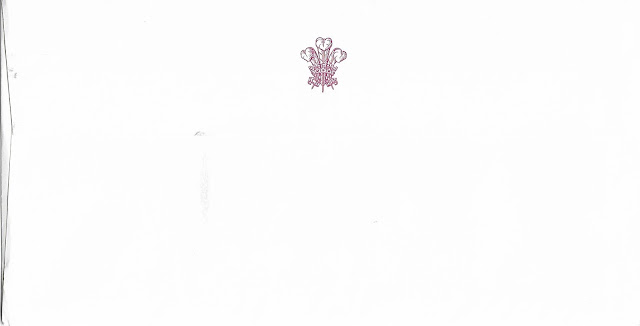 Inside is a letter from Claudia Spens, head of the correspondence section at Clarence House. The letter thanks me for my anniversary wishes and the good wishes I had sent following Prince Charles's coronavirus recovery.
One interesting this is the letter says May 22nd, but the envelope is postmarked over 2 weeks later on June 6th.
I also noticed that the letter doesn't use the term COVID-19, which is how Clarence House has been referring to it on social media, instead, Claudia used the more informal term "Coronavirus." 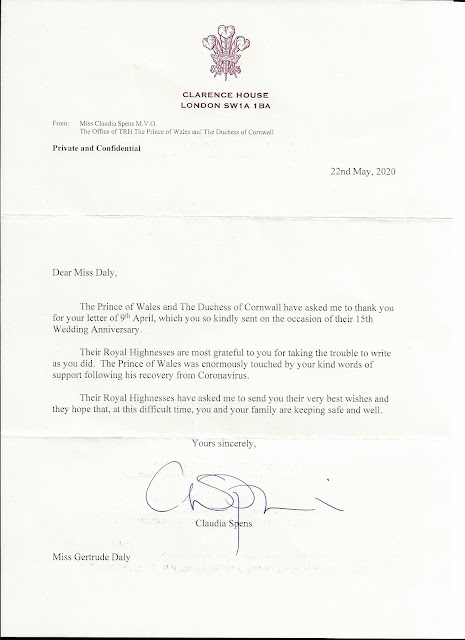 The Prince of Wales and The Duchess of Cornwall have asked me to thank you for your letter of 9th April, which you so kindly sent on the occasion of their 15th Wedding Anniversary.

Their Royal Highnesses are most grateful to you for taking the trouble to write as you did. The Prince of Wales was enormously touched by your kind words of support following his recovery from Coronavirus.

Their Royal Highnesses have asked me to send you their very best wishes and they hope that, at this difficult time, you and your family are keeping safe and well.

Back to Replies - Main Page
Posted by Gert's Royals at 4:42 PM