Writing to Princess Beatrice & Edoardo Mapelli Mozzi on Their Engagement

The Royals absolutely love to get letters and cards from the public, and special occasions like a Royal Wedding is no different!

You can find a lot of basic info on writing to the Royals under our "How To" tab. This will just cover some specifics about writing for the couple's engagement.

When to write?
Don't worry if you don't get your letter out right away. Two weeks or so after the engagement is a very acceptable time frame to send your congratulations. (& honestly, given how much mail they are going to receive, a slightly latter reply is fine as well.)

So, take your time. I am sure that we will be getting to know the couple a lot better in the next few days.

How to address the couple?
There are a lot of different ways you can address the couple in your letter, depending on if you want to be more formal and correct or more informal and every day. As long as you are being respectful and thoughtful, it is hard to go wrong. But some options are:

Where to send your letter/card to?

Letter to the couple should be sent to Prince Andrew's office at Buckingham Palace.


What to write?
Write whatever you feel like writing about. There is no one right answer. As long as you are being respectful and thoughtful, it is hard to go wrong.

You can send them a card or letter with a short, simple acknowledgment. Or you can gush about your feelings about the engagement and how amazing the couple is. (But do keep your letter to 1-page max!)

Can I send a Gift?
The Royals prefer that well-wishers make a donation to charity in lieu of sending a gift. Beatrice & Edoardo have not announced any specific charities they would like donations to be sent to. So feel free to donate to any cause that is meaningful to you. If you can't think of one, I would suggest donating to one of Princess Beatrice's Patronages, or some similar local cause.

And yes, it is perfectly fine to mention in your letter/card that you made a donation on their behalf to charity. They would love to hear about it.

What to expect?
Expect a much longer response time than usual! (I would expect at least 2-4 month, but it could even take as long as 6 months. And as always, they reply to letters as they get to them. So, just because someone got a reply, doesn't mean you will get yours in the next few days or weeks. It takes months to get through all the mail for a major event like this.)

The couple will likely reply with a card, similar to Princess Eugenie's engagement reply.

A lovely reply arrived today from Spain. I had written to King Juan Carlos to send him my best wishes for a speedy recovery following his triple by-pass surgery last month.

While I wrote to King Juan Carlos, this reply is actually from King Felipe's office, on behalf of King Felipe. I'm not sure why the letter was answered by his office and not Juan Carlos's. I wonder if it may have to do with the fact that King Juan Carlos officially retired from all royal duties earlier this year. So, undoubtedly his office has been substantially reduced.

The letter is written by Jaime Alfonsín, the head of King Felipe's Household. My 50th birthday reply from King Felipe was also written by Jamie Alfonsín. Whereas my letters from King Juan Carlos & Queen Sofia's office have all been written by Alfonso Sanz Portolés, their Head Secretariat. 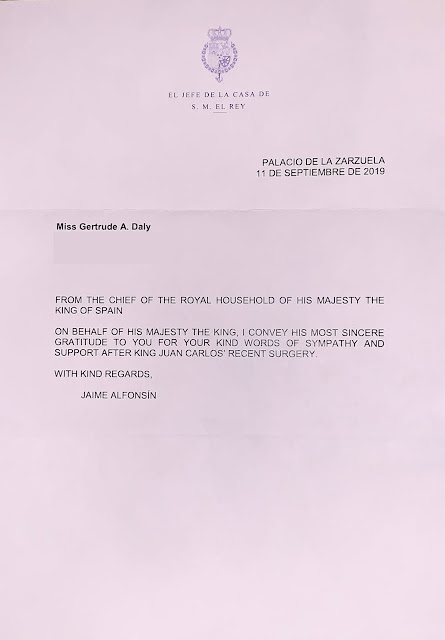 The Head of HM the King's Household


From the Cheif of the Royal Household of His Majesty the King of Spain,

On behalf of His Majesty the King, I convey his most sincere gratitude to you for your kind words of sympathy and support after King Juan Carlos's recent surgery.


This is the first letter I have gotten from the Spanish Royals in English.

Back to Replies - Main Page
Posted by Gert's Royals at 6:25 PM

A lovely reply arrived today from the UK. I had written to Princess Anne back in August to wish her a happy birthday.

The envelope is the usual from the British Royals. 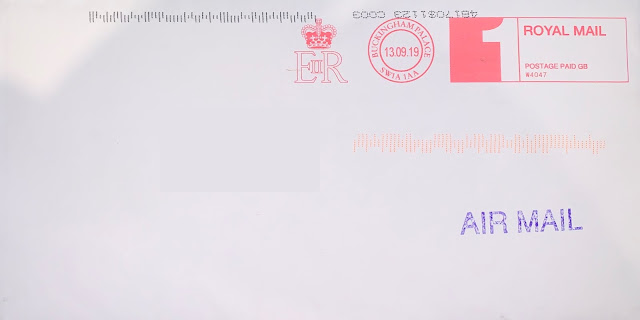 The back of the envelope features Princess Anne's coat of arms.

The letter is pretty much the same as Princess Anne's past birthday replies. It is written by Isabella Ward, Anne's Office Secretary. 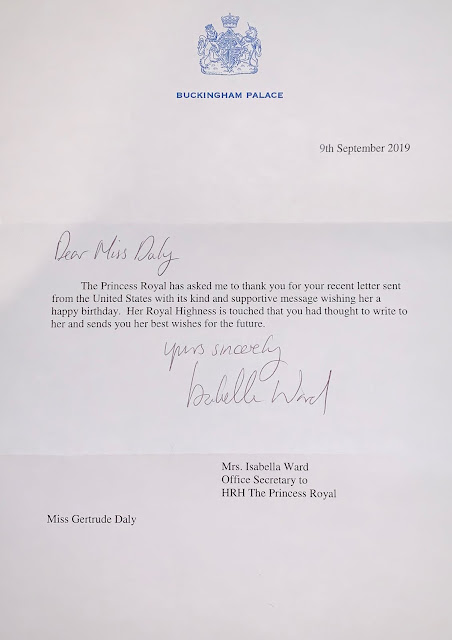 The Princess Royal has asked me to thank you for your recent letter sent from the United States with it's kind and supportive message wishing her a happy birthday. Her Royal Highness is touched that you had thought to write to her and sends you her best wishes for the future.

This reply arrived in 2017. I don't think I ever wrote a blog post about it. I had written to Prince William & Prince Harry in August 2017, to mark the 20th anniversary of Princess Diana's death.

There have been a few changes since then. The envelope is the usual from the British Royals, but this features the old postmark with the old W7047 PPI number.

It is interesting to note that this reply was sent exactly 2 years ago on Prince Harry's 33rd birthday.

The back of the envelope features the black crown/Kensington Palace. This is still currently being used by both the Cambridges and Sussexs. But the Sussexs are expected to update their stationery soon to reflect their office move to Buckingham Palace.

Inside is a letter from Claudia Spens, who is head of the correspondence section at Clarence House. This stationery is still used by the Cambridges and Sussexs. But you will note the "From" line says "The Office of TRH The Duke and Duchess of Cambridge and HRH Prince Henry of Wales." 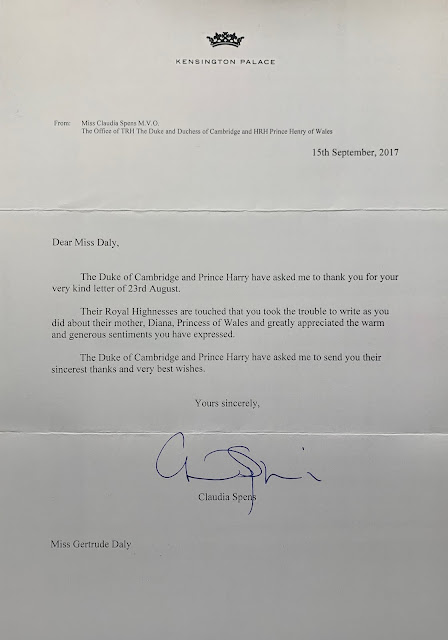 The Duke of Cambridge and Prince Harry have asked me to thank you for your very kind letter of 23rd August.

Their Royal Highnesses are touched that you took the trouble to write as you did about their mother, Diana, Princess of Wales and greatly appreciated the warm and generous sentiments you have expressed.

The Duke of Cambridge and Prince Harry have asked me to send you their sincerest thanks and very best wishes.

A lovely reply arrived today from Belgium. I had written to King Albert & Queen Paola for their 60th wedding anniversary in July.

The envelope is pretty usual from the Belgium Royals, although they have a lot of different versions. This one has a purple crown on the front and nothing on the back. 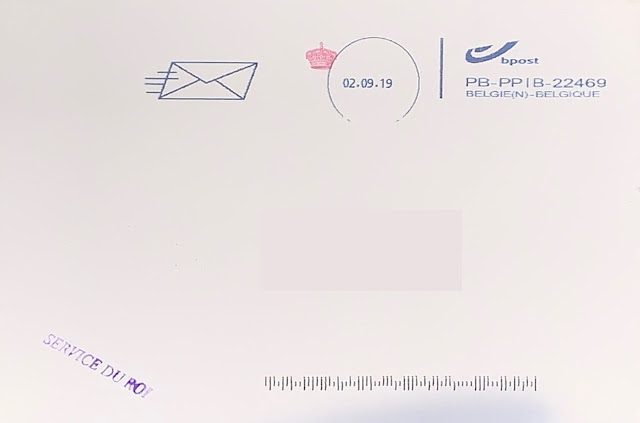 Inside is a flat card with a photo on the front and message on the back. 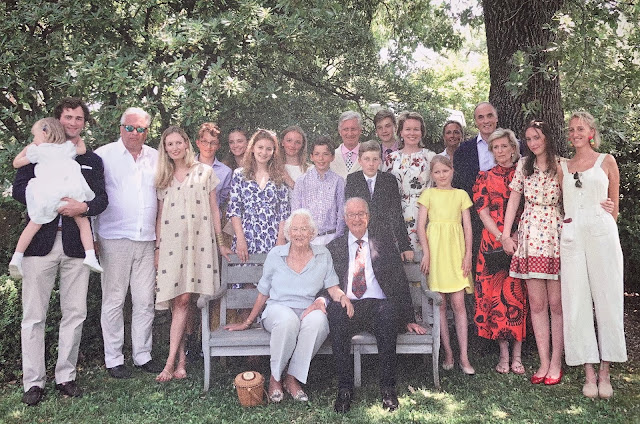 The photo was taken in July during the couple's anniversary celebration. This reminds me of Queen Paola's 80th birthday reply, which also featured a lovely family photo. 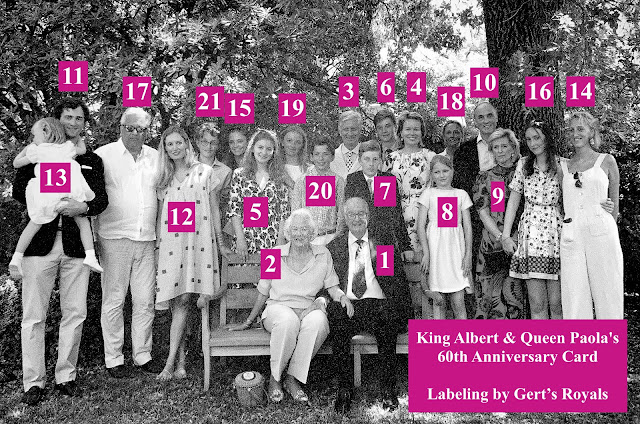 I have numbered the Royals in order of the family tree: 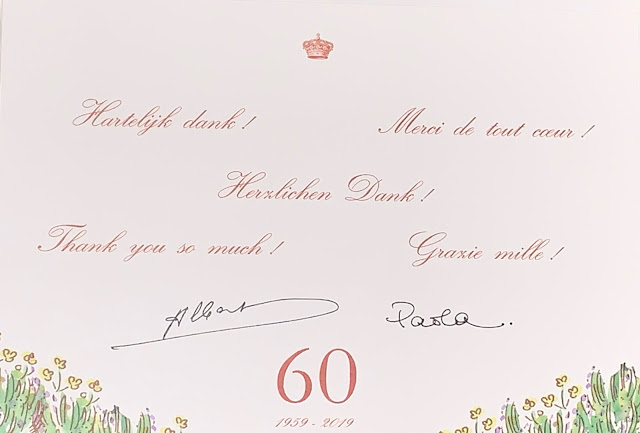 The back of the card has the message, "Thank You So Much!" written in 5 languages. The top 3 phrases are Dutch, French, & German, which are Belgium's 3 official languages. English is included as it is an international language. And the last language is Italian, Paola's native language.

The signatures a printed on, and are the same one we have seen on past replies from the couple.

The bottom of the card features a large 60, in honor of their 60th wedding anniversary, along with the length of marriage, 1959-2019.

Back to Replies - Main Page
Posted by Gert's Royals at 5:51 PM

A lovely reply arrived today from the UK. I had written to Prince Harry & Duchess Meghan to congratulate them on their 1st wedding anniversary in May.

The envelope is the usual from the British Royals. This one has got an accidental double postmark, as it was stamped once at the Court Post Office at Buckingham Palace (Red), and again at the Mount Pleasant Mail Centre (Black).

The black postmark is hard to read but says:


The law around
organ donation in
England is changing
#PassItOn 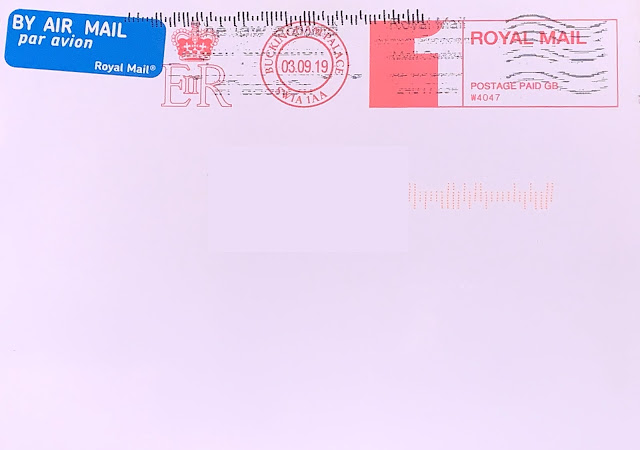 The back of the envelope features the Black Crown/Kensington Palace. The Sussexs have now officially moved their office into Buckingham Palace, but we will likely see them continue to use this stationary for awhile. 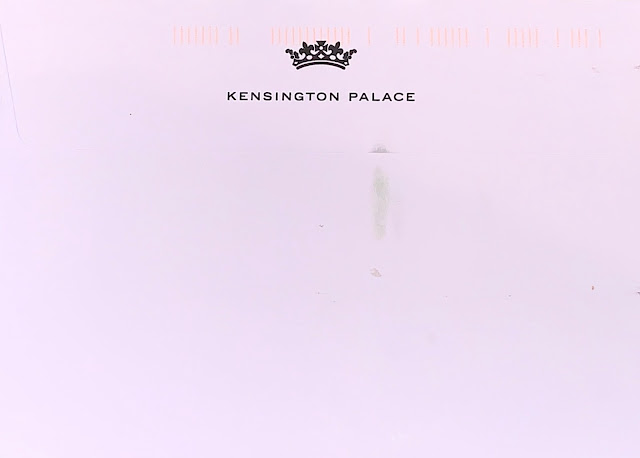 Inside is the usual photo card from Clarence House. 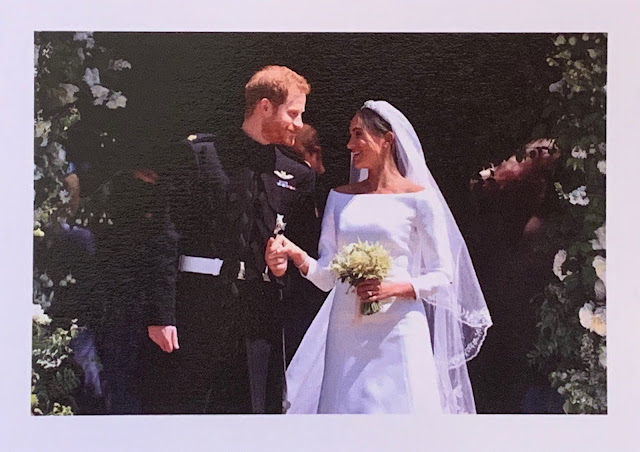 The back of the card features the usual sort of typed message. 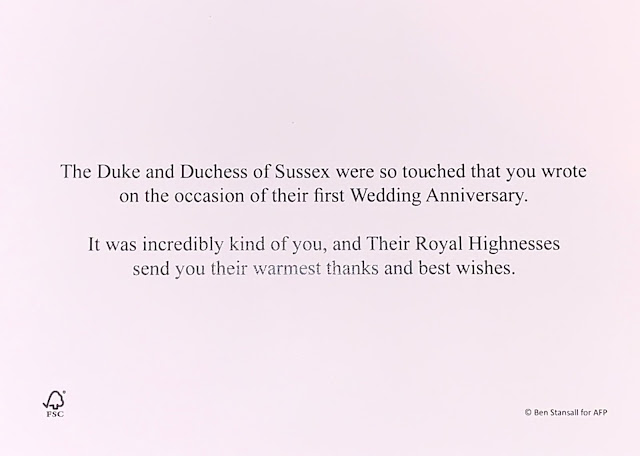 The Duke and Duchess of Sussex were so touched that you wrote on the occcasion of their first Wedding Anniversary.

It was incredibly kind of you, and Their Royal Highnesses send you their warmest thanks and best wishes.