Yesterday I received another reply from Monaco. The reply is from Prince Albert thanking me for writing to him on the occasion of his birthday. The Prince turned 57 on March 14th.

The note was quite typical of the couple, Prince Albert and Princess Charlene. It was written on a pre-typed card with his monogram (Charlene has her own, and the couple also has a joint one). The signature is printed on. Per usual, with Monaco, the note was bilingual, written in both English and French.

The note was dated the 14th, which is Prince Albert's birthday. Pre-typed notes often have the date of the special occasion, or else the month the reply was written.

The letter is postmarked the 24th. The letter took 6 days to arrive in the mail, which is sooner than average for Monaco.

Touched by your kind thoughts for my birthday, please accept my most sincere thanks.

Today, I got a letter in the mail from Sweden. The letter was from Princess Madeleine. I had written to Madeleine in January to congratulate Madeleine and her husband Chris on the announcement of their second child.

The letter was written by Princess Madeleine's Secretary, Anita Soderlind, on A5 sized paper (half sheet) and hand-signed. The paper is the nice quality you would expect from the Royals, with a watermark reading Swedish Bond. 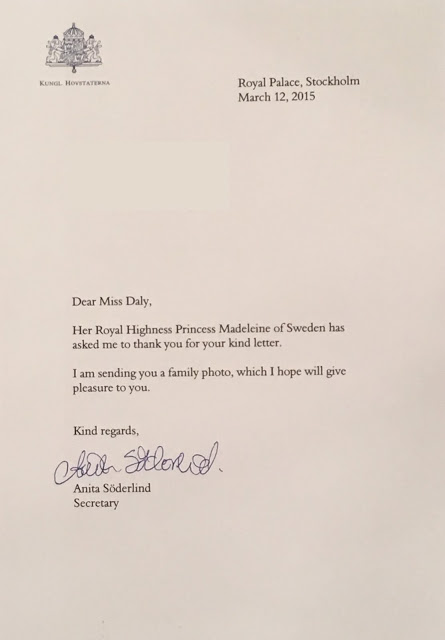 The letter was quite brief, but still is one of my favorites. Included with the letter is a picture of Princess Madeleine, her husband Christopher O'Neill and daughter, Princess Leonore (from Leonore's Christening on 8 June 2014, their 1st wedding anniversary). The picture was the same size as the letter. This is quite larger than the pictures sent by the Cambridges or Prince Harry. 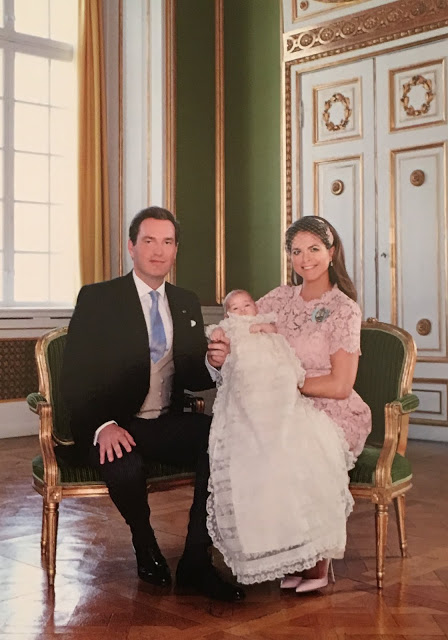 Princess Madeleine is due to give birth to their 2nd child in June of 2015, hopefully sometime after her brother's June 13th wedding, which she is scheduled to attend.

I received a reply today from Monaco. The reply is from Princess Charlene, thanking me for writing to her for her birthday, January 25th.

The note is bi-lingual written in both French and English, the two commonly spoken languages in Monaco. The note is fairly simple and typical of what you usually see from Monaco.

Very touched by your thoughtfulness expressed on the occasion of my birthday, I would like to thank you most sincerely.

Condolences for the Death of Queen Fabiola of Belgium (2014)

Today, I got a response to the letter of condolences I wrote to King Philippe of Belgium on the occasion of his aunt, HM Queen Fabiola's death. Her Majesty died December 5th, 2014 at the age of 86.

Doña Fabiola de Mora y Aragón was born on June 11th, 1928 in Spain to a noble family. Queen Victoria Eugenia of Spain was her godmother. Fabiola trained as a nurse and worked in a hospital in Madrid. At the age of 32, she married King Baudouin of Belgium. They, unfortunately, had no children. When her husband, King Baudouin, died in 1993, he was succeeded to the throne by his brother, King Albert II of Belgium. ( King Albert II abdicated the throne in 2013, to his son, King Philippe.) Queen Fabiola supported women's issues, children and mental health.

This was the very first time I've written to the Belgium Royals. The note was written in French. Belgium has three official languages: Dutch, French, and German. 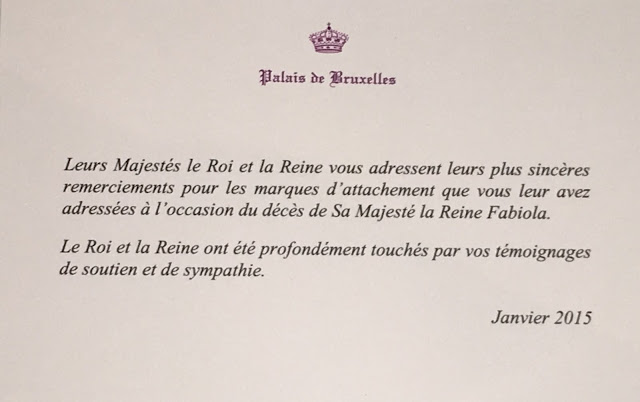 Their Majesties the King and Queen send you their most sincere thanks for the kind words that you have sent to them on the occasion of the death of Her Majesty Queen Fabiola.

The King and Queen were deeply touched by your words of support and sympathy.

Also included was a commemorative card from Queen Fabiola's funeral. The cover of the card features Queen Fabiola's monogram, as well as a picture of the Queen when she was young (circa 1960s). The inside of the card read "Always say YES to God" in Dutch, French, German, Spanish and English. (Queen Fabiola was born in Spain, which is why Spanish is included.) 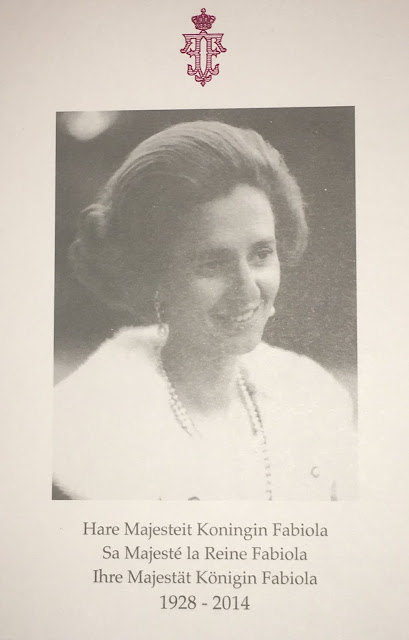 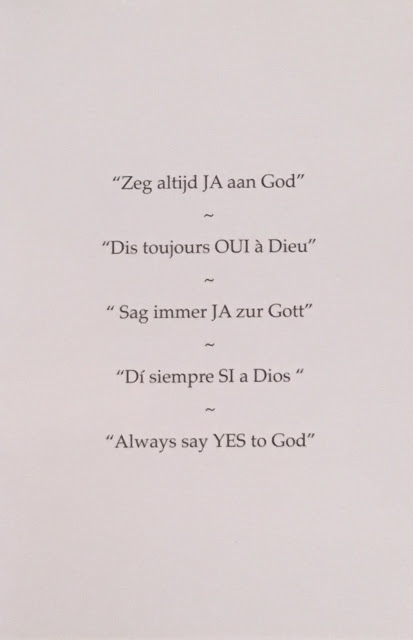 Today in the Mail I got a response from Crown Prince Frederik and Crown Princess Mary of Denmark for my Christmas letter I sent them back in December. This was the very first time I've written to the Denmark Royals.

The reply was mailed on 20th January and sent Economy. It took 45 days to arrive. The British Royal Family (~6 Days in mail) and Monaco (~11 Days) usually send their mail priority. 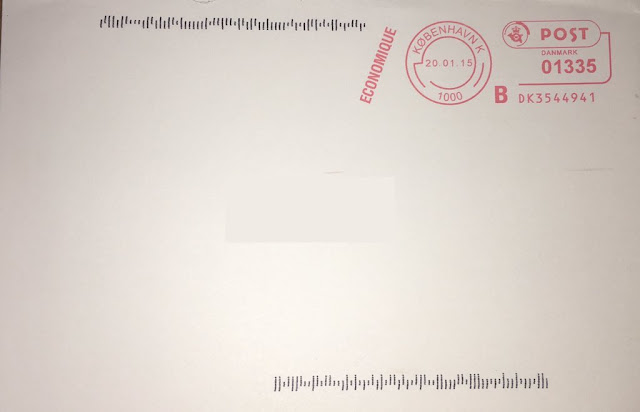 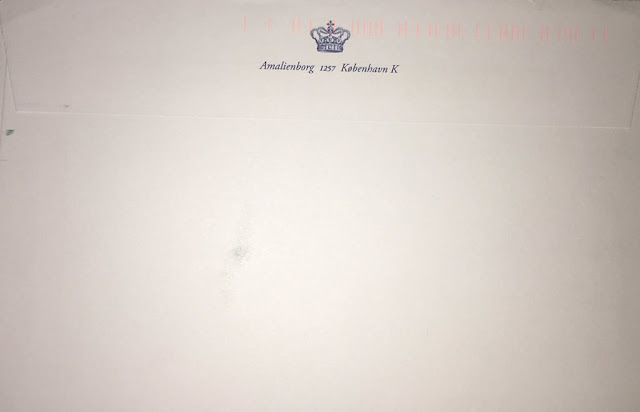 Inside is a pre-made response. Interestingly though it is not bilingual like Monaco's Christmas Card. But the part in blue is in Danish. 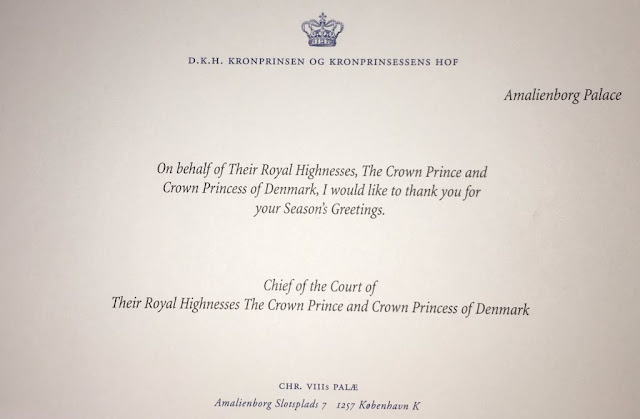 On behalf of Their Royal Highnesses, The Crown Prince and Crown Princess of Denmark, I would like to thank you for your Season's Greetings.


Chief of the Court of


Back to Replies - Main Page