A lovely reply arrived from the UK today. I had written in May for Princess Charlotte & Prince Louis's birthday. Last year, I had written separate letters for the two kids' birthdays. 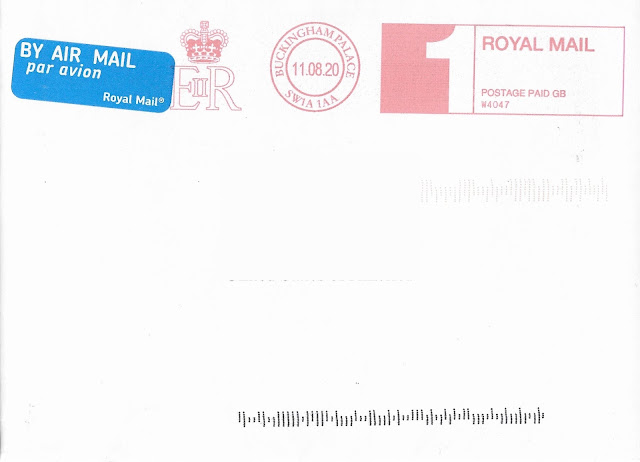 The back of the envelope features the Black Crown/Kensignton Palace that the Cambridges have been using since 2016. 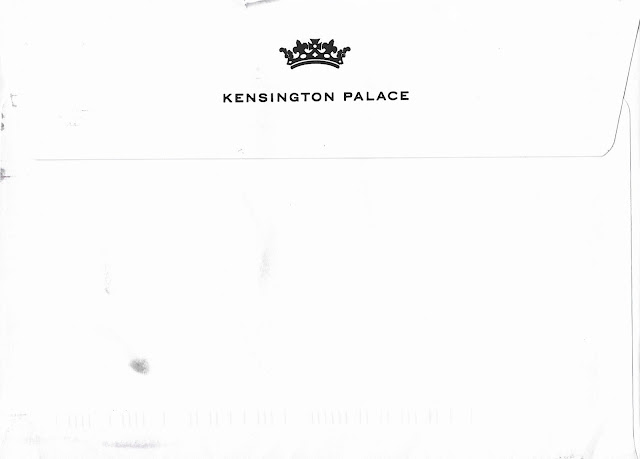 Inside are two photo cards that are pretty identical and the same type we have been seeing for years. 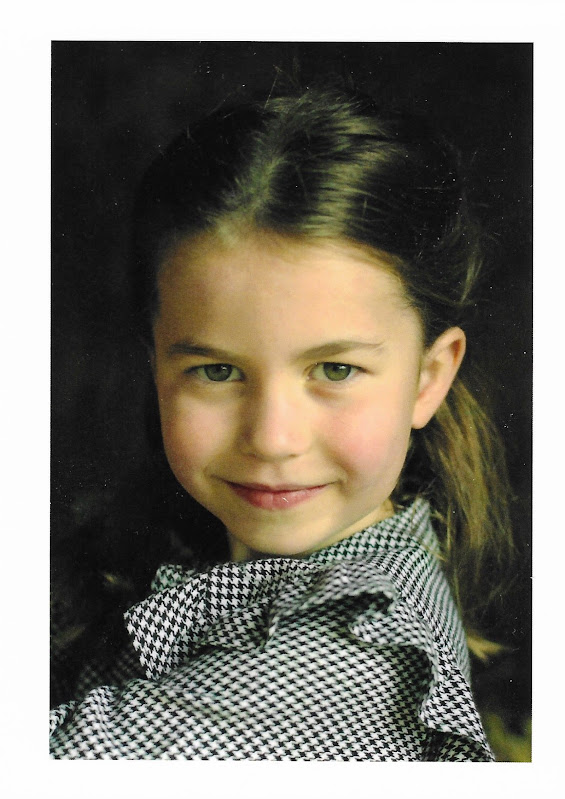 The back of the card features the Black Crown/Kensington Palace along with a typed message. The message is the same as last year's except for Charlotte's age. 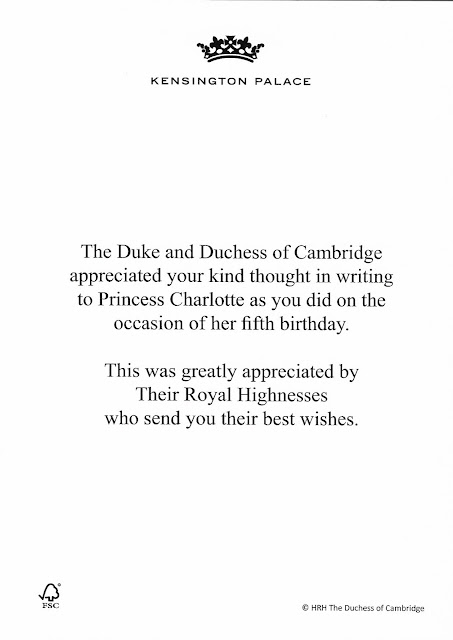 The Duke and Duchess of Cambridge appreciated your kind thought in writing to Princess Charlotte as you did on the occasion of her fifth birthday.

Prince Louis's photo card also features a photo taken by Duchess Kate. This photo is from the same set of photos released for his birthday in April, although this photo was never officially released. This is the 2nd time I've gotten a reply from the Cambridges that used an unreleased photo. The 1st time was their 5th wedding anniversary reply. 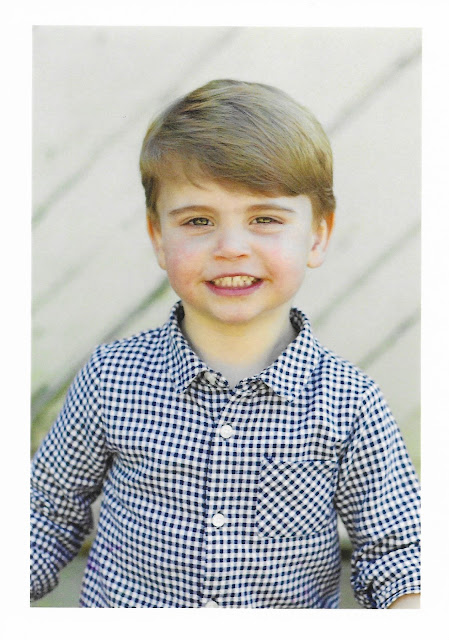 The back of the card features the same message as Princess Charlotte's card except for the obvious changes. 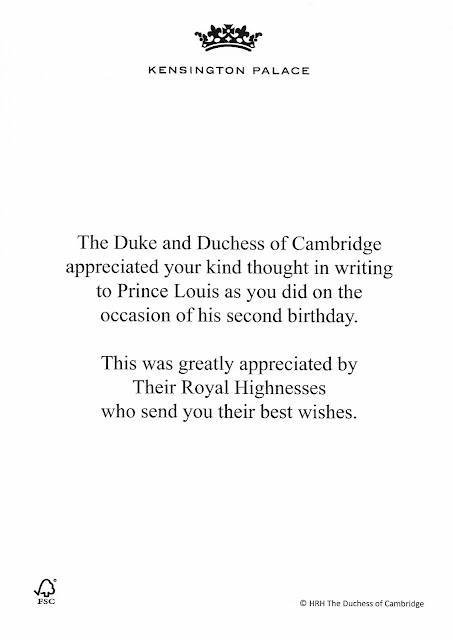 The Duke and Duchess of Cambridge appreciated your kind thought in writing to Prince Louis as you did on the occasion of his second birthday.

A lovely reply arrived today from Monaco. I had written to Prince Albert in April to congratulate him on the 15th Anniversary of his Accession.

The front of the envelope is the usual sort of thing. The text in the left upper corner says, in French: "Service of H.S.H. The Prince of Monaco."

The back of the envelope is blank. And from the feel of the paper and inside of the envelopes we can see that this is different than what we usually see from the Monaco royals. Normally they use a high-quality envelope that matches the reply's paper. But, of the few letters I have received from Monaco, they have all come in a business envelope like this. 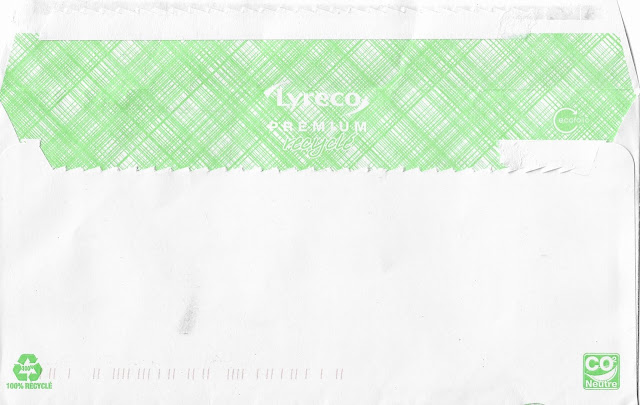 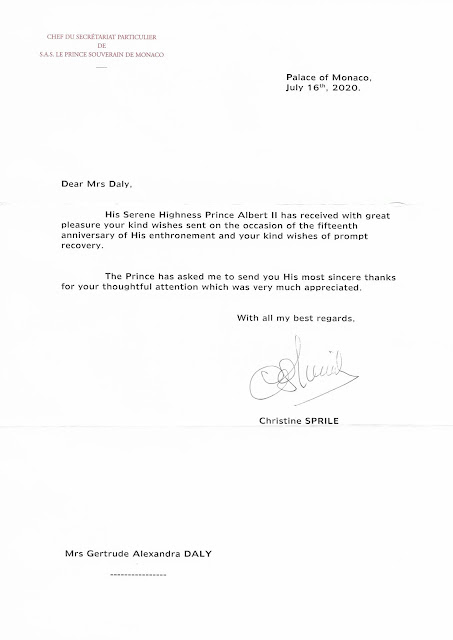 HSH the Sovereign Prince of Monaco

His Serene Highness Prince Albert II has received with great pleasure your kind wishes sent on the occasion of the fifteenth anniversary of His enthronement and your kind wishes of prompt recovery.

The Prince has asked me to send you His most sincere thanks for your thoughtful attention which was very much appreciated.

A lovely reply arrived last week from the UK. I had written to the Queen in April to wish her a Happy Birthday.

The front of the envelope looks pretty much the same as most of the other British Royals. There is however one thing on the front that tells me this is from the Queen. The Queen's office is the only one who will write my first initial "G," instead of spelling out my full first name.

The envelope features the postmark from the Court Post office at Buckingham Palace. 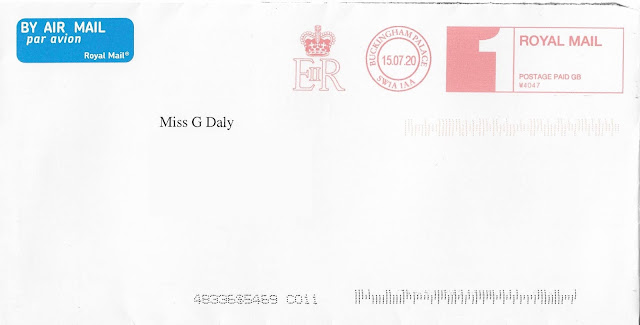 The back of the envelope features the Queen's Coat of Arms.

Inside is a typed letter. For the Queen's birthday each year, we see a variety of responses, from a personal letter from a lady in waiting, a form letter signed by a lady-in-waiting, and then this, an unsigned form letter. It tends to be the more personal replies are sent first and then they get more generic as time goes by.
This letter is written on Windsor Castle stationery. But as we can tell from the postmark, this was sent from Buckingham Palace as it was processed through the Court Post Office at Buckingham Palace. This is my first birthday reply from the Queen to be sent on Windsor Castle Stationary. 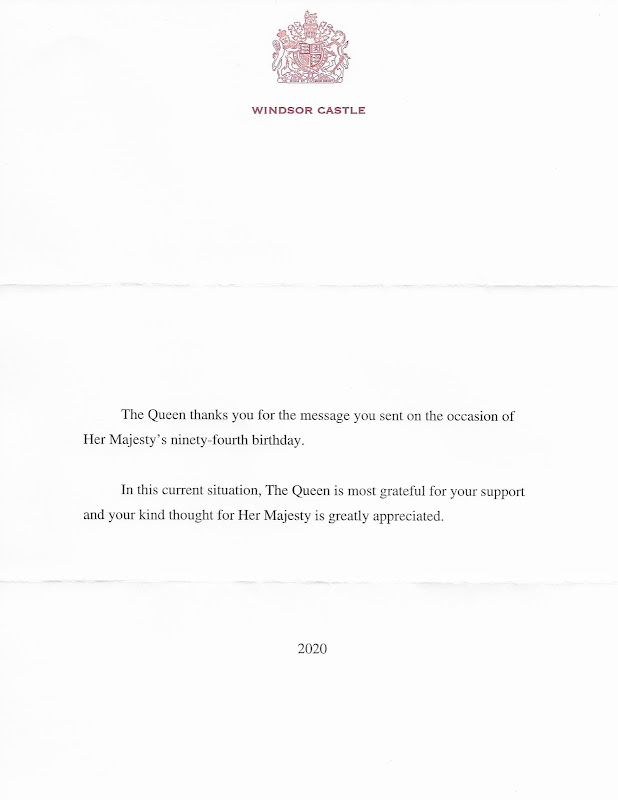 The Queen thanks you for the message you sent on the occasion of Her Majesty's ninety-fourth birthday.

In this current situation, The Queen is most grateful for your support and your kind thought for Her Majesty is greatly appreciated.
2020

Back to Replies - Main Page
Posted by Gert's Royals at 5:19 PM

A lovely reply arrived this week from Monaco. I had written to Prince Albert in March for his birthday. This reply came about 4.5 months later, which is one of the longest response time I have had from Monaco.
The stamp is for the 44th Monte Carlo International Circus Festival which took place on January 16th-26th. Each year, the Monaco Post releases a new stamp in celebration of the festival. (Princess Stephanie is President of the Festival.)
The postmark is for the Museum of Prehistoric Anthropology in Monaco. This postmark ran the week of July 13th-18th, ran again in August & will run again in September. This is one of those postmarks that is used multiple times a year when there isn't a special postmark. 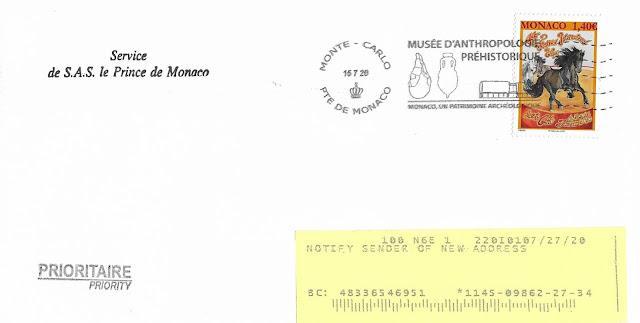 The back of the envelope features Prince Albert's monogram.

Inside is a flat card. This card is the same as Prince Albert's past birthday replies, except the message has been changed and the date updated.
The monogram is embossed. And the signature is printed on. The date is Prince Albert's birthday. 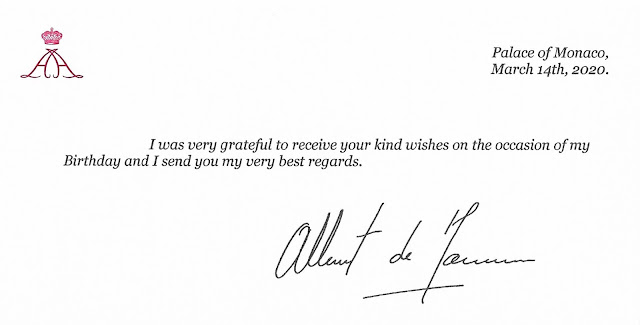 I was very grateful to receive your kind wishes on the occasion of my Birthday and I send you my very best regards.

Back to Replies - Main Page
Posted by Gert's Royals at 3:59 PM

A lovely reply arrived this week from Denmark. I had written to Crown Prince Frederik for his birthday in May.
The front of the envelope is the usual. 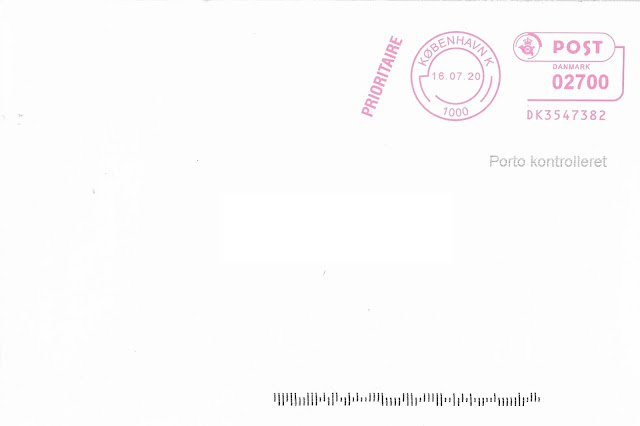 The back of the envelope features a crown with the address for Amalienborg written underneath. This is the envelope the couple has been using for years. 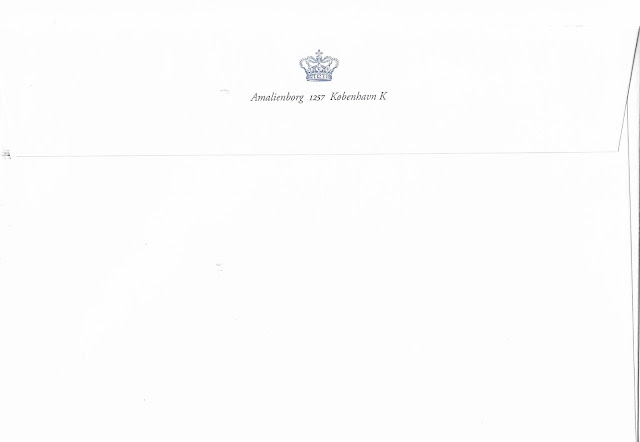 Inside is a flat card. This is the same card I've received for a number of Crown Prince Frederik's past birthday. But, what is interesting is that the couple redesigned their cards in 2017. And this card features their old style. The reason is for things like birthdays, The Crown Prince Couple print off a bunch of cards that can be used for multiple years. And, so this is just a leftover. They will switch over to the new design next time they need more.
However, Frederik's Birthday Reply last year did feature the new design, as they printed off a unique card for his 50th birthday. 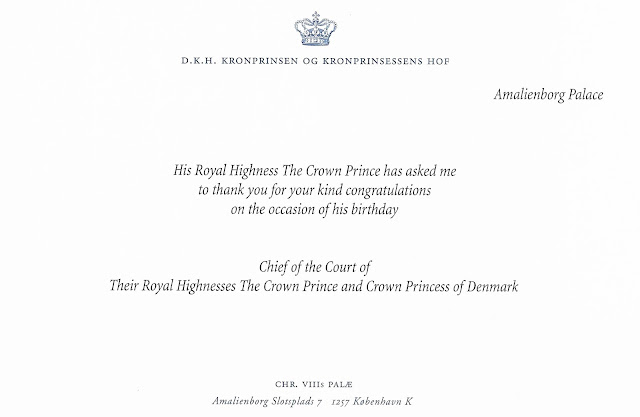 Back to Replies - Main Page
Posted by Gert's Royals at 3:39 PM