Today, I received a reply from King Harald of Norway. I had written to him in February for his 79th birthday.

The envelope is the usual from the Norway Royals. "Det Kongelige Hoff" in the bottom corner is Norwegian for "The Royal Court."  The envelope is postmarked 16 April, just under two months after his birthday. 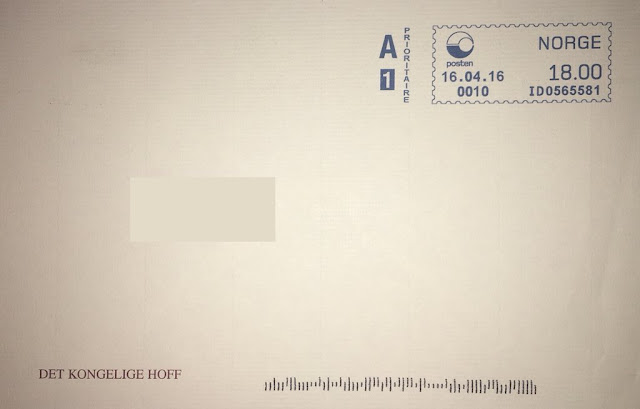 The letter looks exactly like the other letter I had received from Queen Sonja for her birthday last year. The letter is printed on a half-size sheet of paper. 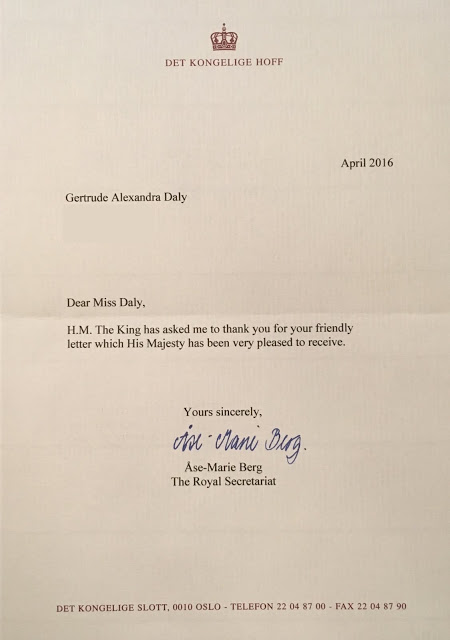 H.M. The King has asked me to thank you for your friendly letter which His Majesty has been very pleased to receive.

The letter is nice, but it doesn't mention why I wrote, which confused me. I had sent three letters over the last few months to the Norway Royals (Christmas, Silver Jubilee in January, and King Harald's 79th Birthday in February) and this was the only reply I've received. I was able to figure out that this was in reply to my birthday letter since I had moved in late January, and the birthday reply was the only one that used my new address.
The words "friendly letter" made me smile. Usually, they just write "your letter" or thank you for your "kind wishes."
The letter is hand signed by Åse-Marie Berg, who is one of the Palace's Royal Secretariats. Royal Secretariat is a department in the Royal Household that organizes engagements, responds to invitations, answers mail, etc. Should not be confused with a Private Secretary.

Back to Replies - Main Page
Posted by Gert's Royals at 7:19 PM

So I must admit I was utterly puzzled when I arrived home today and found two envelopes from the Belgium Royal Palace waiting for me. I could remember one recent letter I had written, but I could not for the life of me remember the 2nd letter. 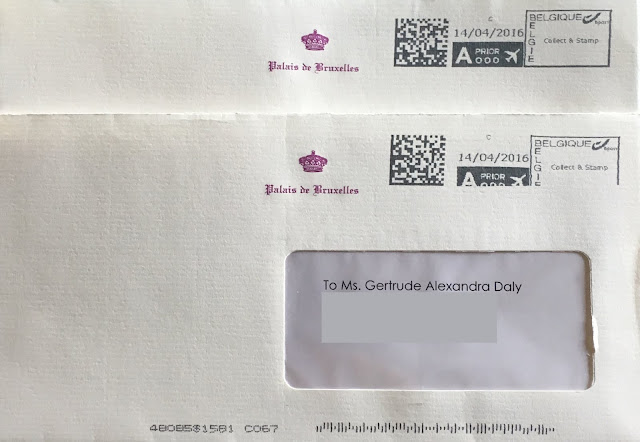 Sheepishly, I opened the two envelopes to see what I had forgotten and found that it wasn't my mistake, it was the Palace's. For some reason, they sent me two copies of the same letter. They are exactly the same, except for the small differences of two hand-signatures.

I had written for King Philippe's 56th birthday, on April 15th. But had also expressed my sympathies for the recent attack in Brussels. 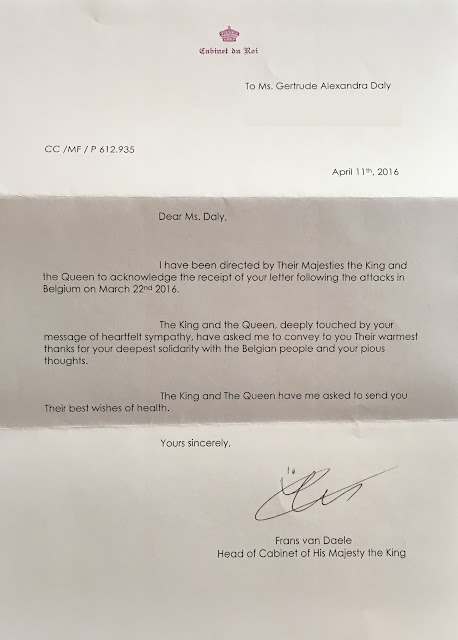 I have been directed by Their Majesties the King and the Queen to acknowledge the receipt of your letter following the attacks in Belgium on March 22nd, 2016.

The King and the Queen, deeply touched by your message of heartfelt sympathy, have asked me to convey to you Their warmest thanks for your deepest solidarity with the Belgian people and your pious thoughts.

The King and The Queen have asked me to send you Their best wishes of health.

Yours sincerely,
Frans van Daele
Head of Cabinet of His Majesty the King

This is the first time I have ever received a letter from the Belgium Royals, previously I've just received cards. The letter makes no mention of the fact that I had written for the King's birthday.

One thing I found very interesting was the letters and number on the top of the page, CC /MF /P 612.935. I have no idea what they mean. I assume they are some sort of way of documenting this letter.

The letter was written by Frans Van Daele, the Head of the King's Cabinet. The reply came super fast, it was written about the same day it was received.

As I said, I received two identical letters. But, one of the letters was accompanied by two pictures. (The other letter had no pictures.) 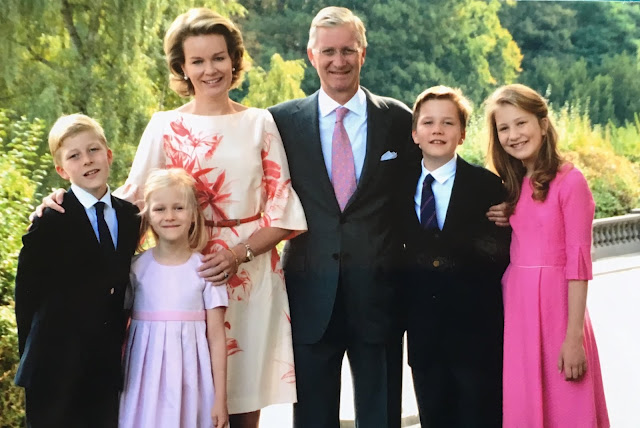 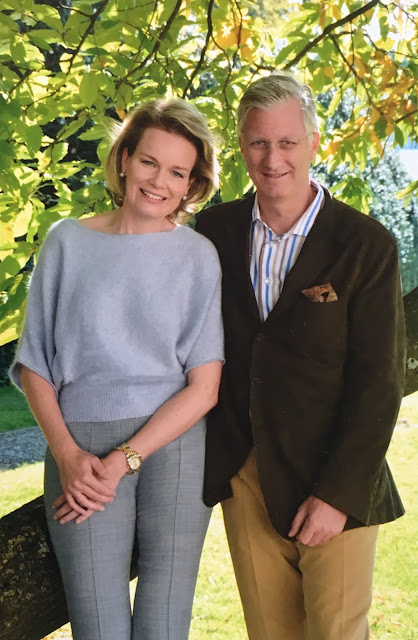 A lovely reply arrived from Prince Albert of Monaco. I had written for his Birthday in March.

The envelope looks exactly like you would expect from Monaco.

What got me really excited was the stamp.  Not just because I love Monaco's stamps, but because I mentioned the Lillehammer Youth Olympics in my letter to Prince Albert. So it was a lovely touch they used the Lillehammer stamp on the envelope. The stamp is from February, which is pretty recent. Monaco's stamps on replies aren't always that recent. So, I would like to think this stamp was used because I mentioned the Games in my letter.

Even though Monaco has zero Olympics medals and only 1 Youth Olympic medal, Prince Albert has always proudly supported and encouraged Monaco's athletes. Prince Albert flew to Norway in February to watch Monaco's one athlete competing in the Youth Olympic Games. And we, of course, expect to see him at the Rio Olympics this summer. (I'm thinking it will be unlikely Charlene and the twins, Gabriella and Jacques will join him. But you never know.) Currently, Monaco does not have any Athletes qualified for the Rio Olympics. But there is still time, and they haven't missed a Game since 1980.

Monaco is usually very predictable when it comes to sending replies. They usually send pre-made cards, DL sized (i.e. size of a normal envelope), on very nice quality paper, and often with the message in English & French. The reply will have the Royals' monogram (either engraved or embossed) and their signature printed on.

The message says:
I would like to thank you warmly for your kind birthday wishes
Albert de Monaco
Back to Replies - Main Page
Posted by Gert's Royals at 4:58 PM