Back to Main Page

A lovely reply arrived from Monaco yesterday. I had written to Prince Albert & Princess Charlene to wish them a Merry Christmas.

The envelope features a special holiday postmark "Meilleurs Voeux," which is French for Best Wishes/Happy New Years. This postmark was stamped on all the mail in Monaco from December 21st, 2020 to January 9th, 2021.

The stamp depicts the poster of the 1939 french film "L'Incomme De Monte Carlo," (The Unknown of Monte Carlo). The film was a remake of the Italian film "La signora di Montecarlo." The stamp is part of the Monaco Post's cinema series. This stamp was launched in October 2020.

I was glad to see that the Monaco Royals have finally started using my new address, as opposed to pulling my old address from their database. (Although I did notice they spelt the name of my street wrong and listed the country twice.) & The funny thing is though, I am moving again next month. So, we will see how long it takes them to update their system with my new address. 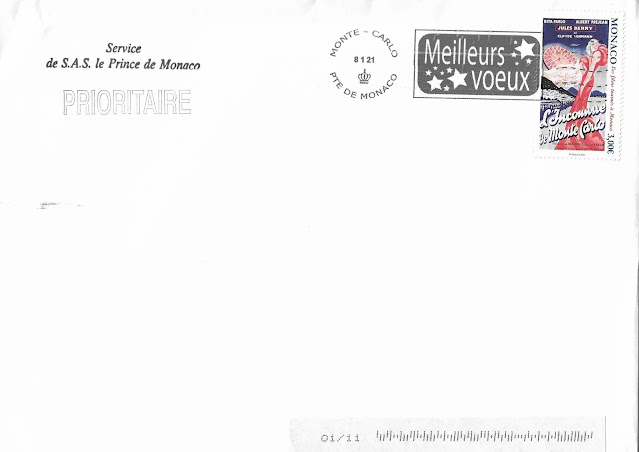 The back of the envelope features Prince Albert & Princess Charlene's joint monogram. While the photos don't show it the envelope and card both have little sparkles embedded in the paper. 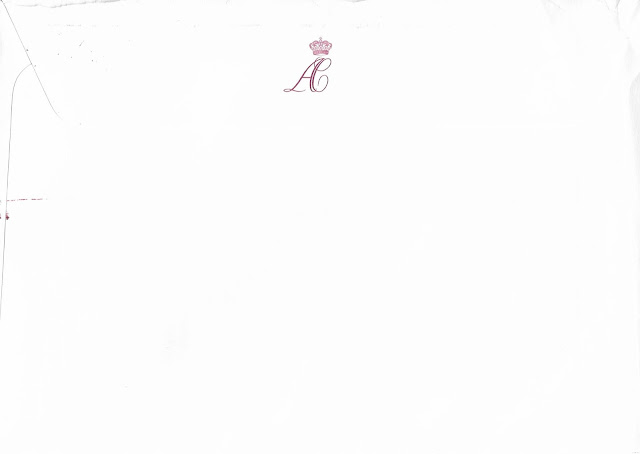 The front of the card features a lovely photo of Prince Albert, Princess Charlene, and their two children, Crown Prince Jacques and Princess Gabriella. The photo was taken by Eric Mathon, in early December, before Charlene's haircut. Eric is the Palace's photographer. The photo has been printed on photo paper that is then attached to the card, making this very nice quality.
The card is similar to past years. And features the couple's Joint Monogram embossed in red, along with a red embossed border. 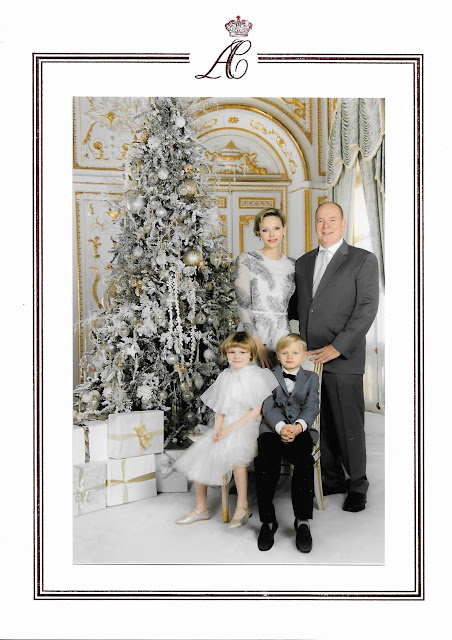 Unlike the last 3 years, there is no 2nd photo on the inside. I didn't really like the way they had been doing that, so I was glad to see it go.
The message on the inside of the card is written in French, English, and Monégasque. The message is similar to the past, although the wording changes each year. The signatures are printed on and the same ones used each year. 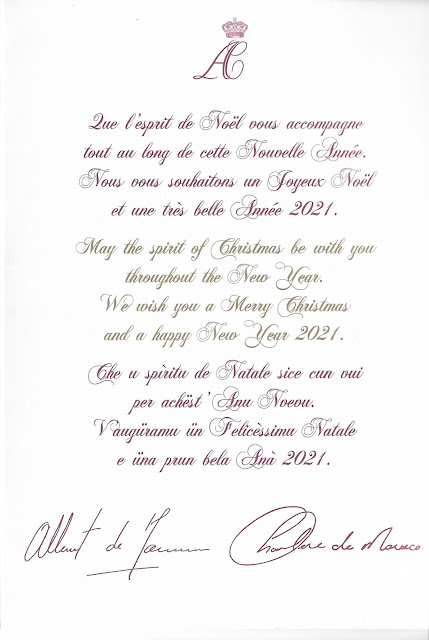 May the spirit of Christmas be with you throughout the New Year. We wish you a Merry Christmas and a Happy New Year 2021. 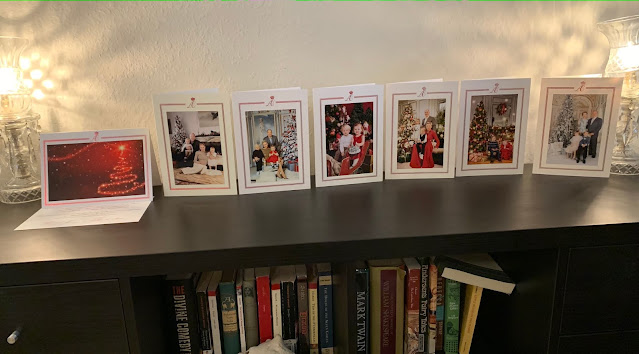 A lovely reply arrived today from Belgium. I have written to Princess Elisabeth in October to wish her a happy birthday.
The front of the envelope is the usual from the Belgium Royals with "Palace of Brussels" written on the front in french. 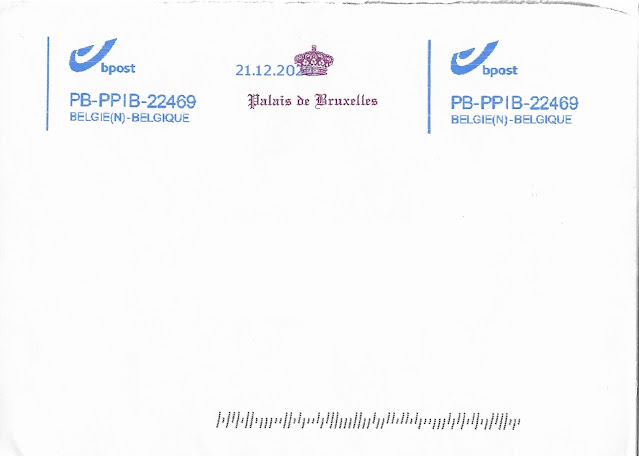 Inside is the usual flat card and photo. The flat card is same as past birthday replies. The message is in french. 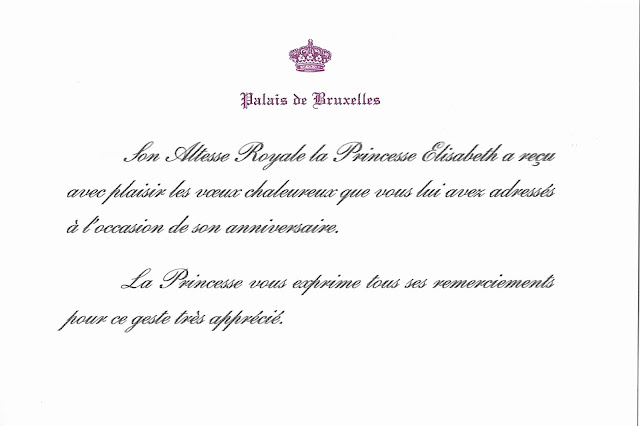 Her Royal Highness Princess Elisabeth received with pleasure the warm wishes you sent her on the occasion of her birthday.

The Princess expresses her thanks to you for this much appreciated gesture.

Ever since Elisabeth turned 18, her birthday reply has been sent on her behalf, not her parents.

Accompanying the flat card was a photo of Elisabeth. I heard the photographer had asked others not to post the photo online, due to copyright issues. So, I am not sharing it. The photo was taken by Benoît Doppagne and is a headshot from Elisabeth's 18th birthday celebration a year ago.

A lovely reply arrived today from Monaco. This is my first reply of 2021 and my first Christmas 2020 reply.

The envelope features a special holiday postmark "Meilleurs Voeux," which is French for Best Wishes/Happy New Years. This postmark was stamped on all the mail in Monaco from December 21st, 2020 to January 9th, 2021.

The stamps are to mark the 75th anniversary of the United Nations and were released in October 2020.

What is interesting that this was sent to my old address, and then forwarded. We have known for years that the Monaco Royals have a database in which they store information on people who write or attend events at the Palace. So, they simply pulled my address from the database instead of the envelope. 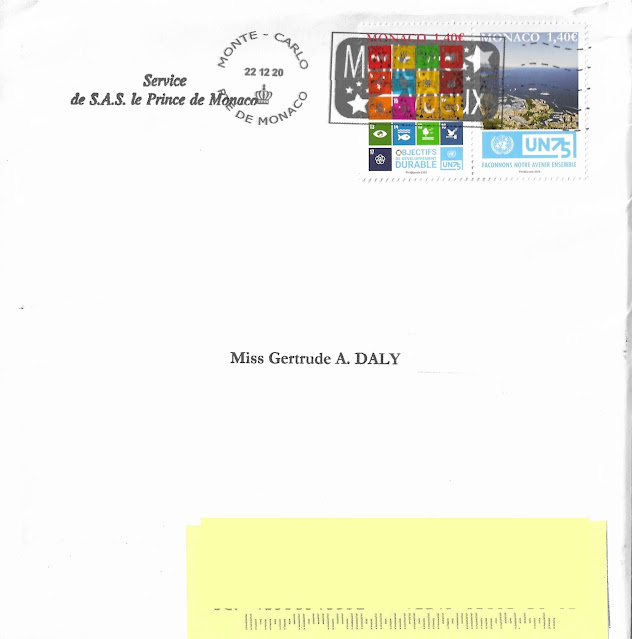 Inside is a card from Princess Stephanie. This is the 2nd reply I have gotten from her, although I've written to her a few times over the years. My first reply from her was for Christmas last year. This year's card is the same as last year's except it has a different design.
The front of the card features some flowers, berries, and the phrase "Meilleurs Voeux," which means "Best Wishes/ Happy New Years" in French. French is Monaco's official language. 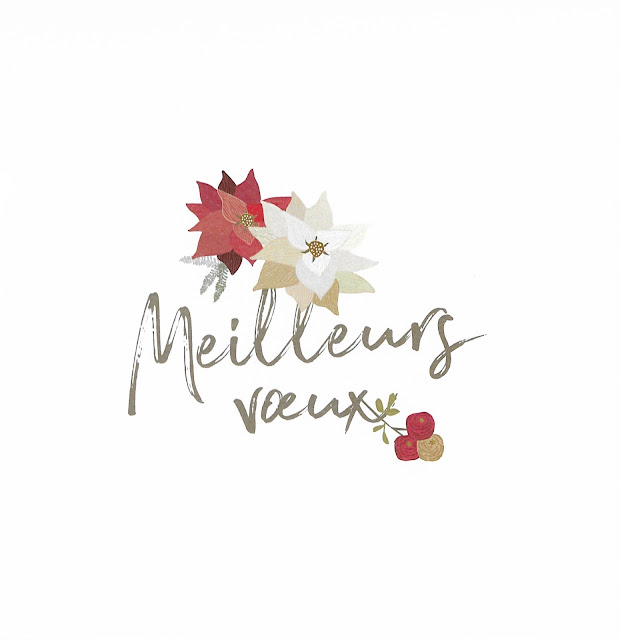 Inside the card is the message "Best Wishes for a Happy New Year" written in English and French. The signature is printed on and is the same one used last year. 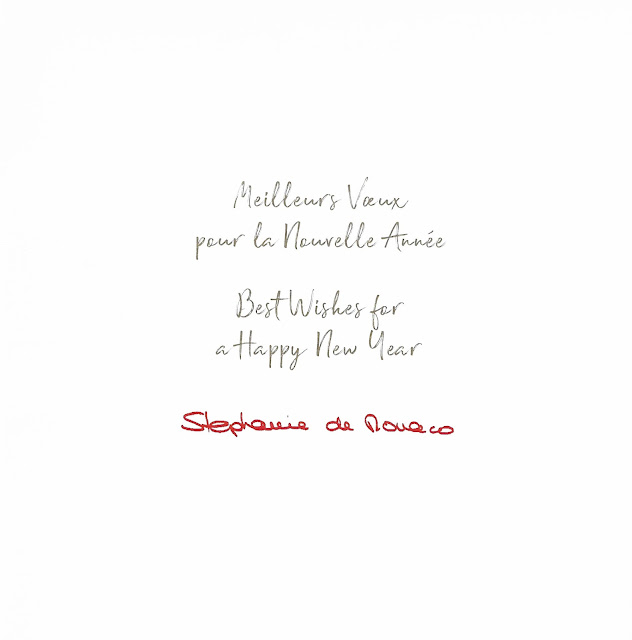