Another piece of Royal Mail arrived earlier this week! This time from the UK.

The envelope is standard for the UK Royals. What is interesting is this envelope has two postmarks.

The red postmark is the iconic one from the Court Post Office at Buckingham Palace. This is where all of the London Royal office's have their mail franked (i.e. stamped with postage and postmark).

The black postmark was added when the mail was taken to the Mount Pleasant Post Office in London. The postmarks reads: "Royal Mail proudly supports 30 years of Payroll Giving." This was a special week only (July 10-15th) postmark to celebrate the 30th anniversary.

"Payroll Giving allows employees to give to charity straight from their wages or pension without paying tax on it. [...] Over the years, Royal Mail employees have raised over £58 million supporting over 1,400 charities." - Royal Mail in press releases on the 30th Anniversary Postmark

Inside the envelope is a reply to the letter I sent to Prince William for his birthday. I received both the typical postcard size photo and a letter.

The letter is written by Claudia Spens, who is head of the correspondence section at Clarence House. The stationary says Kensington Palace, which is the name of William, Kate & Harry's office. But their mail from the public is handled by Clarence House.

The letter is dated June 29th, but the envelope is postmarked July 11th, two weeks later. So, this was either mistaken dated, or it accidentally sat around for 2 weeks, which happens. Prince Andrew's office is particularly prone to letting stuff sit around for a few days before being sent out. 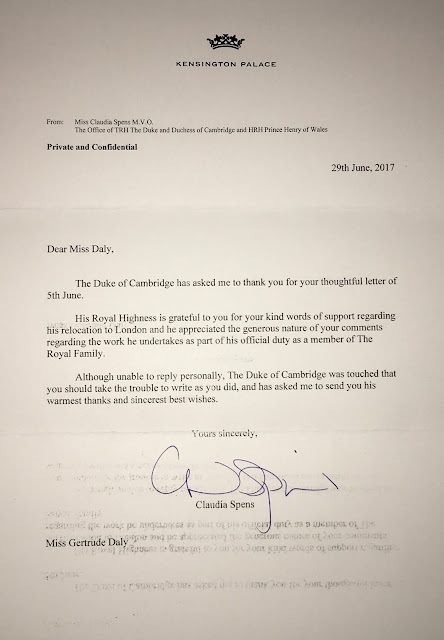 The Duke of Cambridge has asked me to thank you for your thoughtful letter of 5th June.

His Royal Highness is grateful to you for your kinds words of support regarding his relocation to London and he appreciated the generous nature of your comments regarding the work he undertakes as part of his official duty as a member of The Royal Family.

Although unable to reply personally, The Duke of Cambridge was touched that you should take the trouble to write as you did, and has asked me to send you his wamest thanks and sincerest best wishes.

I always find it very touching to get a personal letter in reply. It's clear Miss Spens had read my letter.

This also mark's the 1st anniversary of the Black Kensington Palace Stationary. I first saw it with  William's birthday reply last year. I'm not a huge fan, but it is likely much easier on Clarence House to have one stationary for William, Kate and Harry, then 3 personal ones. I have even seen letters from the Private Secretaries at Kensington Palace use this black stationery.

This reply came a little later than last years, but 3 months earlier than 2015's. So a good response time.

The photo card is the normal size, but it what is interesting is it has a white border around the picture. We've seen this before with Camilla's large photo cards, and more recently on the normal size Christmas reply from Charles & Camilla. I understand why on the large cards you want a bit of a border, and it works well. But on such a small picture as this, I don't see why it is needed. 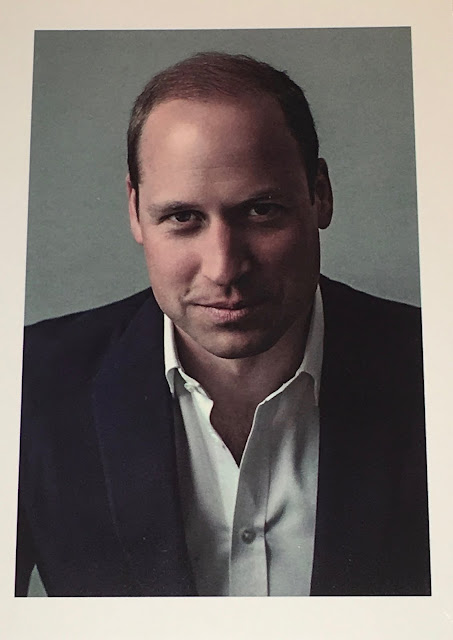 The photo was taken in April by Norman Jean Roy for British GQ. You can read Prince William's British GQ interview here.

The back of the card has the same sort of message as usual. But it is nice to see new wording. I particularly like it when the card mentions which birthday. Because it doesn't have a date on it, it could be hard a few years from now to just look at the picture and tell which birthday this was from. 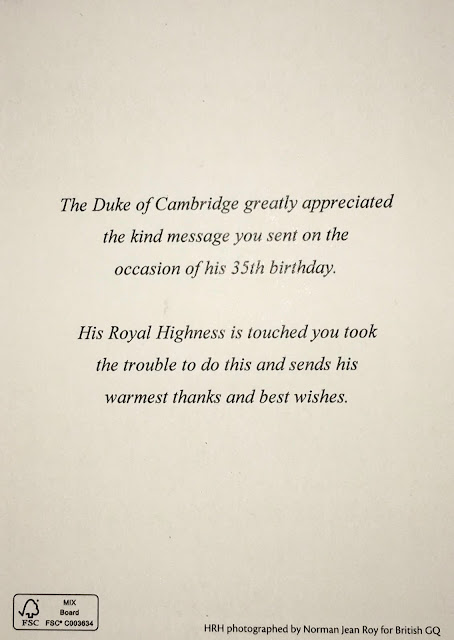 The Duke of Cambridge greatly appreciated the kind message you sent on the occasion of his 35th birthday.


His Royal Highness is touched you took the trouble to do this and sends his warmest thanks and best wishes.