I received this reply last month from the UK. I hadn't posted it earlier as I just moved and things have been chaotic. (I do have a number of Christmas Replies to post, including one I just got today!).

I had written to Prince Philip in February to wish him a speedy recovery as he had been hospitalized. This is the last reply I received from him.

It is funny to look back at what I wrote 2 months ago. We had been told at the time I wrote my letter that his hospitalization was just a precaution and that Philip would only be there "for a few days of observation and rest." I did not expect this would be the last letter I ever wrote to him. I have included the text of my letter below.

I was very sorry to hear that you have been hospitalized. But I was glad to hear that it is just a precautionary measure and that you are in good spirits. I hope that you are doing well and that things are not too serious. You are in my continued thoughts and prayers.

I also wanted to extend my deepest congratulation on the birth of your newest great-grandchild. I thought it was wonderful that Princess Eugenie and Jack Brooksbank choose to honor you, by giving their son the middle name Phillip. It was very touching.

While this hospitalization is not the best way to start 2021, I am sure you will have a good year with 2 more great-grandchildren on the way and yours and Her Majesty’s milestone birthday celebrations."

The envelope is the usual from the British Royals and features the postmark from the Court Post Office at Buckingham Palace. The yellow sticker at the bottom is because the letter had to get forwarded to my new address. 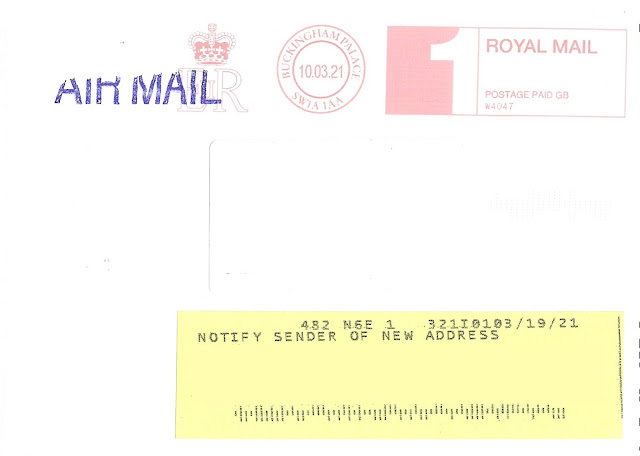 The back of the envelope feature's Prince Philip's badge. The center of the badge is Edinburgh Castle, chosen as a nod to Prince Philip's title, The Duke of Edinburgh. The belt surrounding that is the Order of Garter Belt, with the Orders' motto, Honi soit qui mal y pense (Middle French for Shame on him who thinks evil of it). The badge is topped with the Coronet of the Child of the Sovereign. (Philip started using this coronet when he married Elizabeth and was the son-in-law of the Sovereign. As there is no special coronet for the spouse of a Queen, he kept this. ) All of these elements are also features on Prince Philip's Coat of Arms. 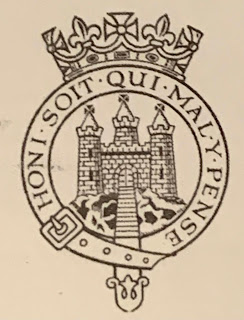 (The difference in paper color is just because the close-up was taken by my phone, and the wider envelope is a scanner with my printer. ) 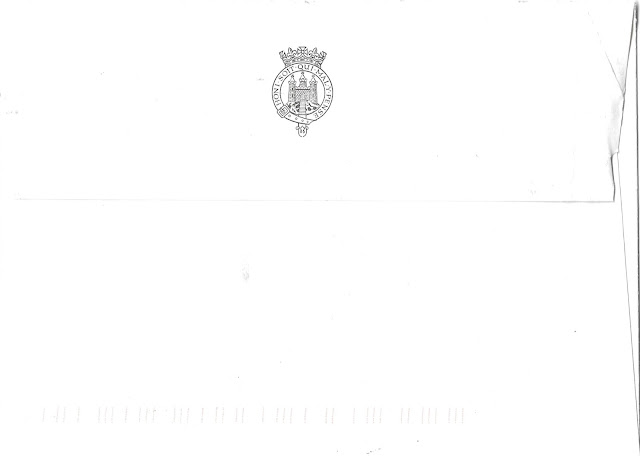 Inside is a letter from Suzy Lethbridge, who has been handing pretty much all of Prince Philip's mail since his retirement. The message is pretty similar to the 2018 reply I received following Prince Philip's surgery and hospital stay. The letter featured at the top is again Prince Philip's badge. 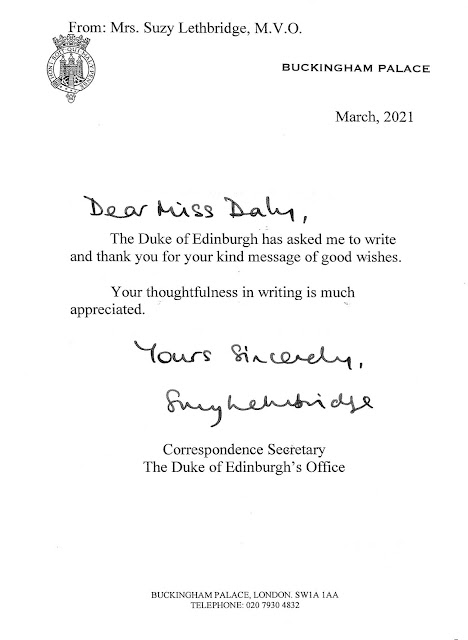 The Duke of Edinburgh has asked me to write and thank you for your kind message of good wishes.

Your thoughtfulness in writing is much appreciated.

A lovely reply arrived today from the UK. I had written to Princess Eugenie and Jack Brooksbank for the birth of their son August Brooksbank.

The envelope features the usual postmark from the Court Post office at Buckingham Palace. From the postmark, we can see this was mailed out weeks before Prince Philip's death (in case you were wondering). 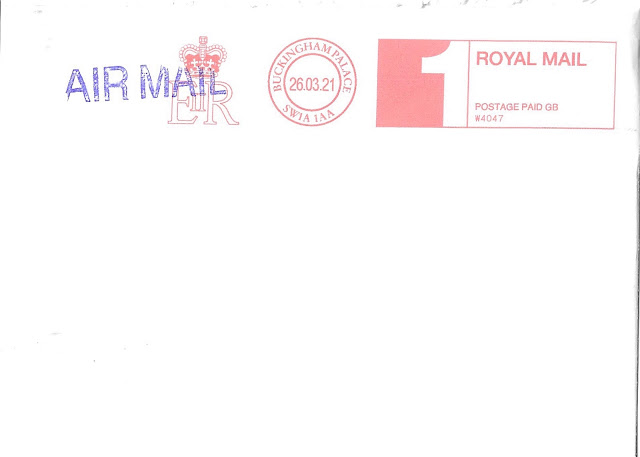 Inside is a photo card. The front features a photo of the family. The photo was part of the set released to mark August's birth. The photo was taken by Princess Eugenie's midwife. 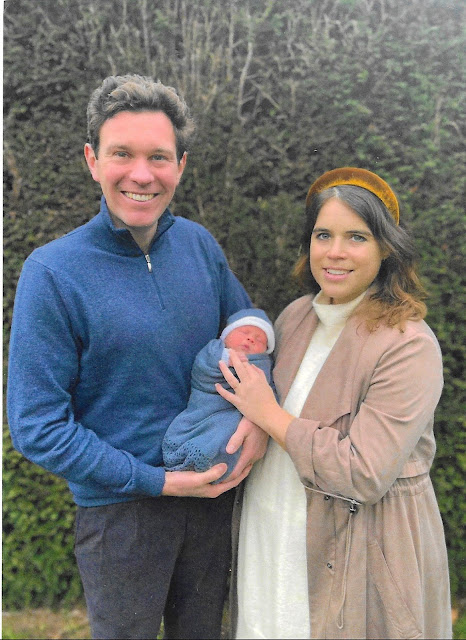 The back of the card features a message from the couple. Even though it is merely a copy printed onto the card, the fact that the message is handwritten makes it feel very personal and extra special. Above the message is Eugenie and Jack's joint monogram. As Jack is not a Royal, the monogram does not feature a crown/coronet. 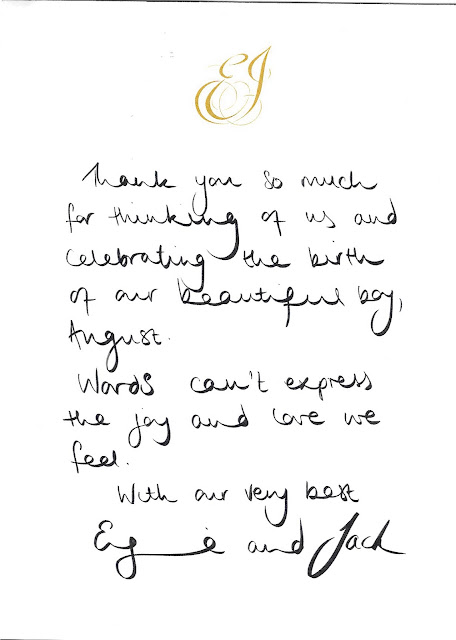 Thank you so much for thinking of us and celebrating the birth of our beautiful boy, August.
Words can't express the joy and love we feel.

With our very best,
Eugenie and Jack.

I won't repeat the basics of writing to the Royals, as it is pretty much the same for all letters. You can find a lot of helpful info on that here. (And just a reminder, if you are sending a letter internationally, you need an international stamp! [Or the equivalent postage.])
Who to write to:
You can write to the Queen and if you would like, mention that you are sending your condolences to her and her family.
Alternatively, you can send multiple letters or cards to the different members of Prince Philip's family. Obviously, I wouldn't write to every royal individually, but you can send a letter to a couple or family.
I will probably write to the Queen & Philip's four children. And for each, mention I am sending my condolences to them and their family.
Address:
The address for The Queen is:
Buckingham Palace
London SW1A 1AA
UNITED KINGDOM
You can find a list of all the addresses for the British Royals here.
How to style the royal on the envelope and Dear _, Line:
When writing to the Royals there are a lot of different ways you can address them depending on how formal or informal you wish to be and the tone of your letter/card.
We have a blog post that breaks down some ways to address people based on their title. You can find it here. (The 2nd table shows how to address couples.)
When to write:
Don't feel like you need to write this minute. Give yourself a few days to reflect, see what information is being released by the Palace, family, media, etc.
I think anytime within 2 weeks after the passing/funeral is acceptable.
What to say:
Letters of condolences are best-kept brief, anywhere from a few lines to a page.
Things you might include in your letter:
Donations:
Should you wish to make a charitable donation in memory of Prince Philip you can. The Palace has not named any specific charities for people to donate to. But have instead encouraged people to give to a charity of their choosing or one of the charities or organizations which Prince Philip supported in his public duties.
Handwrite vs. Typed:
There is an old, outdated rule that letters of condolences must be handwritten. This comes from a time when people learned beautiful penmanship and typewriters were a new invention. If you have nice handwriting, I would strongly encourage you to handwrite your note. It makes it more beautiful and personal.
But if you don't have nice handwriting, and a typed letter is actually going to look nicer and be easier to read, then feel free to type it.
I've sent both handwritten and typed letters of condolence in the past. I usually handwrite the note if it is only a few lines. And will type the note if it's longer.
Back to "How To" - Main Page
Posted by Gert's Royals at 7:28 PM