A lovely reply arrived yesterday from Monaco. I had written to Princess Stéphanie a number of times over the years, including Christmas last year. This is the first time I've gotten a reply, which makes this extra special.

The front of the envelope looks pretty much like the others from the Monaco Royals. One thing that is interesting, is instead of left justifying my address, it is centered. And there are some other little things that make this different than Prince Albert & Princess Charlene's envelopes. Each office handles their own mail. So, sometimes, the formatting of the address is one way you can tell which office the reply comes from.

The stamp is of Prince Charles III of Monaco. And was released from 2018 to mark the 200th anniversary of his birth. 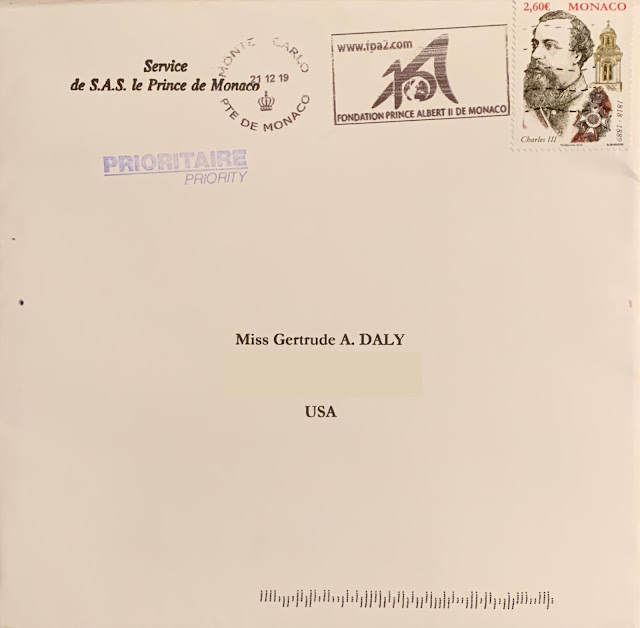 Inside is a lovely card. The front of the card features a wreath with a red bow, with the words "Best Wishes" written underneath in French. 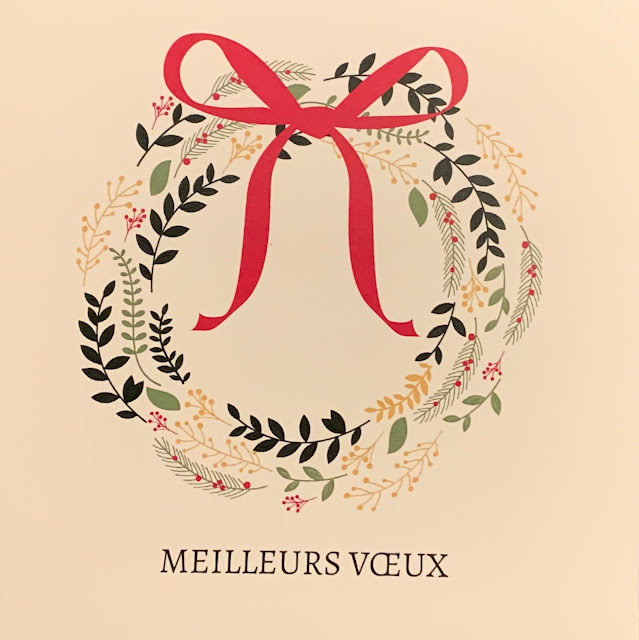 Inside the card is a typed message and Stephanie's signature printed on. 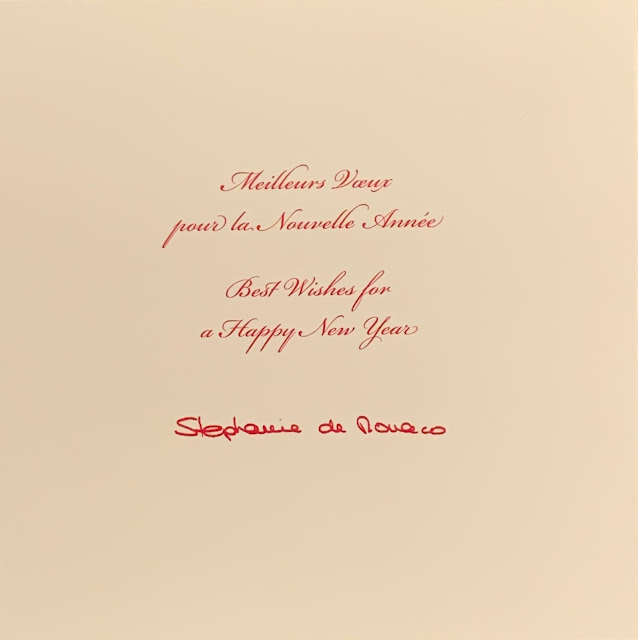 The message is in French and English, and reads:

A lovely reply arrived while I was out of town for the Holidays. I had written to Prince Guillaume & Princess Stéphanie of Luxembourg to wish them a Merry Christmas. 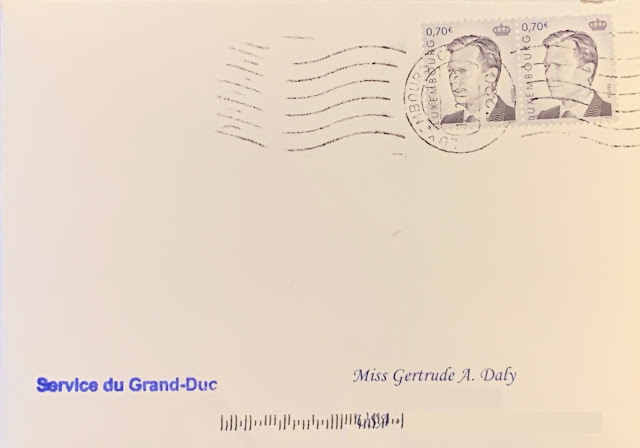 The back of the envelope features a Luxembourg blue crown. 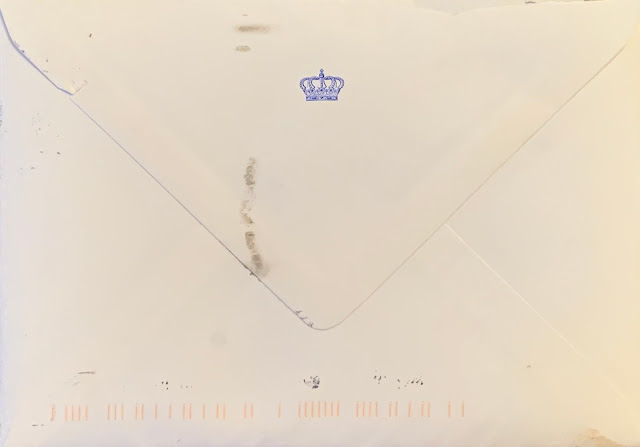 Inside is a handmade Christmas card made by the Foundations Autisme Luxembourg, which Grand Duchess Maria Teresa is patron of. The card is from a set sold by the charity. The front features a lovely star design along with the message "Happy Holidays" in German, one of Luxembourg's official languages.
The card is made of heavy cardstock and the design on the front is layered, so the card has a nice weight and texture. 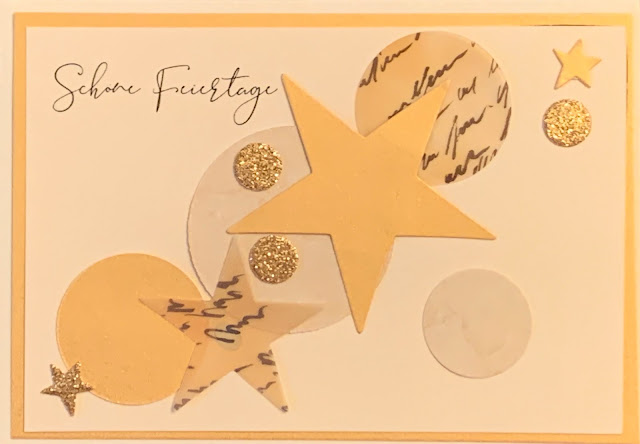 The inside of the card is blank. The charity did this to allow people to write in their own message. Guillaume & Stéphanie instead included an insert. This allows them to send out replies in multiple languages.

The insert is the typical flat card from the Luxembourg Royals.
The card says:

The back of the card is blank, except for a stick from the charity. 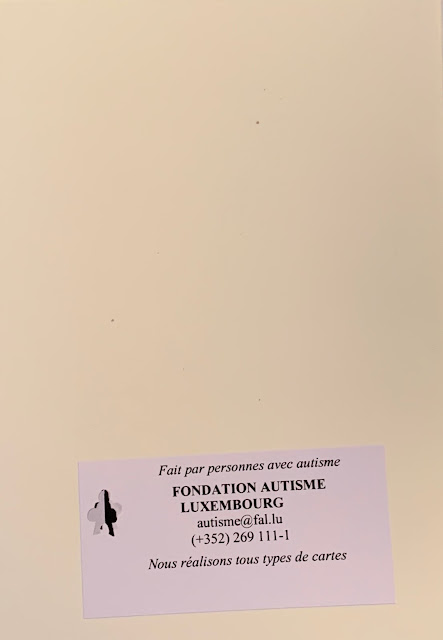 We carry all types of cards

Sending your Condolences for the Passing of Ari Behn

Who to write to:
Even though they are divorced I think it would be very appropriate to send a letter of condolence to Princess Märtha Louise and/or her daughters.

I could either address your letter/card to:

The Norway royals don't regularly reply. So, I really have no idea if they would reply or what it would look like.

Note: When referred to in English, Princess Märtha Louise is an HH (Her Highness), not an HRH (Her Royal Highness).

Don't feel like you need to write the minute you hear the news. Give yourself a few days to reflect, see what information is being released by the Palace, family, media, etc.

I think anytime within 2 weeks after the passing or shortly after the funeral is acceptable.

A lovely reply arrived this week from Luxembourg. I had written to Prince Guillaume last month to wish him a happy birthday. 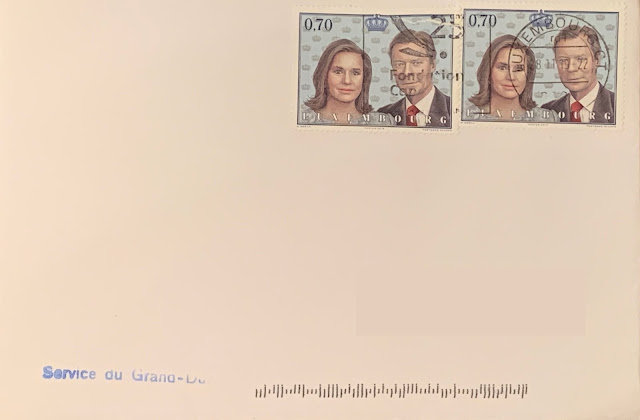 The back of the envelope features a blue crown. 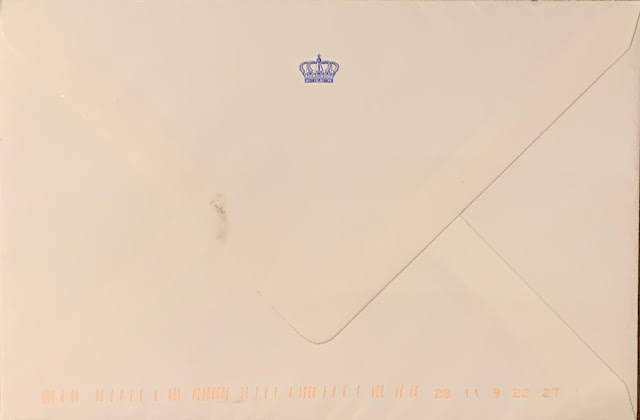 Inside is a flat card with a typed message. This is fairly typical of the Luxembourg royals. 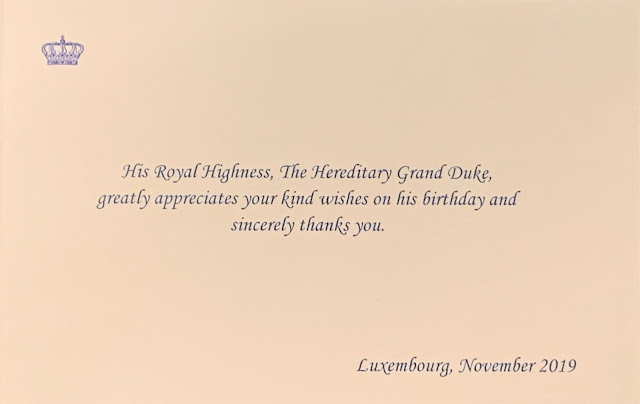 
His Royal Highness, The Hereditary Grand Duke, greatly appreciates your kind wishes on his birthday and sincerely thanks you.

Back to Replies - Main Page
Posted by Gert's Royals at 6:00 PM

A lovely reply arrived today from Belgium. I had written to Prince Amedeo and Princess Elisabetta in September to congratulate them on the birth of their 2nd child, Archduke Maximilian.

The Purple Crown/ Palais de Bruxelles envelope is one of the most common used by the Belgium Royals. The Royal Palace of Brussels is where King Philippe, Queen Mathilde and many of the Belgium Royals have their office.

This reply is not actually from Amedeo & Elisabetta, but Amedeo's mother, Princess Astrid. This is understandable, as she is a working royal and has her own staff, and they don't.

One thing I love about the envelope is my address has been typed in a pretty cursive font. We see this occasionally from the Belgium Royals. 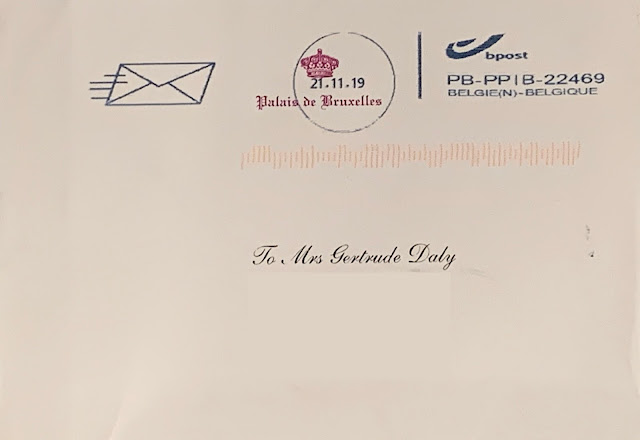 Inside the envelope is a flat card & photo. The flat card is fairly typical of the Belgium Royals. The signature is printed on. 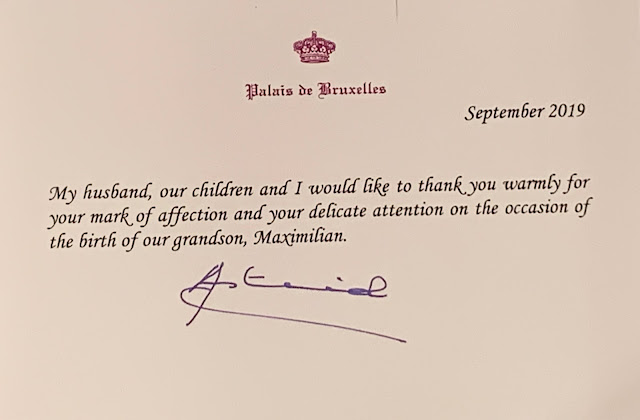 My husband, our children and I would like to thank you warmly for your mark of affection and your delicate attention on the occasion of the birth of our grandson, Maximilian.

The photo is of little Archduke Maximilian with his name and birthday printed on. 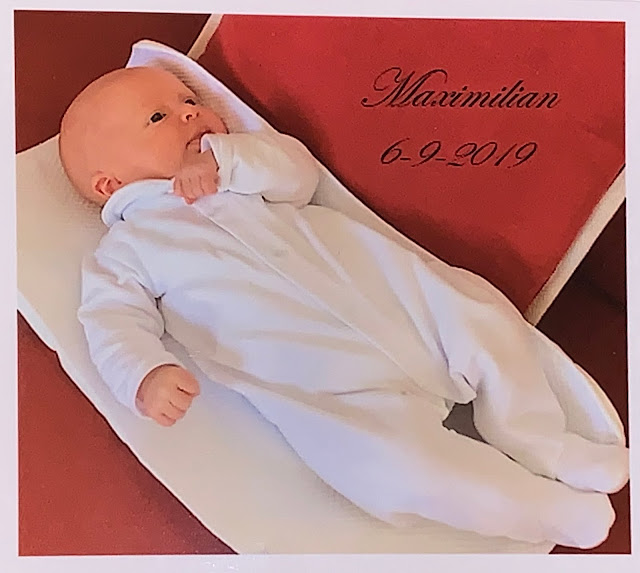 On the back of the photo says "Maximilian small text black final" in dutch along with some jibberish letters and numbers. 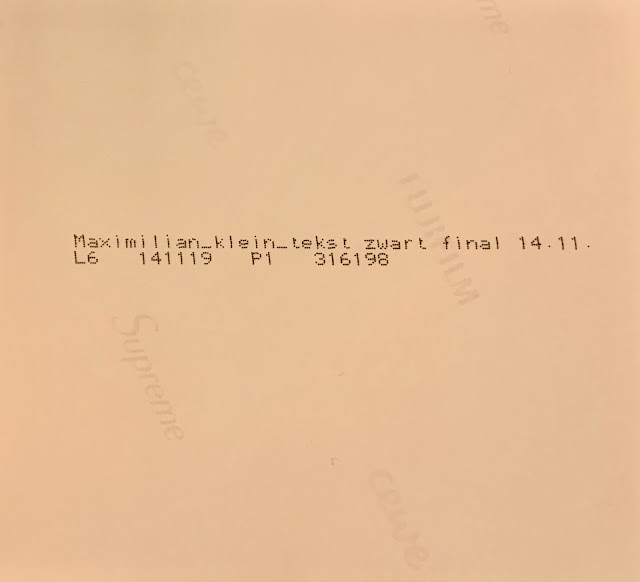 Back to Replies - Main Page
Posted by Gert's Royals at 5:50 PM 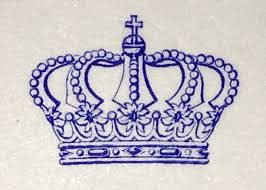 The Basics:
We have a lot of helpful general information on writing to the Royals under our "How to" tab. This post will just cover some specifics about writing for today's announcement.

There are a lot of ways you can refer to the couple, including:


What you use is a matter of personal preference and how formal you want to be.

When to write?
You don't need to worry about getting your letter/card out the same day as the announcement. I think a good rule is to try to send out your congratulations within 2 weeks of the announcement.


Will they reply?
Yes, I would expect so. The Luxembourg Royals usually reply with a flat card printed for the occasion. I expect it will be similar to Prince Felix and Princess Claire's pregnancy or birth reply for Prince Liam.

And I would expect a longer response time than usual given that the Palace will have to deal with Pregnancy and Christmas mail all at once, and both are big occasions to write to the royals.
Posted by Gert's Royals at 2:35 AM

Spain
Sweden
UK
Replies I Have Sent Out

Spain
Sweden
Back to Christmas - Main Page
Posted by Gert's Royals at 3:43 AM

A lovely reply arrived this week from Belgium. I had written to Princess Elisabeth for her 18th Birthday in October.

The Belgium Royals have quite a few different envelopes that they use. But, this is one of the most common. The front of the envelope features a purple crown with "Palais de Bruxelles" written underneath. The back is blank. The Palace of Brussels is where state functions are held and the King and Queen have their offices there. 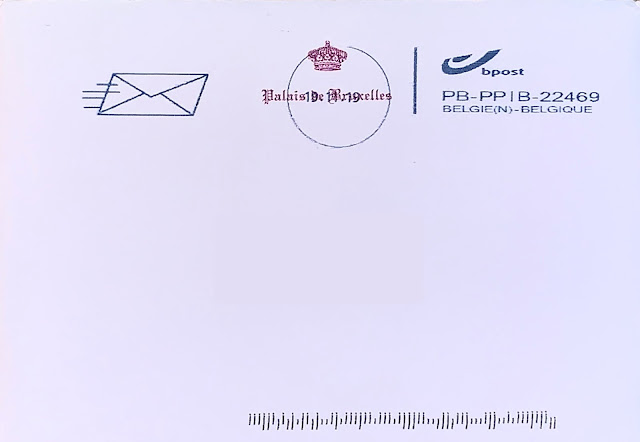 As this is an extra special birthday, this birthday reply is extra special. Inside is a lovely card, that folds out into 4 panels. (The back is blank.) I really like that they formated the card so that you can see everything from one side. It makes it much easier to display the card.

The first panel, which also acts as the cover of the card, features a red border and Princess Elisabeth's monogram. The front of the card is similar to her parent's Christmas card. 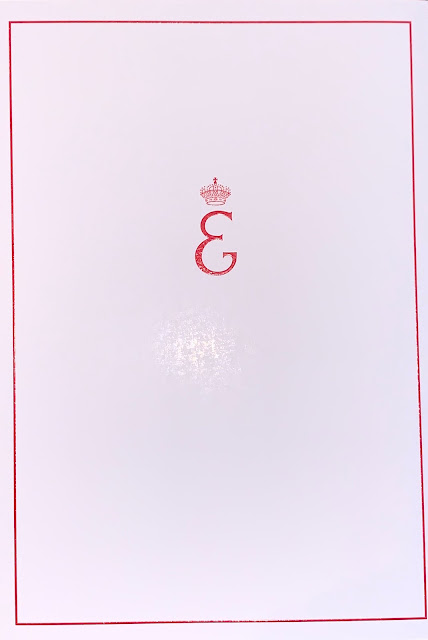 The 2nd panel features a lovely photo of Princess Elisabeth. The photo was taken by her father, King Philippe and is used on a commemorative stamp released for the Princess's 18th birthday. 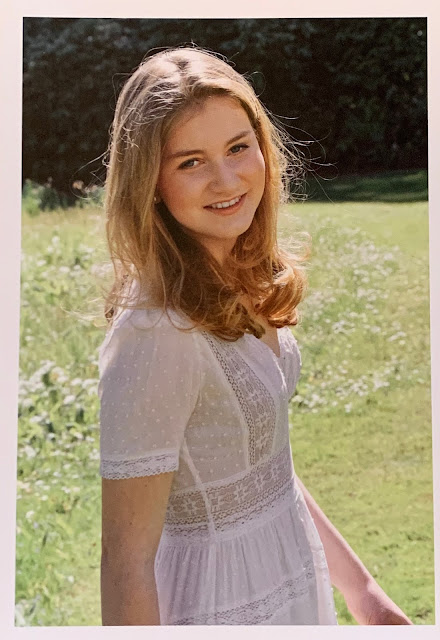 The 3rd panel of the card features a typed message with Elisabeth's signature printed on. The message is in Dutch, French and German, Belgium's 3 official languages. 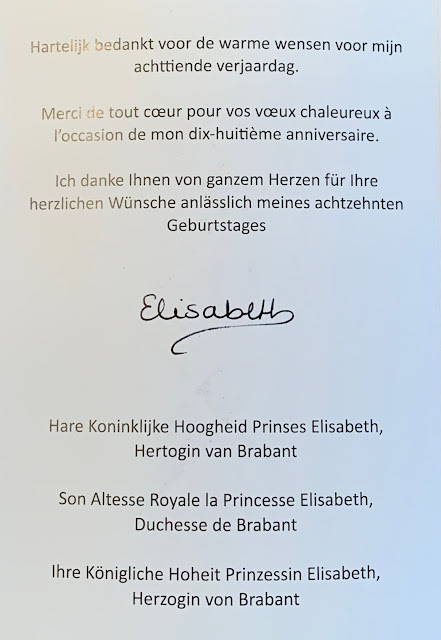 Thank you very much for your warm wishes on the occasion of my eighteenth birthday.


The 4th panel features a lovely photo of Princess Elisabeth that was taken at Château de Laeken, the King and Queen's home, this summer. The photo is from a set released for Elisabeth's 18th birthday. 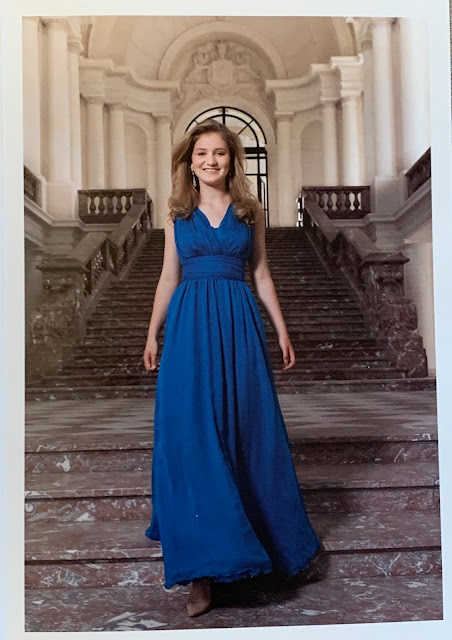 Back to Replies - Main Page
Posted by Gert's Royals at 8:24 AM