Today, I received a reply to the letter I wrote to Duchess Kate for her Birthday in January! The reply was sent a little over a month after her birthday, which is a great response time.

The envelope looked just like the usual. But what was most interesting is it came in an envelope with William's monogram on the back. Kate's mail usually comes in envelopes with her Golden monogram. So, this was either a simple mistake, or they ran out of her envelopes. 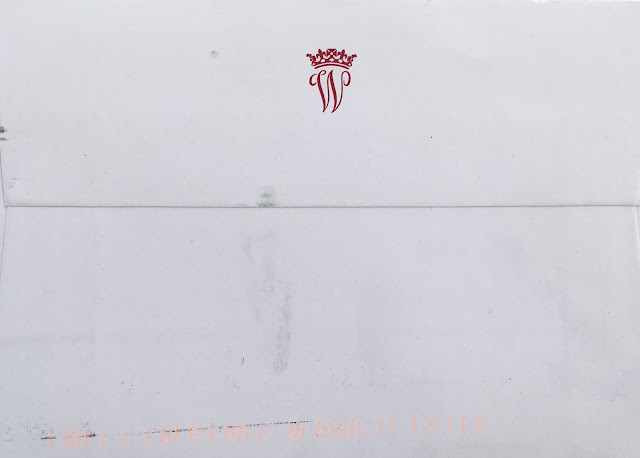 If the card looks at all familiar it's because it is. This is the exact same picture and message used for Kate's reply last year. There is no way to tell them apart. I was comparing the two, and I mixed them up. I was luckily able to figure out which was which, because one of them had gotten slightly dented in the mail, and I could match the dent with the dented envelope, which of course has a postmark on the date and different monograms. 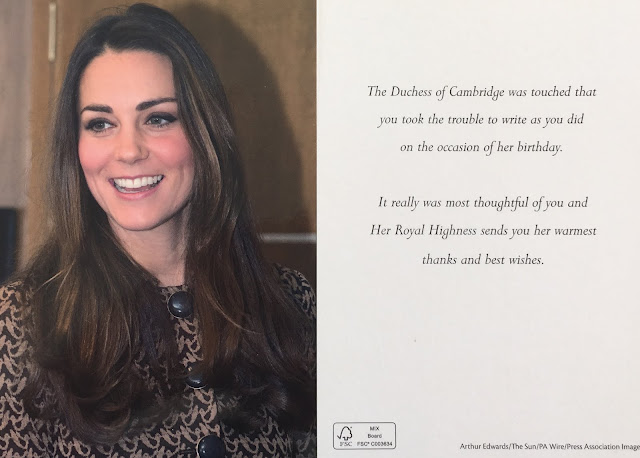 The picture was taken by Arthur Edwards during the Cambridges visit to Only Connect's Head Office on 19th November 2013. Only Connect works with ex-offenders and young people at risk of offending to give them the skill, tools, and opportunities to develop and pursue their life goals in a productive way.

This is quite an old photo (26 months old), even old for last years reply (14 months old). Of all the photos I've gotten from various royals, Kate's birthday replies (and Duchess Sarah's) are the only ones I've gotten that have pictures over 6ish months old. Usually, the photos are fairly recent.

The Duchess of Cambridge was touched that you took the trouble to write as you did on the occasion of her birthday. It really was most thoughtful of you and Her Royal Highness sends you her warmest thanks and best wishes.

Back to Replies - Main Page
Posted by Gert's Royals at 5:53 PM

Replies from Monaco are always one of my favorites!

One of the things you have to appreciate is the fact that they use actual stamps. Prince Albert's father really loved stamps. He oversaw the production of all of Monaco's stamps and opened the Museum of Stamps and Coins. (Monaco's two Princes before Albert's father were also big stamp collectors.)

This stamp features "La nymphe Salmacis," a work by Monaco sculptor François-Joseph Bosio (The nymph Salmacis - from Greek mythology). The stamp was released in April 2015. 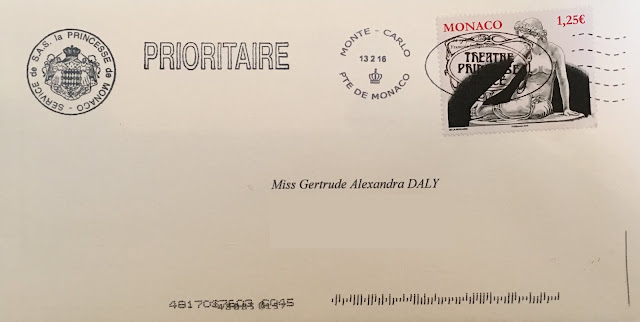 An interesting thing about the envelope is the circle on the left side. All the letter I've gotten from Monaco have said "Service de S.A.S. le Prince/la Princesse de Monaco" (Service of HSH the Prince/ss of Monaco). But it is usually written in two lines. This is the first time I have seen it in a circle with the Monaco coat of arms.

Inside is a typed, thank you card for Princess Charlene's birthday, with a printed signature. The reply is very similar to her card from last year.


I was deeply touched by your kind wishes on the occasion of my birthday, and I would like to thank you most sincerely for this kind gesture. Charlene de Monaco

I was very excited when I saw this in the mailbox today. Not just because it's royal mail, which is always exciting, but because this was the 1st time I had written to the Luxembourg royals. And I really didn't know what to expect in response.

I had written to Grand Duke Jean for his 95th Birthday last month.

The front of the envelope is pretty standard looking. And yes, that is Grand Duke Henri (Jean's son) on the 2nd stamp. 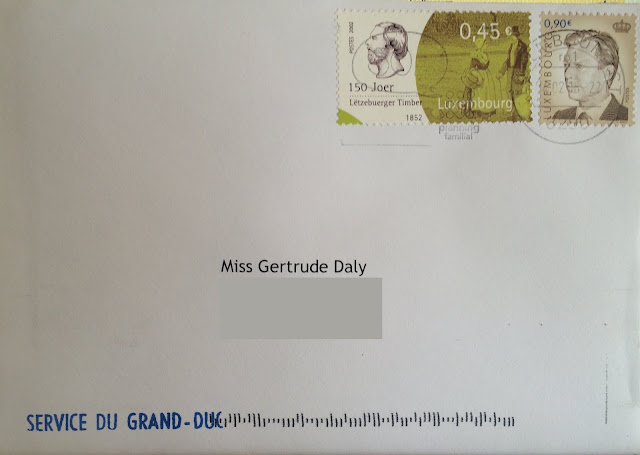 The back of the envelope features a crown and where the letter was from, Chateau de Fischbach (Fischbach Castle), which is the residence of Grand Duke Jean. 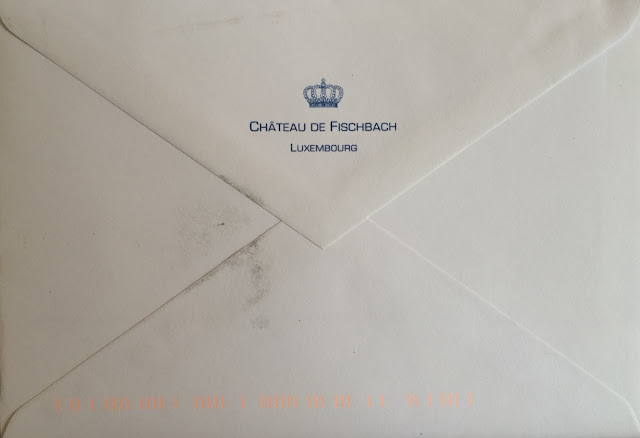 Inside the envelope is a typed thank you card. This is quite similar to the type of responses usually send by the King & Queen of Belgium and the Crown Prince & Crown Princess of Denmark. 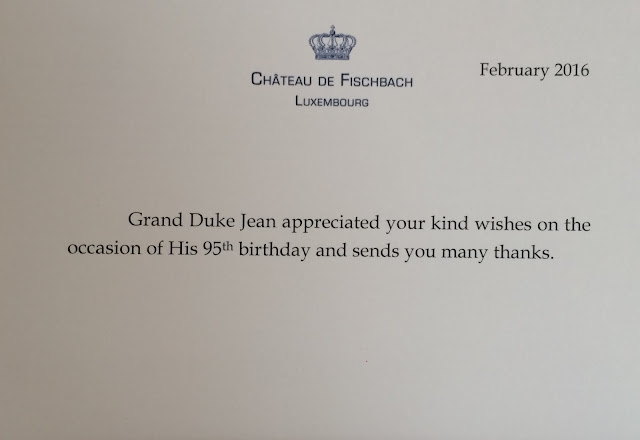 Grand Duke Jean appreciated your kind wishes on the occasion of His 95th birthday and send you many thinks.


This was a pretty good response time. The reply was sent almost exactly a month after the Grand Duke's Birthday.

Back to Replies - Main Page
Posted by Gert's Royals at 1:11 PM

Crown Prince Frederik and Crown Princess Mary of Denmark are simple and predictable when it comes to sending replies. Their Christmas reply this year is exactly like all of the other replies I have received from them. They even reused their message from last year's Christmas reply.

The only real way to tell the difference between this reply and last years Christmas reply is the date on the postmark, and the spacing of the message. 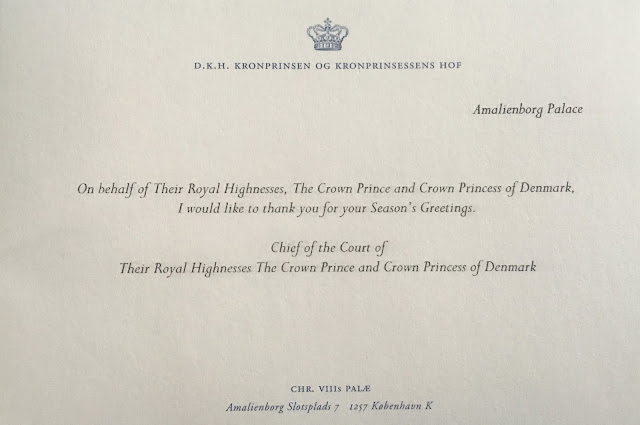 On behalf of Their Royal Highnesses, The Crown Prince and Crown Princess of Denmark,  I would like to thank you for your Season's Greetings.

A lovely thank you letter arrived last week from Sarah, Duchess of York! I had written to Sarah to wish her a very merry Christmas.

The letter is similar to the other one's I have received from her in the past. The letter is written by some assistant. 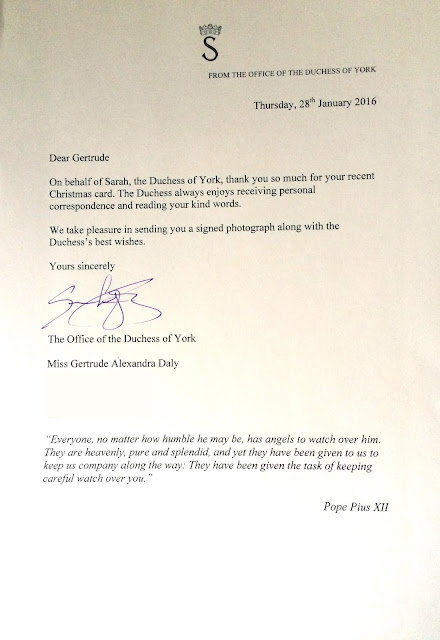 On behalf of Sarah, the Duchess of York, thank you so much for your recent Christmas card. The Duchess always enjoys receiving personal correspondence and reading your kind words.

We take pleasure in sending you a signed photograph along with the Duchess's best wishes.

Your Sincerely (Signature)The Office of the Duchess of York

The quote at the bottom is the same quote Sarah has used on all the letter I've received from her so far. It is from Pope Pius XII from a speech on October 3rd, 1958, six days before the Pope's death.

Included with the letter was a photo, mounted on card stock with a printed signature. The photo is quite old. I tried to find when it was taken but had no luck. 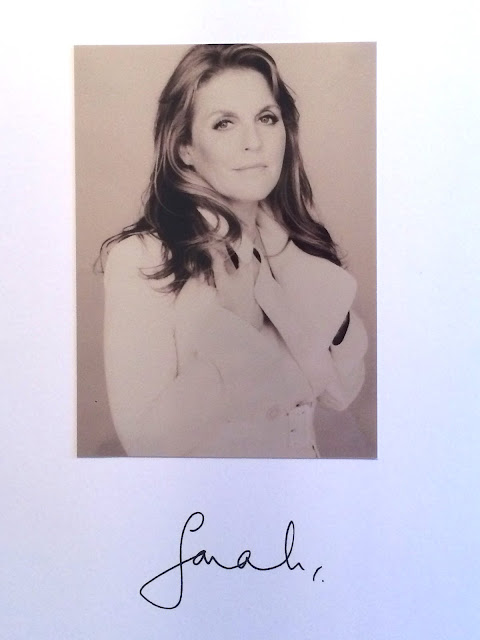 It would have been nice to see a more recent photo since in promoting various products and in interviews, Sarah has said she is the healthiest and more confident than she has been in years.