A lovely reply arrived today from the UK. I had written to Prince Edward & Countess Sophie last month for their 20th wedding anniversary.

This was a wonderful surprise. The Wessexs very rare reply. It seems like their office just picks out a few letters & cards for each occasion to reply to. So, I was not expecting anything. This is my 3rd reply from the couple.

The front of the envelope looks very different than most of the replies you see from the UK Royals. The main reason is the Wessexs's mail isn't processed through the Court Post Office at Buckingham Palace. So, their mail doesn't feature that postmark. (For more on the Court Post Office, and different UK postmarks.)

Unlike other UK Royals, The Wessexs's mail isn't sent to their office in London. Instead, letters to the couple should be addressed to their home, Bagshot Park, where they have staff there to answer them.

This postmark has been used in the past for various royal residences, which is why it is not specific to Bagshot Park.

What is interesting is the postmark still feature's the old royal PPI (Printed Postal Impression) number W7047. The Royals changed the number in March to W4047, which is why they redesigned a number of their postmarks, including the one for the Court Post Office at Buckingham Palace. I expect they will update this postmark eventually. But, it's understandable that they would be a few months behind. 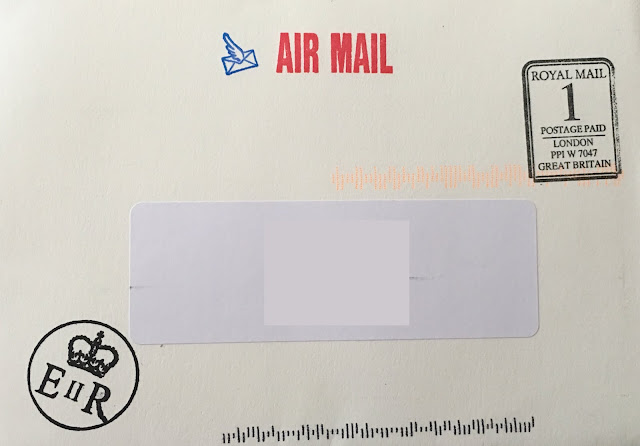 The back of the envelope features Prince Edward & Countess Sophie's joint coat of arm, along with the name of their residence, Bagshot Park. This envelope is used for both joint things from the couple, and solo letter sent on behalf of one of them. 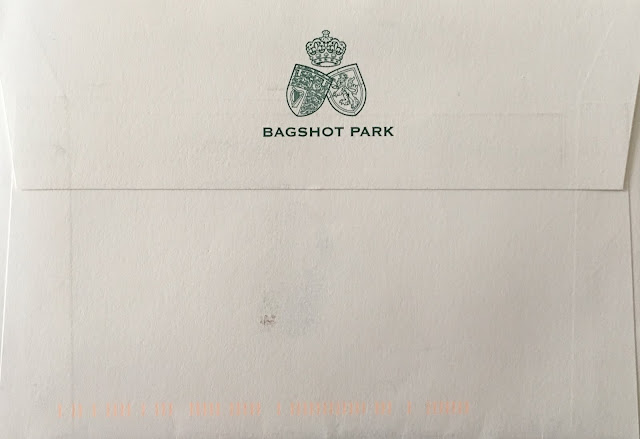 In the envelope is a simple letter written by Jackie Phipps, their Secretarial Assistant. 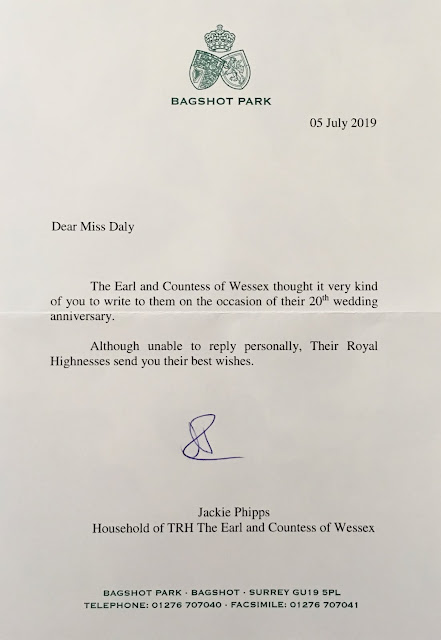 The Earl and Countess of Wessex thought it very kind of you to write to them on the occasion of their 20th wedding anniversary.

Although unable to reply personally, Their Royal Highnesses send you their best wishes,

Jackie Phipps
Household of TRH the Earl and Countess of Wessex


The bottom of the letter features the address for Bagshot Park, which is what you want to use if you write to them. There is also a telephone and fax number.
Posted by Gert's Royals at 2:07 PM

Here are my replies for Prince Edward & Countess Sophie, AKA the Earl & Countess of Wessex.

Their office very rarely replies to letters. So, while I've written to them a number of times over the years, I've only gotten a few replies.

A lovely reply arrived today from the UK. I had written to Prince William & Duchess Kate for Princess Charlotte's birthday.

The envelope is usual from the British Royals.

The back of the envelope features the black crown/Kensington Palace that is used by the Cambridges.

Inside is a letter and a postcard-sized photocard.

The photocard features a lovely photo of Princess Charlotte taken by Duchess Kate. This is from the
set of official photos that were released for Charlotte's birthday. 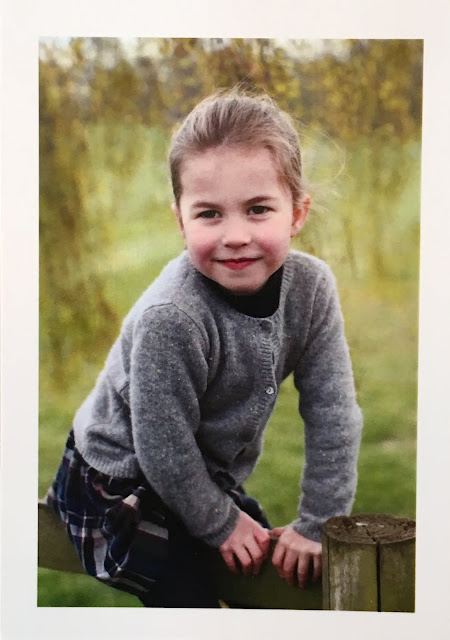 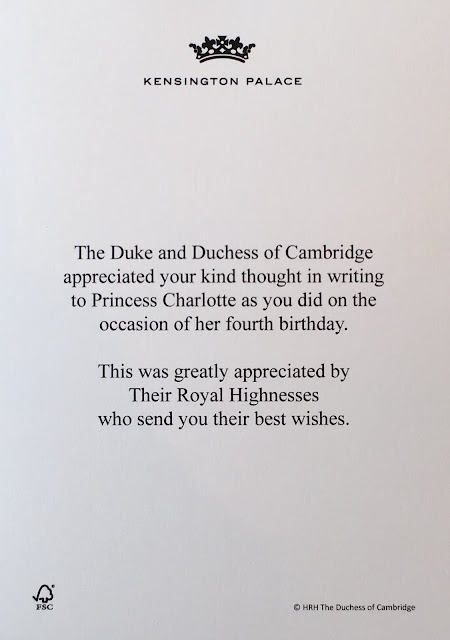 The Duke and Duchess of Cambridge appreciated your kind thought in writing to Princess Charlotte as you did on the occasion of her fourth birthday.

Included with the card is a letter from Claudia Spens, head of the correspondence section at Clarence House. In my birthday letter to Princess Charlotte, I had also sent my congratulations to Duchess Kate on being appointed Dame Grand Cross of the Royal Victorian Order by the Queen. I had sent my anniversary wishes to the Cambridges in my birthday letter for Prince Louis, and received a letter in reply. But as I had written & sent that letter before their anniversary, when this honor was announced, I wasn't able to include my congratulations to Kate for her Royal Victorian Order. 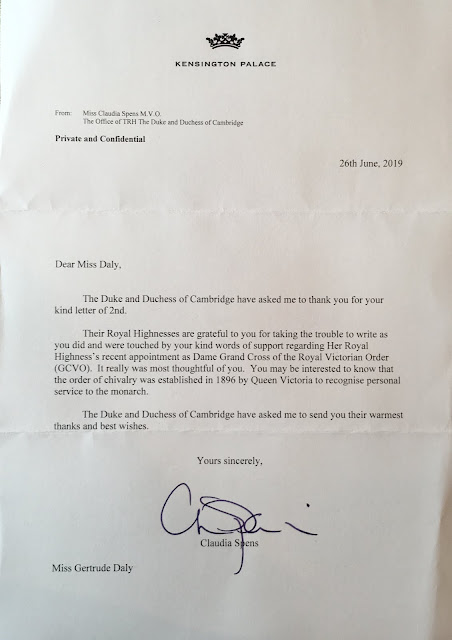 The Duke and Duchess of Cambridge have asked me to thank you for your kind letter of 2nd.

Their Royal Highnesses are grateful to you for taking the trouble to write as you did and were touched by your kind words of support regarding Her Royal Highness's recent appointment as Dame Grand Cross of the Royal Victorian Order (GCVO). It really was most thoughtful of you. You may be interested to know that the order of chivalry was established in 1896 by Queen Victoria to recognise personal service to the monarch.

The Duke and Duchess of Cambridge have asked me to send you their warmest thanks and best wishes.

Clarence House's annual report reveals that they received 123,303 letters/cards from well-wishers from April 2018-March 2019.  (Clarence House answers all of Charles, Camilla, The Cambridges & Sussexs mail.) This is a big increase from previous years:

To deal with the increase in mail, Clarence House has hired more staff for their Correspondence Section. They now have equal to 5.0 full-time staff members.