Today I received a letter from Queen Elizabeth II. I was really excited when I saw her Red monogram embossed on the back of the envelope.  I had written to Queen Elizabeth, last month, to congratulate her on the birth of her newest Great-Granddaughter, Princess Charlotte. I had also written to William & Kate and Charles & Camilla congratulating them on the birth as well.

I think I would have been more enthusiastic about this reply if it had included a sentence about the Queen's feelings about Princess Charlotte's arrival.  In the reply for the Queen's 89th Birthday, Mary Morrison, one of the Queen's Ladies-in-Waiting, wrote to me that "the arrival of Princess Charlotte of Cambridge has given much pleasure to the whole Royal Family." 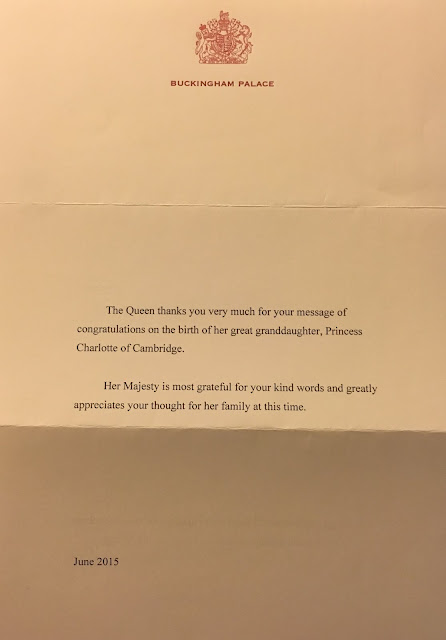 The Queen thanks you very much for your message of congratulations on the birth of her great-granddaughter, Princess Charlotte of Cambridge.

Her Majestty is most grateful for your kind words and greatly appreciated your thought for her family at this time.
June 2015

After the Birth of Princess Charlotte last month I wrote to William and Kate to congratulate them on the birth of their 1st daughter. I also wrote a letter to the Cambridge's Staff congratulating them on what I thought was a job very well done at Lindo Wing. I thought they had learned a lot from Prince George's birth and did an incredible at making Princess Charlotte's birth a lot smoother and easier for everyone involved. It was amazing how even though you could be on the other side of the world, they created a feeling like you were a fan on the streets outside the hospital, although we probably had a better view.

I addressed the letter to Rebecca Deacon, Miguel Head, Jason Knauf, Nick Loughran, Katrina McKeever and the others member of staff who had assisted at Lindo Wing. The envelope I addressed to Rebecca Deacon, the Duchess of Cambridge's Private Secretary, and I sent it to Kensington Palace, where the Cambridges' office is located. Normal correspondence for the Cambridges are dealt with and should be sent to Clarence House.

I wasn't 100% expecting a reply since the letter was addressed and meant for the Cambridge staff, not the couple. I wasn't sure how they would feel about a letter being written to them personally. So I was very excited when I received an envelope in the mail with Catherine's monogram on the back. The envelope and stationary are the exact same as is used when Rebecca Deacon or others mail letters on the Duchess's behalf. When letters are sent on the couple's behalf Prince William's stationery is used. The reply was sent a month after I had mailed the letter and took 4 days to arrive. That is pretty good timing when writing to a British Royal.

The letter was pretty standard of what you see when writing to a British Royal. They usually start with addressing your letter, mention how touched they were and send their best wishes. 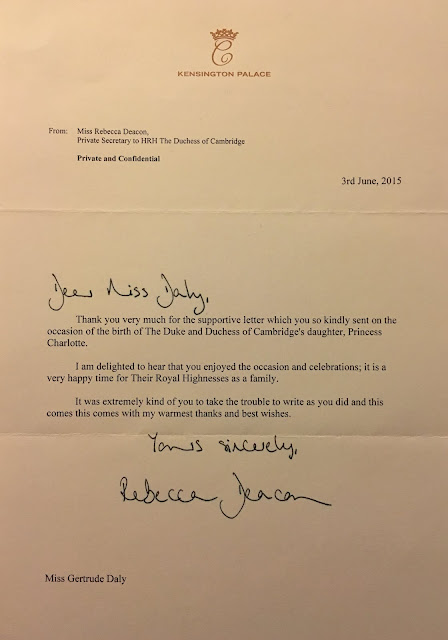 Thank you very much for the supportive letter which you so kindly sent on the occasion of the birth of The Duke and Duchess of Cambridge's daughter, Princess Charlotte.

I am delighted to hear that you enjoyed the occasion and celebrations; it is a very happy time for Their Royal Highnesses as a family.

It was extremely kind of you to take the trouble to write as you did and this comes this comes [sic] with my warmest thanks and best wishes.

Even Rebecca Deacon is prone to a few mistakes, in the last paragraph of the letter Rebecca accidentally repeats "this comes" twice and on the envelope, the word "Private" is misspelled.

Back to Replies - Main Page
Posted by Gert's Royals at 4:05 PM

Yesterday, I was very excited when I got the mail since on the back of one of the envelopes was William's unmistakable "W"! I know exactly what this was. I had written to the Cambridges in May to send my congratulations on the birth of Princess Charlotte. 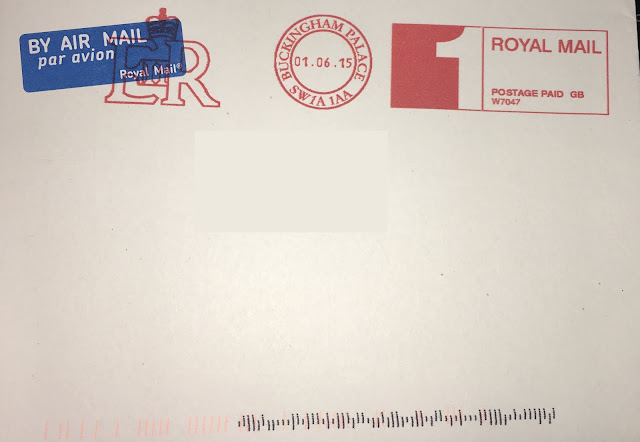 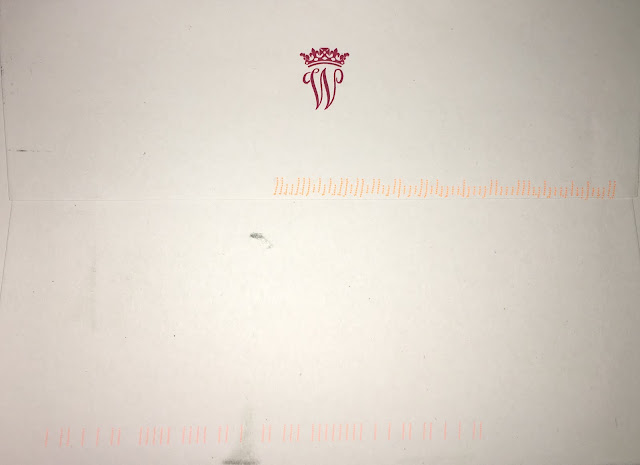 It is your standard reply from the Cambridges, a postcard-sized photo with a typed note on the back. The photo is of the Cambridge's leaving Lindo Wing with Charlotte on the day of her birth. It was taken by James Whatling; who is an independent photographer. 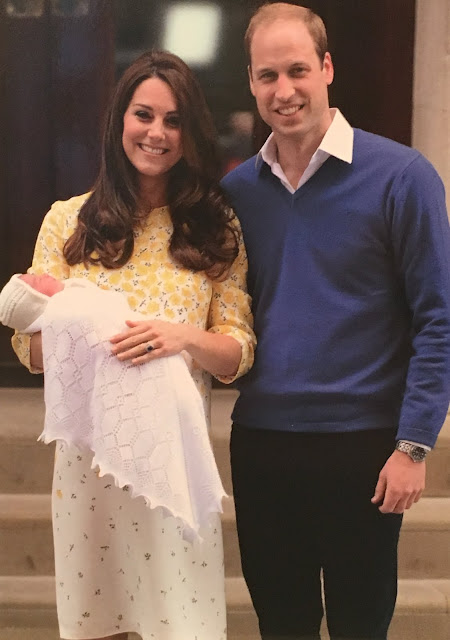 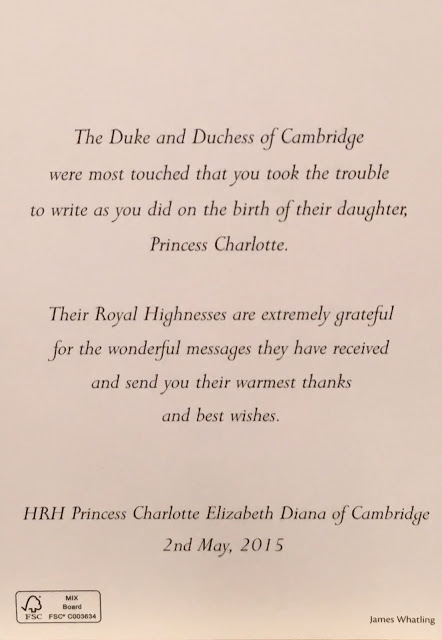 The Duke and Duchess of Cambridge were most touched that you took the trouble to write as you did on the birth of their daughter, Princess Charlotte.

Their Royal Highness are extremely grateful for the wonderful messages they have received and send you their warmest thanks and best wishes.

Kensington Palace shared a look behind the scenes of all the letter they received from around the world for Princess Charlotte's birth.


The Duke & Duchess are very grateful for the wonderful messages they've received on the birth of Princess Charlotte. pic.twitter.com/HOI0Xp2d7r
— Kensington Palace (@KensingtonRoyal) June 6, 2015

Thank you to everyone who took the time to make handmade gifts for Princess Charlotte - here are a few of them! pic.twitter.com/HgakDrRHXr
— Kensington Palace (@KensingtonRoyal) June 6, 2015

Because I know this has long been a point of interest, I just wanted to confirm that yes, technically you can send your letter to the Cambridges/Harry to Kensington Palace, Buckingham Palace or Clarence House. But Clarence House is where the letters are replied to by Prince Charles's correspondence section. If you send it anywhere else, it is collected and taken to Clarence House.

Back to Replies - Main Page
Posted by Gert's Royals at 3:33 PM