It was quite exciting to find this reply waiting for me at home when I returned from my Christmas holiday. The card is from Prince Albert and Princess Charlene of Monaco. I had written to them for their twins, Crown Prince Jacques and Princess Gabriella's, 1st Birthday on December 10th. 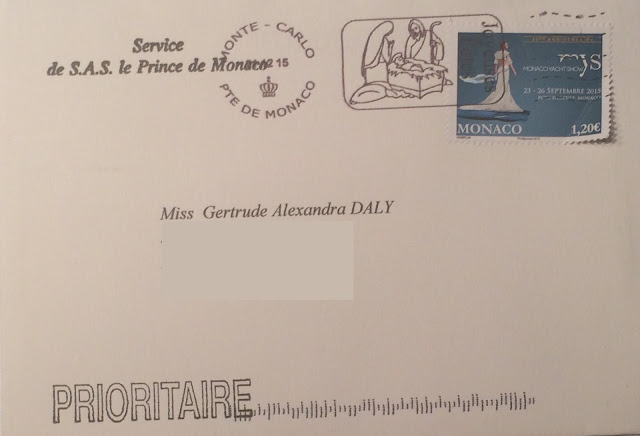 The postmarks and stamps from Monaco are always really interesting. This postmark features a nativity scene and with the words "Joyeuses Fetes," which is French for Happy Holidays. The stamp is for the Monaco Yacht Show, which was September 23-26th.

One of the interesting things about the envelope was that it didn't feature any monogram/ cypher on the back. Replies sent from Prince Albert and Princess Charlene usually feature their joint monogram, a red "AC" with a crown on top.

Inside was a bi-lingual thank-you card. The card is written in both French and English. The top of the card features Jacques and Gabriella's monogram as well as the Royal Family's coat of arms. 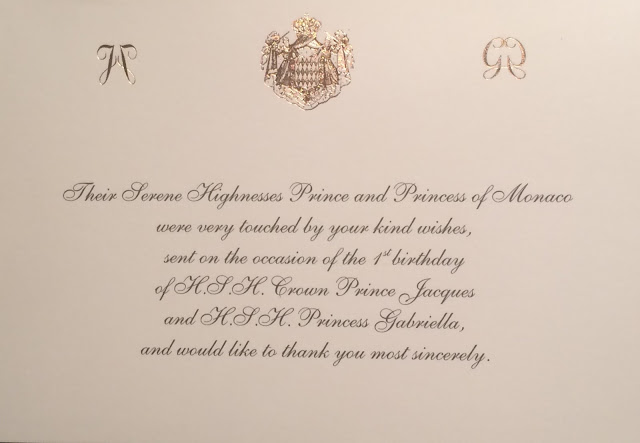 One of the interesting things about this card was the use of the term Crown Prince. We have seen Prince Jacque been called both Crown Prince and Hereditary Prince. They both mean the same thing, that Jacque is the heir apparent.

Crown Prince/ss is the more common term used by other european monarchs, but I feel like Hereditary Prince has been used more by Monaco historically. In French, there is just one term "Prince Héréditaire" which is always used. 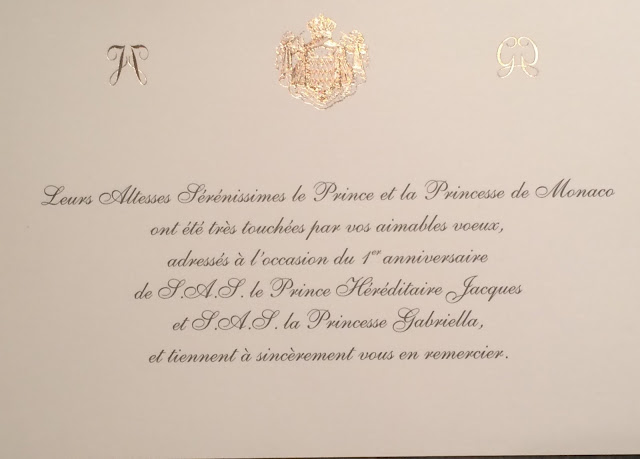 
Their Serene Highnesses Prince and Princess of Monaco were very touched by your kind wishes, sent on the occasion of the 1st birthday of H.S.H. Crown Prince Jacques and H.S.H. Princess Gabriella, and would like to thank you most sincerely.

Prince Albert and Princess Charlene gave an interview to mark the Twin's 1st birthday. (It is bilingual- both French and English with subtitles).

The 1st response to my Christmas letters arrived today. Although this was one of the 1st letters I managed to mail out, I certainly wasn't expecting a reply so quickly! The letter comes from Queen Margrethe and Prince Henrik of Denmark. 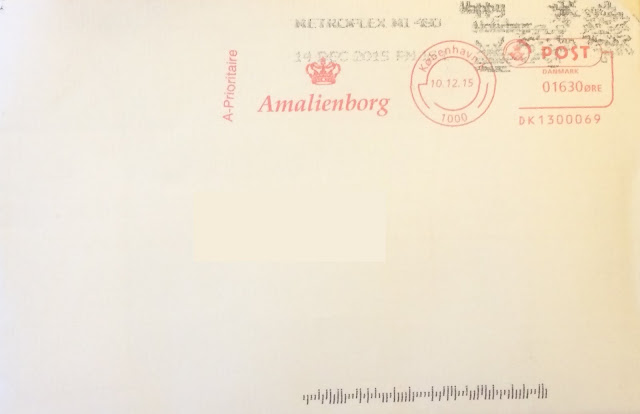 The envelope looks similar to one I have received when writing to the Crown Prince Frederik and Crown Princess Mary, except the crown on the card and the back of the envelope was blue instead of black.

The letter is a typical Christmas response, it has a generic message. But the letter is personalized with my name, the date the letter was written and the signature of Ingelise Riedel is hand-signed. 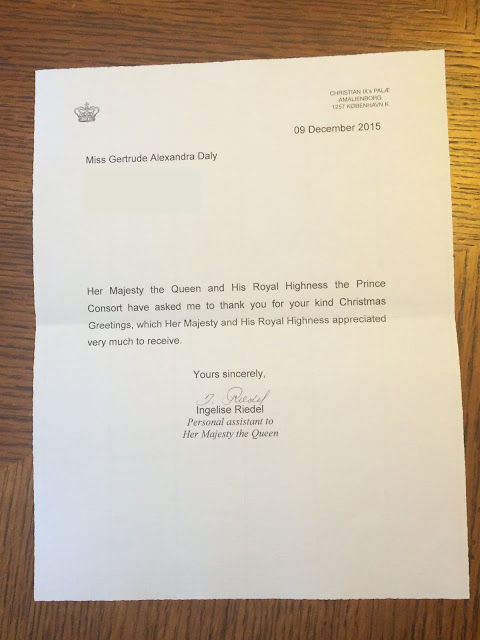 
Yours Sincerely,
Ingelise Riedel
Personal Assistant to Her Majesty the Queen

If you still want to mail Christmas Cards to the Royals, there is still time. We have reached that point where if you are mailing internationally, your letter may not arrive by Christmas.  But as long as you get your card out in a reasonable time it is fine if it doesn't arrive on time. It takes a while for royals to send out replies.

Back to Replies - Main Page
Posted by Gert's Royals at 3:18 PM