A lovely reply arrived today from Belgium. I had written to King Philippe last month to wish him a wonderful 60th birthday.

The Belgium Royals have a number of envelopes that they use. This is one of the most common with "Palais De Bruxelles" (Palace of Brussels) written on the front under a purple crown. 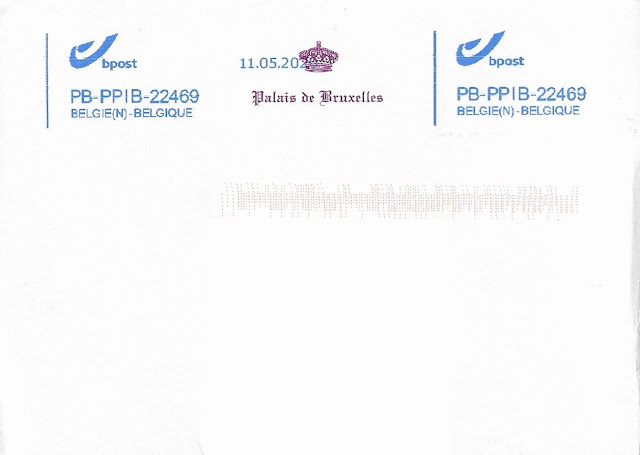 As this is an extra special birthday, this reply is nicer than usual. It is a lovely folded card, instead of the usual flat card for birthdays. The card is the same size as the family's annual Christmas card. And in terms of panel size is the same as Princess Elisabeth's 18th birthday reply last year.

The front of the card features King Philippe's monogram, under The Royal Crown of Belgium.  Although drawn differently, the crown is the same one as on the envelope. The monogram and border are embossed, which combined with the weight of the card give the card a very lovely feel. 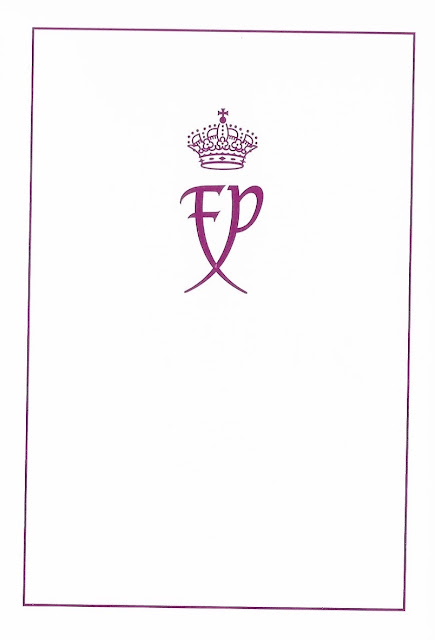 Inside is a message in French. The Palace usually prints out cards in Dutch and French, at least. Most of the time, when you write English, you will get a French Reply. But I think it just depends on which card they have more left of. 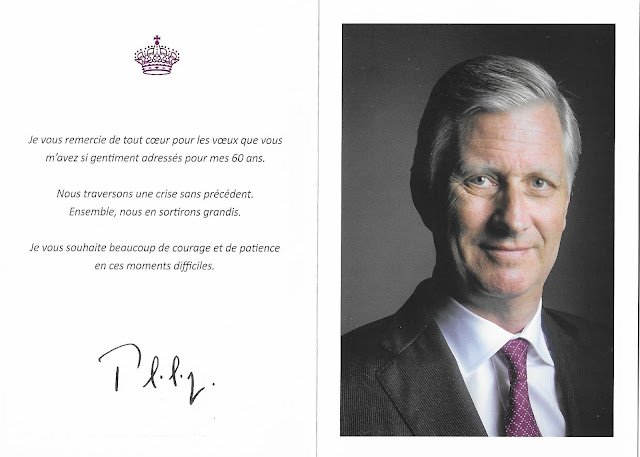 
I thank you with all my heart for the wishes that you have so kindly addressed to me for my 60th birthday.

We are going through an unprecedented crisis. But, together we will overcome this.

I wish you lots of courage and patience during these difficult times.

The photo is the same one used to mark the King's birthday on social media. The photo was taken as part of King Philippe's March 16th televised speech on the coronavirus. I think it was very fitting to use that photo here, as the birthday thank you touchings on the Coronavirus Pandemic.

--
This reply arrived a little over a month and a half after I wrote, which is an excellent response time, especially given the circumstances. But, I would not expect other royal offices to be so prompt. With most royal offices working with a reduced staff I expect we will see longer response times. (This is my first reply in 2 months, which is the longest I have gone without a reply since I started writing to the royals regularly.)

The postmark is from 7 days ago, so there wasn't much delay as the reply traveled overseas. The National Postal Service, in all 10 Current European Monarchies, is still sending/receiving international mail. And I have not heard of any Royal office refusing to accept mail.

--
On a side note, as I said in previous posts I moved at the beginning of March. This is my first reply to a letter that I sent using new address. The Belgium Palace thankfully used my correct address, so the reply got safely to me.

Some Monarchies store your address & other information in a database. When I have moved a few years ago, there were some replies that got sent to my old address because they pulled the info off of their database. I know for sure the UK, Denmark & Monaco royals use a database, others probably do as well. And this issue with using my old address wasn't just a problem for a few months. A reply from Denmark was sent to my old address THREE years after I moved. (There was also a time when pretty much all of my mail from the UK Royals had the exact same spelling error because there was an error in their database.)

So, to help make it clear that my address has been changed, that they should update their database, should they have one, I included "New Address" in green on my envelope. And I plan on using this on all my Royal Mail for the next few months. I thought it was a very subtle way of indicating the address change. And, we will see if this prevents the problems I had last time.

Back to Replies - Main Page
Posted by Gert's Royals at 5:17 PM 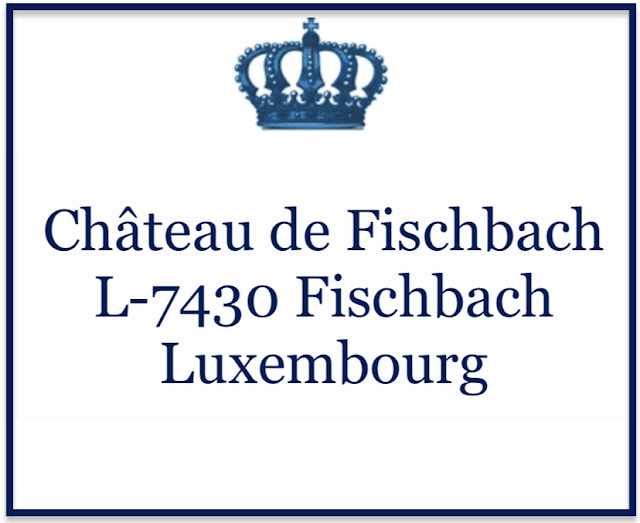 Please note this is a different address than the one normally used by the Luxembourg Royal Family. The Palace has asked that well-wishers wanting to send congratulations on the birth of Prince Charles write using this address.

When to write?
Don't feel like you have to get your letter/card out today. I usually try to write within 2 weeks of the event.

What to Write?
I very often get asked this question. The answer is, write whatever you feel like writing about. There is no one right answer. As long as you are being respectful and thoughtful, it is hard to go wrong.

You can send a letter or a card, either is perfectly fine.

How to Style the Couple
How you refer to the couple depends on how formal you wish to be,

Sending a Gift?
The Royals prefer well-wishers make a donation to charity instead of sending a gift. The couple suggested well-wishers donate to their foundation, Fondation du Grand-Duc et de la Grande-Duchesse.


But feel free to make a donation to a local children charity if you prefer.


What to Expect in Reply?

I would expect they would send out the usual flat card for the occasion. So, I would expect something similar to the reply I received for Prince Liam's birth.
Posted by Gert's Royals at 4:48 AM