A letter arrived earlier this week from the UK. I had written to Prince Philip to send him my best wishes for a speedy recovery following his hip replacement surgery. 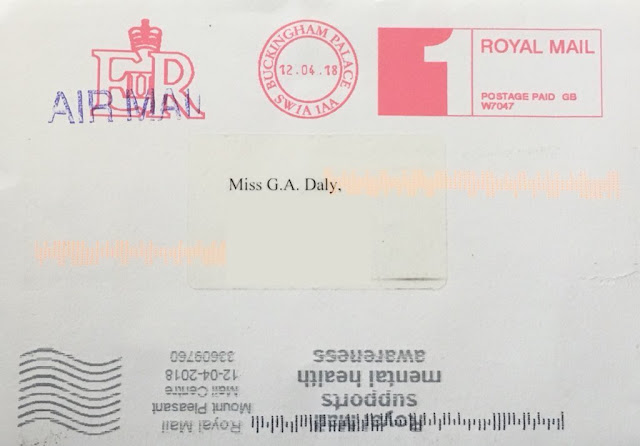 The letter is from Mrs. Suzy Lethbridge, Prince Philip's Correspondence Secretary. This is the 1st time I've gotten a reply from her. In the past, I've always gotten replies from one of Prince Philip's Assistant Equerries. 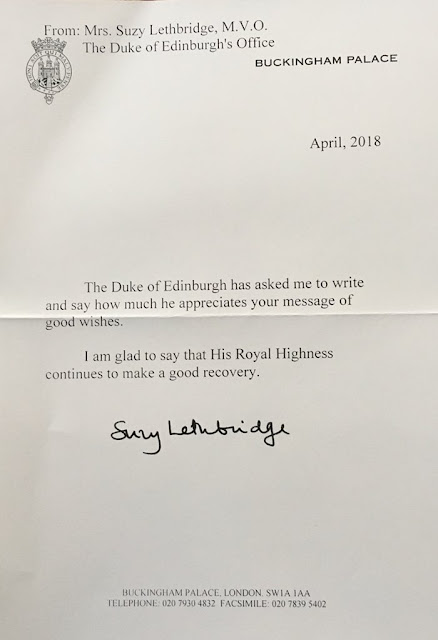 The letter is a form letter they send out to everyone who wrote to Prince Philip after his surgery. The signature is printed on.

Back to Replies - Main Page
Posted by Gert's Royals at 7:32 PM

A reply arrived today from Monaco for the letter I sent Prince Albert for his 60th Birthday. The reply is similar to his past birthday replies.

The envelope features a postmark celebrating the 50th Anniversary of the P.E.N. Club of Monaco. The P.E.N. Club is an international organization of Poets, Playwrights, Editors, Essayists, and Novelists. The envelope also features a stamp commemorating the 2017 Monte-Carlos International Circus Festival, which Princess Stephanie is president of and a stamp of an Anthias Anthias fish (commonly known as the swallowtail seaperch) which is native to the Mediterranean Sea, where Monaco is located.

The reply is the usual flat card, with Prince Albert's Monogram embossed. As always, the card is dated with Prince Albert's Birthday. They have changed up the message slightly year to year. Unlike Princess Charlene's birthday replies, Prince Albert's are not always bi-lingual. But of course, there is a french version of the reply they can send out. The signature is printed on.

Palace of Monaco
March 14th, 2018.
I was very grateful to receive your kind wishes on the occasion of my 60th Birthday and I send you my very best regards.

You will probably notice the lines on the paper. It is called laid. It is from the paper manufacturing process. Laid Paper is an older paper making technique that was originally done by hand with wire screens, that created the distinctive line. I really like it because it gives the paper a really nice texture and feel. And, as it is a more expensive process, it's usually higher quality paper.
Back to Replies - Main Page
Posted by Gert's Royals at 4:47 PM