A lovely reply arrived from Belgium for the Christmas letter I sent King Philippe and Queen Mathilde. 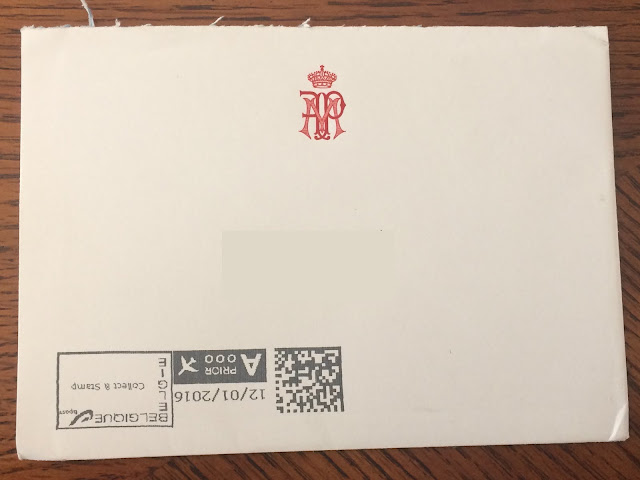 One thing I have noticed over my experience writing to the Royals is that each country has a very distinctive postmark. Without even reading the country name, I know immediately this envelope was from Belgium.

This postmark is quite simple, but you will notice that the post office put it on the bottom of the envelope, instead of the top. This is so that the Postmark doesn't overlap with the Monogram. 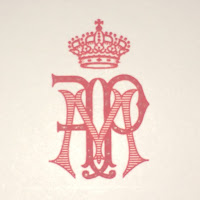 My thoughts are that is more about making sure the computers at the post office can read the postmark and properly sort the letter, than preserving the monogram.

Another interesting thing is, of course, the monogram. You have Queen Mathilde's M, interlocked with an F & P for King Philippe. The F & P stand for the different spellings of King Philippe's name in the 3 official languages of Belgium.

Inside the envelope is the Royal Family's Christmas card. The front of the card is simple, it has a red border with the couple's joint monogram. Inside the card, is a message with a family picture. 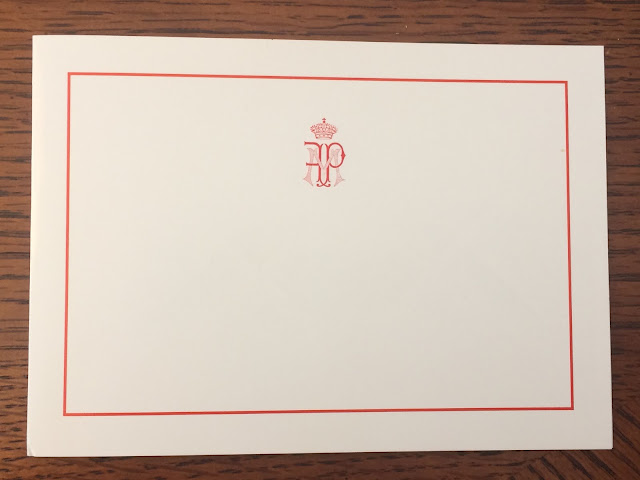 The Message is written in the 3 official languages of Belgium as well as English: "Merry Christmas and a Happy New Year." The King and Queen's signatures are printed onto the card, with their 4 children's names typed below (in order of age). 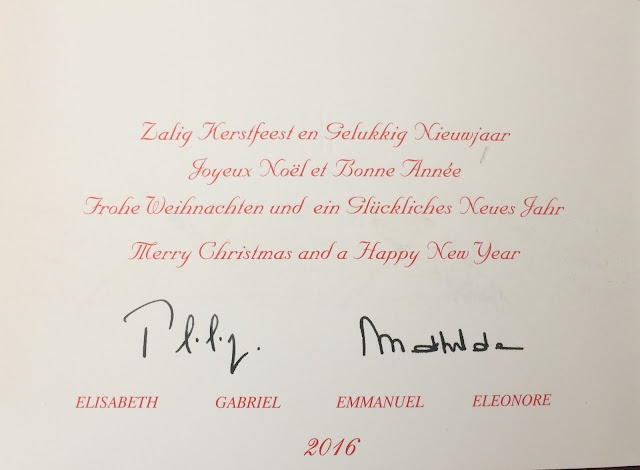 I'm not entirely sure when the photo was taken. But the photo released for Princess Elisabeth's birthday in November looks like it comes from the same shoot. 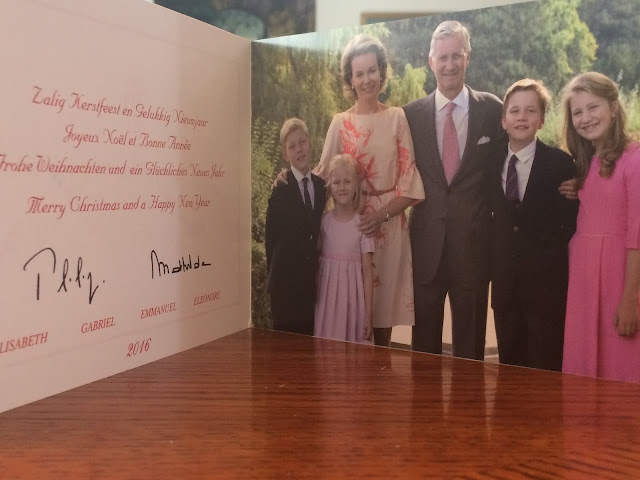 This was the 2nd time I had written to King Philippe and Queen Mathilde, the first being after the death of Queen Fabiola in 2014.

Back to Replies - Main Page
Posted by Gert's Royals at 7:58 AM

The photo is the same as his Birthday Card. The photo is of him during Walk of Britain, with Walking With the Wounded. (He did this with his previous Christmas & Birthday reply in 2014 as well, using a photo from Invictus Games for both).

Another interesting note is Harry's Christmas and Birthday replies both this year and last year featured pictures by Chris Jackson. 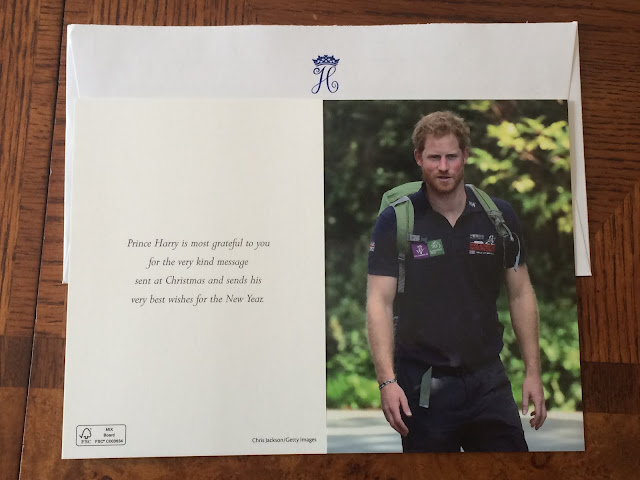 The message on the card is the same as last years. Which is fine, I do like how the wording is slightly different than the Cambridges and Charles and Camilla's reply.


Prince Harry is most grateful to you for the very kind message sent at Christmas and sends his very best wishes for the New Year.

It is weird that once again we aren't seeing the pic that Kensington Palace released for Christmas. I understand they are using the photo for their private Christmas cards, but it seems odd to me that they would release the pictures to the public, but not use them. Normally, there may be an issue of not having the photo released yet when they are printing the replies, but this picture below was released back in September.

Today, a reply arrived from the UK. I had written to Prince Charles & Duchess Camilla for Christmas. It looks a lot like the standard Cambridge/Harry reply; postcard-sized picture with a typed message on the back. This is the 2nd time, I've gotten this type of reply from Charles/Camilla. The first being Prince Charles's Birthday this past year.

For Prince Charles's previous birthday and Christmas, I received letters. However, I have seen photo reply like this that other people have received from them in the past, so this isn't a big change. 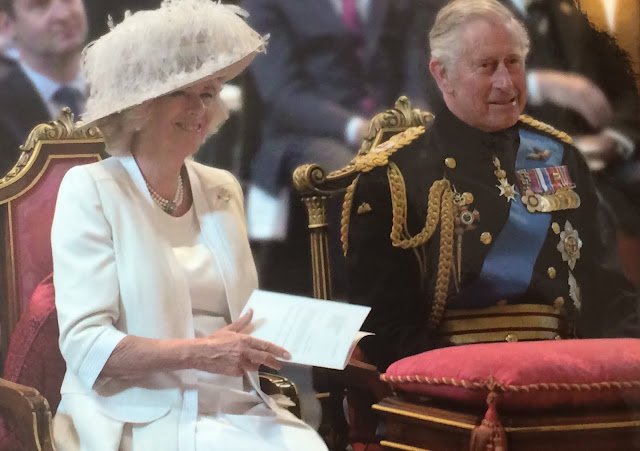 The photo is of Charles and Camilla at the service to mark the 200th Anniversary of the Battle of Waterloo, at St Paul's Cathedral on June 18, 2015. A little interesting they didn't choose to use the photo they had released for Christmas. It could be that photo was just for their private/personal Christmas card. And they wanted their public Christmas card to feature some of the work that they have done this year.

The message on the card is slightly different and longer than the Cambridges, but says basically the same thing. 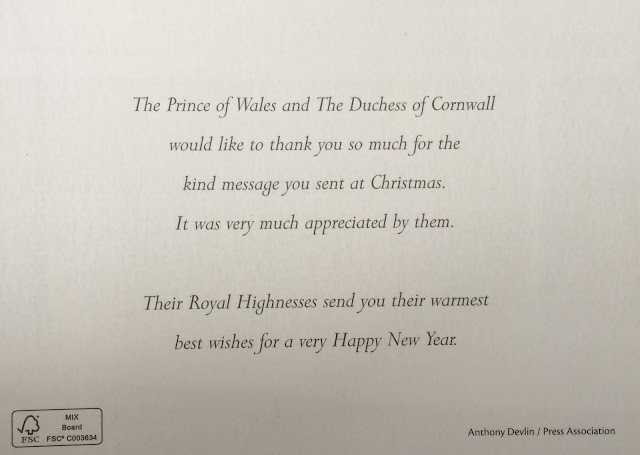 
The Prince of Wales and The Duchess of Cornwall would like to thank you so much for the kind message you sent at Christmas. It was very much appreciated by them.

Their Royal Highnesses send you their warmest best wishes for a very Happy New Year.


I want to apologize for the not so great quality of the front of the card. I think it is partly the printing of the card, and photoshopping. The printing caused it to be a little pixelated as well as have a stray line by Camilla's armrest and pillow behind her. They also blurred the background of the picture slightly, which gives everything sharpened a weird edge.

Back to Replies - Main Page
Posted by Gert's Royals at 3:35 PM

Today, I received a Christmas Card for the Netherlands!

I wasn't sure what to expect since I hadn't written to the King Willem-Alexander & Queen Maxima for Christmas before. Although, I have written to them once before. 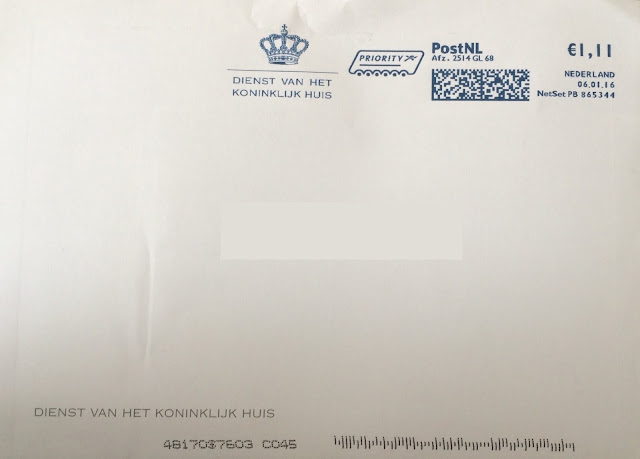 The envelope looks almost exactly like before. Except the price of postage has gone up of few cents. The message under the Blue Crown reads "Dienst Van Het Koninklijk Huis" (Bureau of the Royal Household)

Inside was a card, with a lovely winter scene, and typed message on the inside. 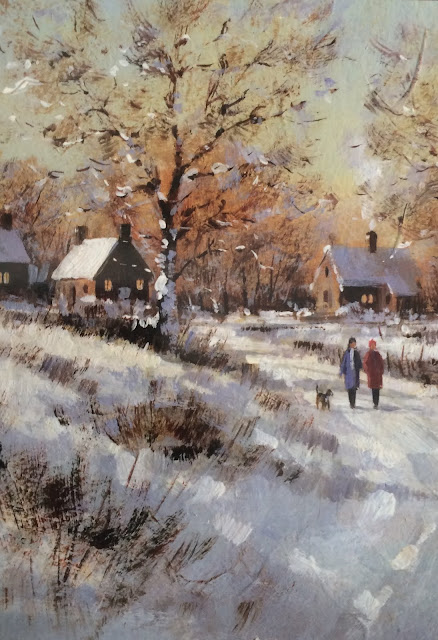 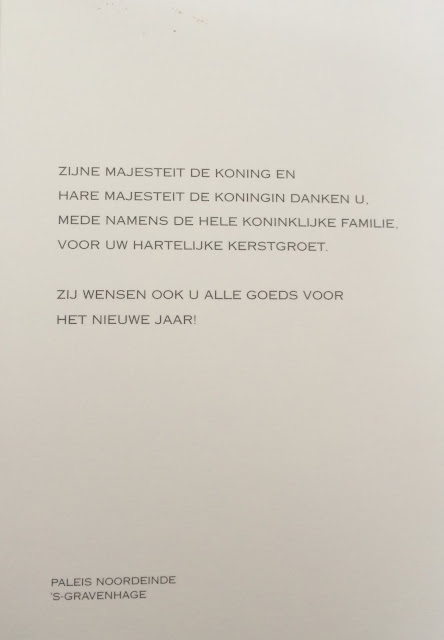 The Message is in Dutch and reads:

His Majesty the King and Her Majesty the Queen thank you, on behalf of the entire royal family, for your heartfelt Christmas greeting.


They wish you all the best for the New Year!

It is a very lovely message and card. But my favorite part was the back. This card was produced by Belarto in the Netherlands to raise money for UNICEF (United Nations Children's Fund). It's really great to see them using their Christmas Card to support such a great cause.

Queen Máxima is currently a United Nations Secretary General’s Special Advocate. She is working with their Inclusive Finance for Development program, which helps and encourages countries to create financial programs, such as savings accounts, insurance, loans.

This is definitely one of my top Christmas Cards this year.

Back to Replies - Main Page
Posted by Gert's Royals at 9:06 AM

Today, I received a Christmas reply from the Cambridges. It is their standard reply, a postcard-sized picture with typed note on the back. The photo is from Princess Charlotte's christening on July 5th. It is one of two photos that have been released of the whole Cambridge Family. The message on the card is the exact same as the message on their Christmas Card last year, except for the addition of Princess Charlotte's name. 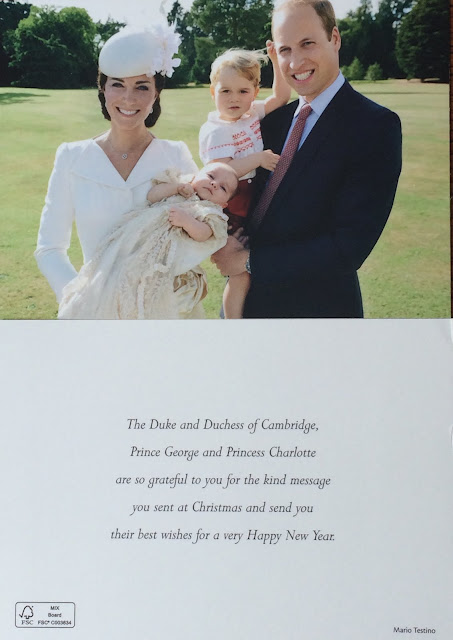 
The Duke and Duchess of Cambridge, Prince George and Princess Charlotte are so grateful to you for the kind message you sent at Christmas and send you their best wishes for a very Happy New Year.

We saw this same christening photo used for Princess Charlotte's Christening reply. This is not the 1st time they have sent the same photo on two replies. Last year, Harry's Birthday and Christmas reply used the same photo and so did George's 1st birthday and Catherine's announcement of her 2nd pregnancy.

The Cambridges choose not to use the Christmas picture they released last month, on their reply. That was likely used on their personal Christmas Cards to Family and Friends.

We still have a bunch of Christmas replies we are waiting on, I would expect we will be waiting for replies till the end of this month, or early next month.

I looked back at my Christmas replies from last year, the last one came in March.  It was from Denmark. They have a pretty great response time in getting their replies out, but the Crown Prince Couple usually sends their replies economy which means it taken forever to arrive. Sometimes up to 45 days in the mail.

I knew exactly what to expect when I saw this in the mail today. There is no mistaking that this was from the Monaco royals. And since they were nice enough to already release a photo of their Christmas card, I knew exactly what was inside. 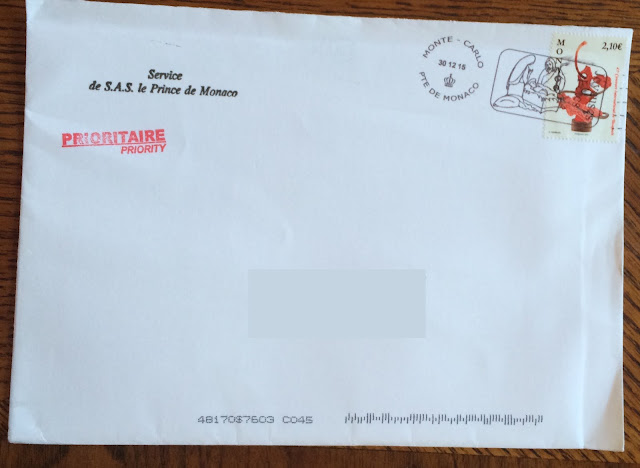 One of the interesting things about Monaco's reply are the stamps. This stamp marks the 47th International Bouquet Contest, which happened in June 2014. (The stamp was released in February 2014, which makes it older than the twins!) The bouquet on the stamp won the Golden Badge in the category "Danse/Dance" in 2013.

My guess is they constantly get new stamps in their office to mark upcoming events, so they cycle through stamps before they had a chance to finish using them all. And since it is the end of the year they are trying to use up all the old ones. The stamp from the Crown Prince Jacques and Princess Gabriella's Birthday was a few months old as well. 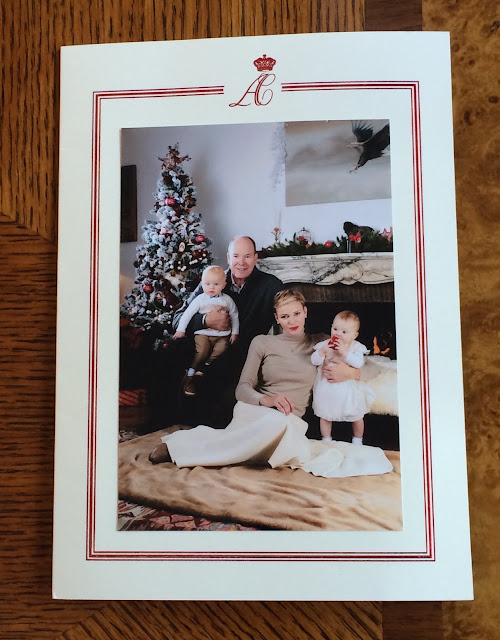 The front of the card features a lovely photo of the family. What was really interesting is that the photo is attached to the card, not printed directly on it. This makes it a higher quality picture.

The red "AC" at the top is the couple's joint monogram. 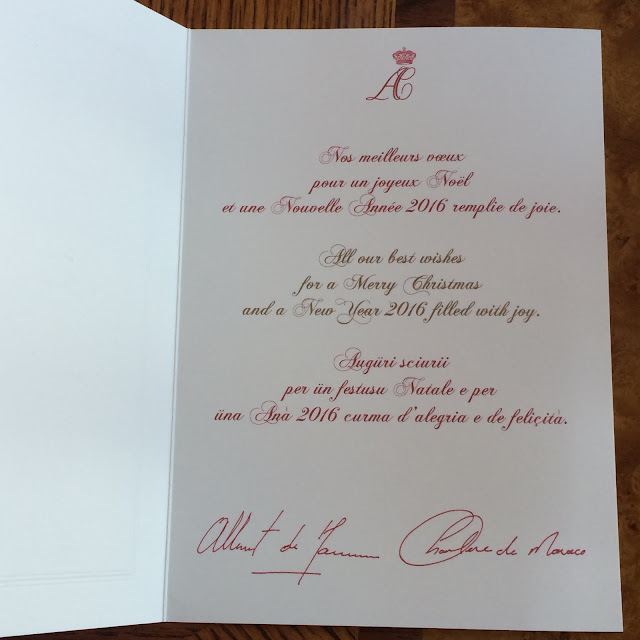 The message on the inside is repeated in French, English and Monégasque, and reads:


"All our Best Wishes for a Merry Christmas and a New Year 2016 filled with joy."

Prince Albert and Princess Charlene's signatures are printed on. All the responses I have gotten, use the same signature. 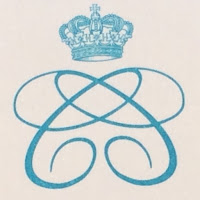 One thing that was very interesting about this reply, was the envelope featured Princess Charlene's Monogram on the back. Usually, when the couple is sending things jointly, they use their joint Monogram.

Back to Replies - Main Page
Posted by Gert's Royals at 8:45 AM