Back to Replies - Main Page
Posted by Gert's Royals at 6:27 PM

2015 was the 2nd year of writing to the Royals for Christmas. And I had expanded my Christmas list from the previous year adding a few more royals.

Back to Christmas - Main Page
Posted by Gert's Royals at 5:38 PM

2014 was the first time I had ever written to the Royals for Christmas. I was still pretty new at this, as I had only started writing a few months previous. My Christmas letter to Crown Prince Frederik &  Mary was one of the very first letters I had written to a foreign royal. And they were the only foreign royals included on my Christmas list. (Although I did get a Christmas reply from Monaco as I had mentioned Christmas in my letter about the Twins birth.)

Back to Christmas - Main Page
Posted by Gert's Royals at 5:21 PM

A very lovely reply arrived today from the UK. I had written to Duchess Meghan last month for her birthday.

The envelope is the usual for the British Royals, featuring the red EIIR postmark from the Court Post Office at Buckingham Palace. 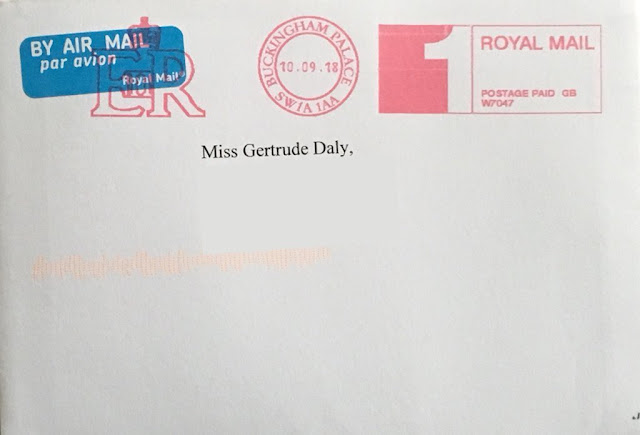 The back of the envelope features the Black Crown, Kensington Palace mark that is used by The Cambridges & Sussexs. This crown also appears on William, Kate, Harry & Meghan's monogram. 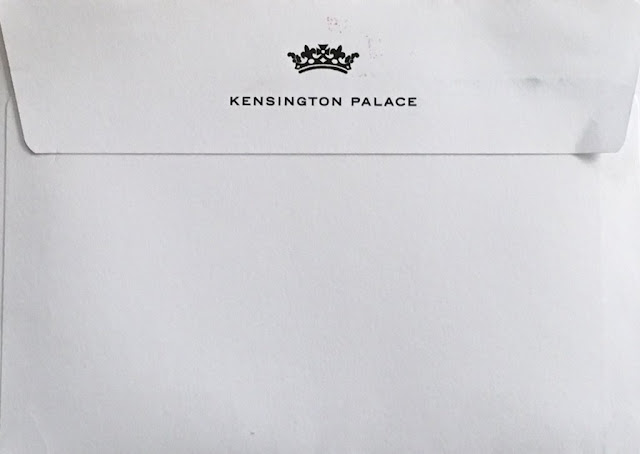 Inside is the usual birthday reply from Clarence House, a postcard size photo card with typed message on the back. 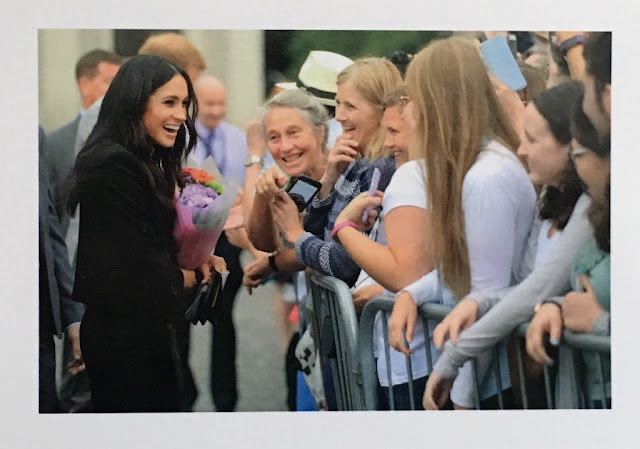 The photo was taken during the Sussex's visit to Trinity College in Dublin during their 2-day visit to the Republic of Ireland in July. This is a very interesting choice for Meghan's birthday photo. Normally for birthdays, we get a solo headshot or full body photo of the royal. (The only time I've gotten a group photo from Clarence House for a royal's birthday was Prince George's 1st & 2nd birthday.)

It's also very interesting that Meghan chose a photo taken outside the UK and by an Irish photographer. Gerry Mooney gave an interview about being called by Kensington Palace and asked for permission to use his photo on Meghan's birthday card.

The message is the typical for the Royals. 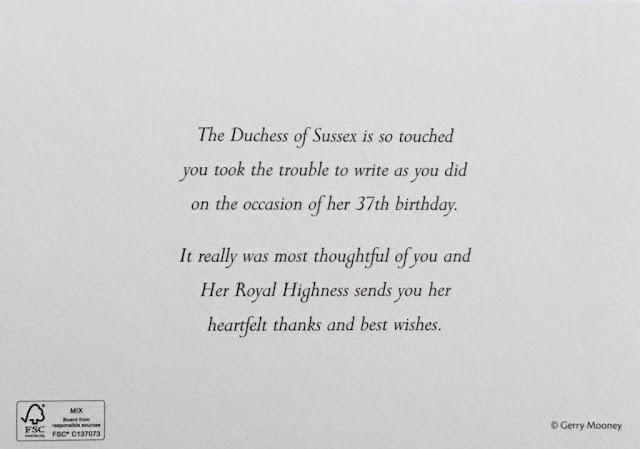 
"The Duchess of Sussex is so touched you took the trouble to write as you did on the occasion of her 37th birthday. It really was most thoughtful of you and Her Royal Highness sends you her heartfelt thanks and best wishes."

A reply arrived from the UK today. I had written to Duchess Camilla in July for her 71st birthday.

The reply came by registered mail, which Camilla usually does when the reply is hand signed by Camilla. 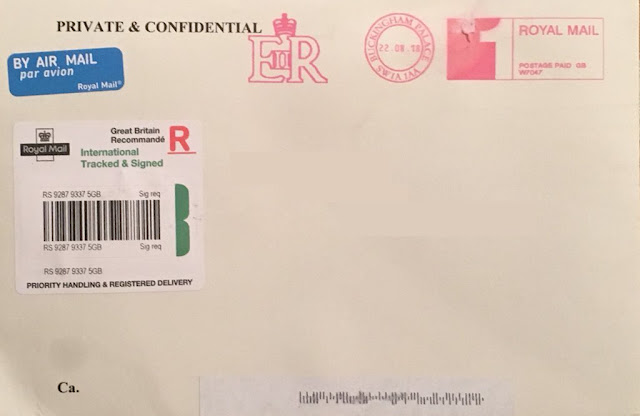 The back of the envelope features Camilla's blue monogram. 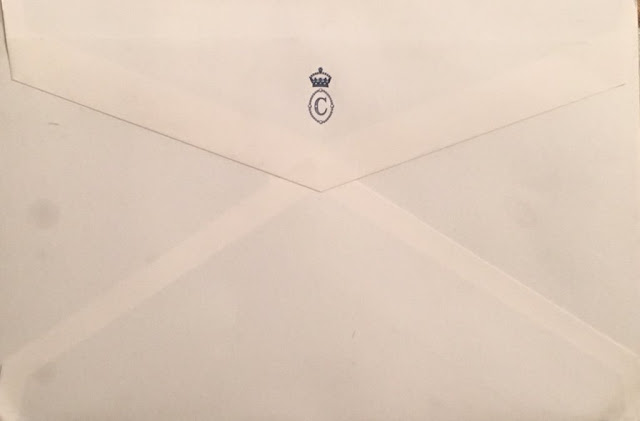 Inside is Camilla's usual birthday reply, a large photo card, with a typed message on the back, which she has personally signed. 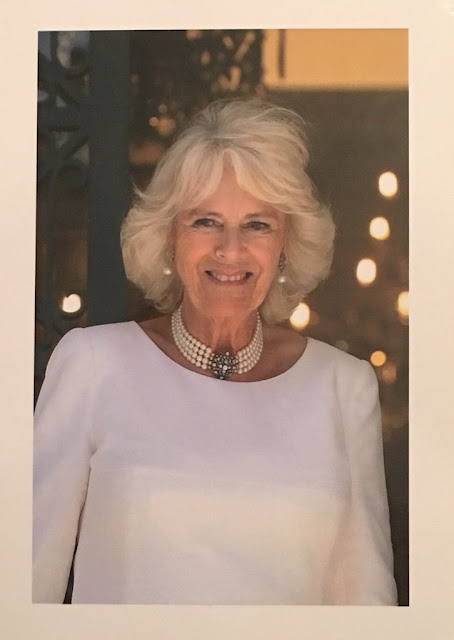 The photo was taken by Chris Jackson on Charles & Camilla's tour of Greece in May. 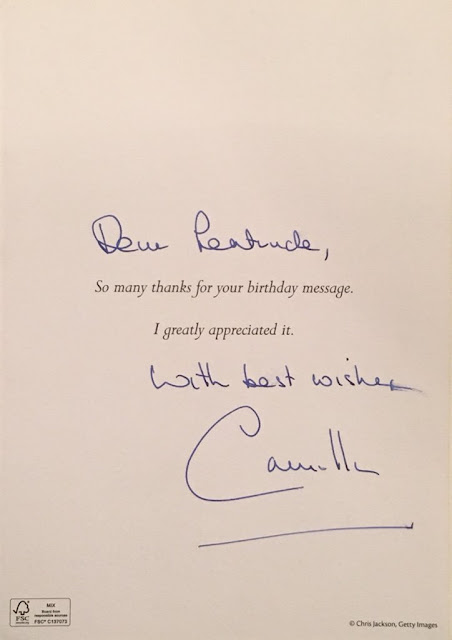 So many thanks for your birthday message. I greatly appreciated it.

We are in the process of moving all of our replies over from Gert's Royals. You can find our old replies that haven't been moved yet, here.

Back to Replies - Main Page
Posted by Gert's Royals at 4:51 PM