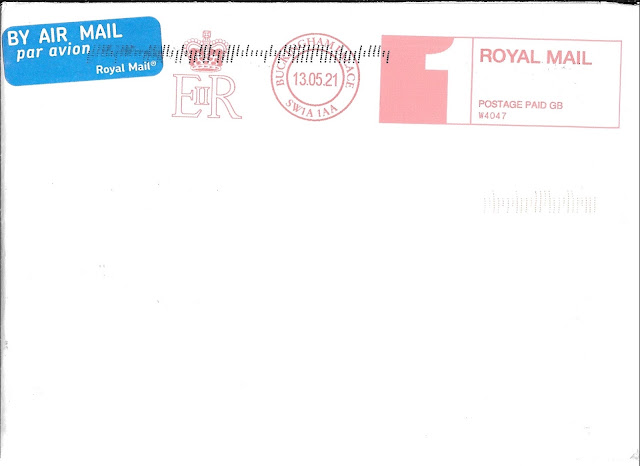 The back of the envelope may look like the usual from Prince Charles with his Prince of Wales feathers. But, actually, this is different. Normally, Prince Charles's envelopes have the feathers in Red. This envelope uses black as part of the mourning of Prince Philip. 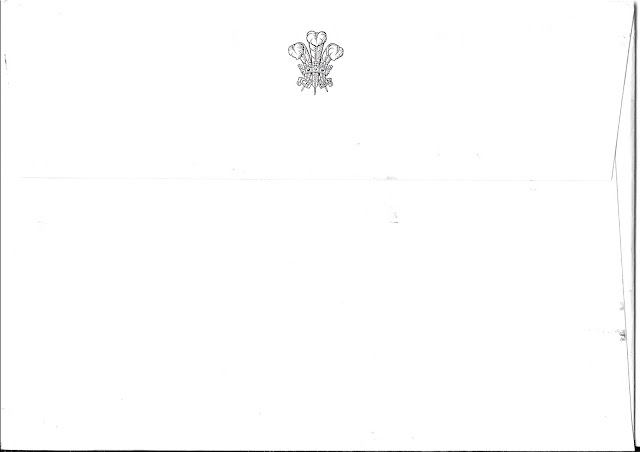 Inside is a folded card. The front of the card features Prince Charles's Badge. The center of the badge has the Prince of Wales feathers. They are surrounded by the Order of Garter Belt and topped with the coronet of the heir apparent.
The black edge is a victorian era tradition for mourning. 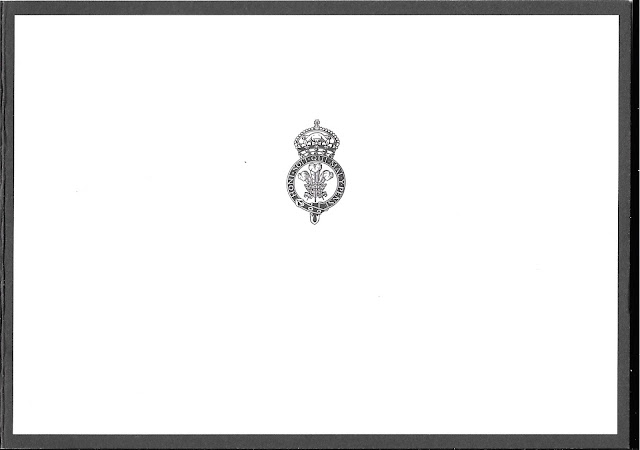 The inside left features a photo of Prince Philip & Prince Charles at a boat race in Isle of Wight in 1958. Prince Charles would have been 9 years old then. 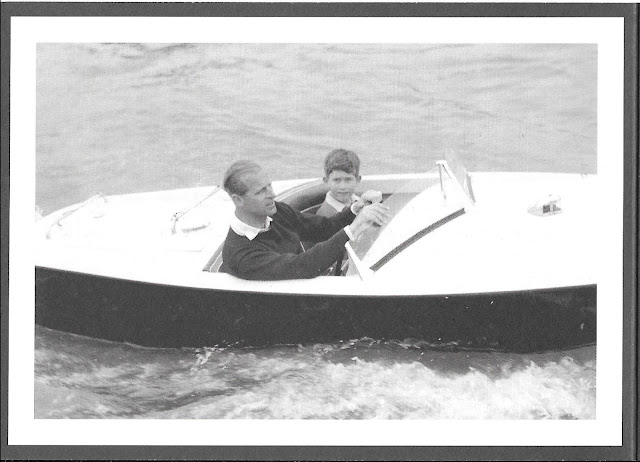 This photo was part of the set of photos shared after Prince Philip's death. But the photo isn't new, having been shared by Clarence House a number of times over the year.

— The Prince of Wales and The Duchess of Cornwall (@ClarenceHouse) June 10, 2020

The Prince of Wales and his father, The Duke of Edinburgh, take part in a motorboat race on the Isle of Wight in 1958. pic.twitter.com/DHd7EfkEss

— The Prince of Wales and The Duchess of Cornwall (@ClarenceHouse) June 18, 2017

The inside right features a typed message. 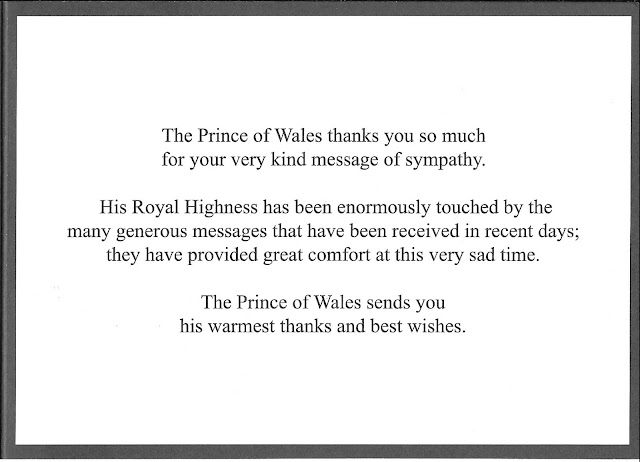 The Prince of Wales thanks you so much for your kind message of sympathy.

His Royal Highness has been enormously touched by the many generous messages that have been received in recent days; they have provided great comfort at this very sad time.

The Prince of Wales sends you his warmest thanks and best wishes.

The back of the card had a note about the photo. And includes the Forest Sustainable badge, which notes the paper is from a sustainable forest. 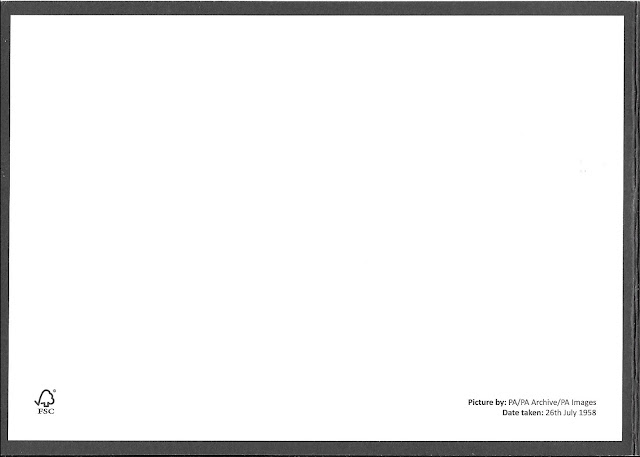 Condolence Reply for Prince Philip from the Wessexes (2021)

I received this reply last month from Prince Edward & Countess Sophie. I had written to them to express my condolences following the death of Edward's father, Prince Philip.

Other than the black edge for mourning, the envelope is the usual from the Wessexes. You may notice their mail does not feature the usual postmark that we see on other British Royals' mail. This is because the Wessexes's mail is not processed through the Court Post Office at Buckingham Palace, which processes all the mail from the London-based Royal offices. Instead, the Wessexes's mail is handled by their staff at their home at Bagshot Park in Surrey.

This postmark features their Sovereign Grant's old PPI number of W 7047. This was not redesigned in 2019 like the other royal postmarks to coincide with the switch to W 4047. You can find more the different Royal Postmarks here. 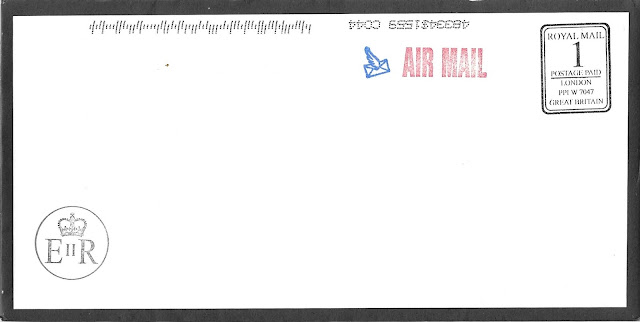 The back of the envelope features Prince Edward & Countess Sophie's joint coat of arms, above "Bagshot Park" the name of their home where the mail was sent from. 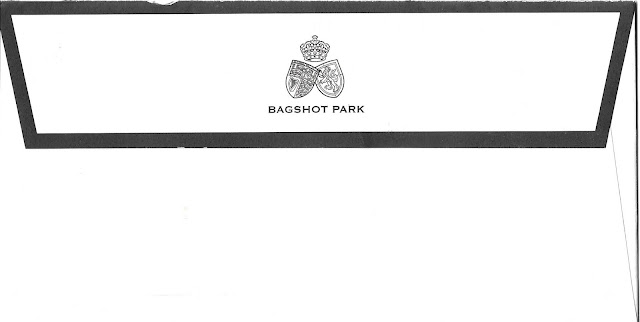 Inside is a folded card. The front of card feature's Prince Philip's badge. The center of the badge is Edinburgh Castle, chosen as a nod to Prince Philip's title, The Duke of Edinburgh. The belt surrounding that is the Order of Garter Belt, with the Orders' motto, Honi soit qui mal y pense (Middle French for Shame on him who thinks evil of it). The badge is topped with the Coronet of the Child of the Sovereign. (Philip started using this coronet when he married Elizabeth and was the son-in-law of the Sovereign. As there is no special coronet for the spouse of a Queen, he kept this.) All of these elements are also features on Prince Philip's Coat of Arms.

The front of the card says

The inside of the card features a photo of Prince Philip along with a typed message. 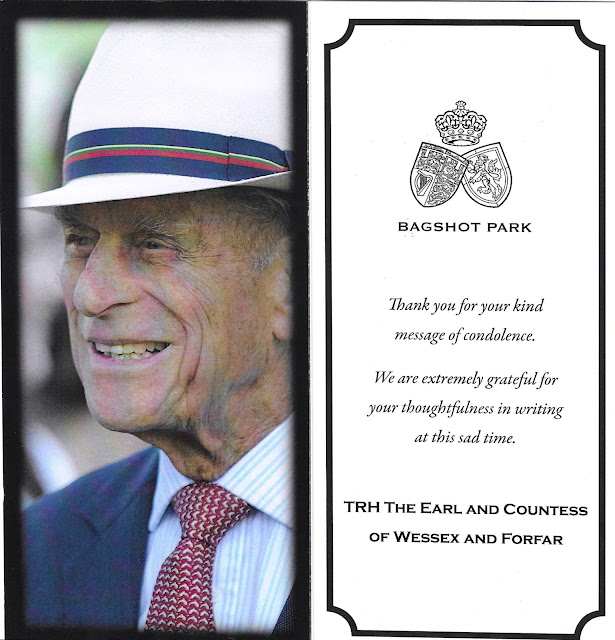 I did try tracking down the photo to figure out what event it was from. I wasn't able to find that out. But the photo has been used by the Duke of Edinburgh Awards a number of times. So, I would assume it is from Duke of Edinburg Awards event.

It’s with great sadness that we acknowledge the death of our Patron HRH The Duke of Edinburgh, he will be sadly missed. pic.twitter.com/27Ui8HFQAu

Choosing a Duke of Edinburgh Awards Event would be particularly meaningful to the Wessexes as they are heavily involved with the organization.

Thank you for your kind message of condolence. We are extremely grateful for your thoughtfulness in writing at this sad time.

TRH The Earl and Countess of Wessex and Forfar

Condolence Reply for Prince Philip from the Cambridges (2021)

This reply arrived a few months ago. I had written to the Cambridges following the death of Prince Philip.

The envelope is the usual from the British Royals featuring the postmark from the Court Post Office at Buckingham Palace. 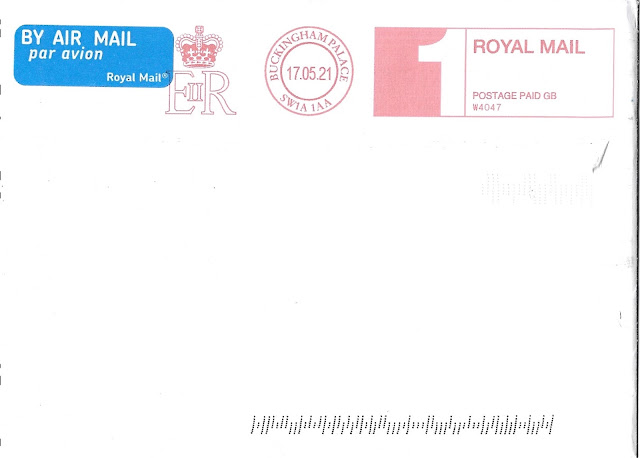 The back features the Cambridge's usual Black Coronet/Kensington Palace. This is a standard envelope for the Cambridge replies. Although they do have the same design in letter size. 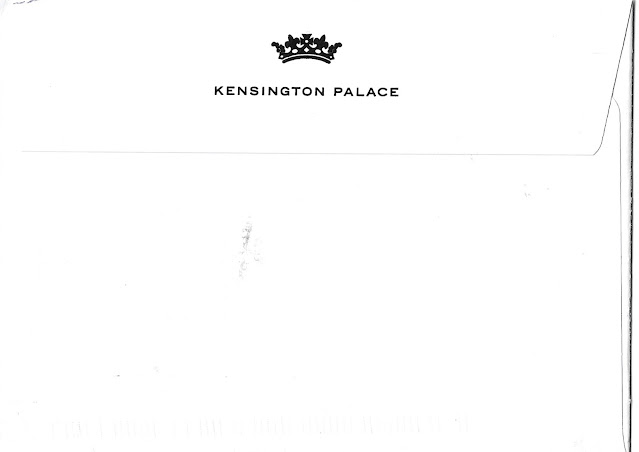 Inside is not the Cambridges' usual flat photo card. Instead, it is a glossy folded card. The front of the card features the couple's individual monograms, W & C under the coronets of the Children of the Heir Apparent. The back of the card has a photo credit, (c) Anthony Devlin, for the inside photo. 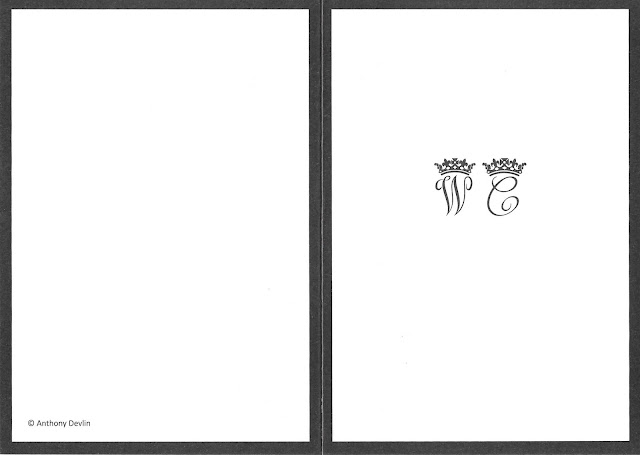 Due to its glossy finish and thicker card stock, this card seems a lot more durable than the couple's normal photocard. This is very nice as this, a goodbye to Prince Philip, would probably be a much more treasured memento from recipients than their usual photo card. So, it is nice that they made this something that would last an extra long time.
The black border is for mourning. And is an old Victorian-era tradition, that I find especially lovely. While some royals use this black mourning edging, it's not required that all royals use it.
The inside of the card features a photo of Prince Philip, along with a typed message. The photo is from 2012 when Prince Philip attended the Queen's Diamond Jubilee Armed Forces Parade and Muster at Windsor Castle. 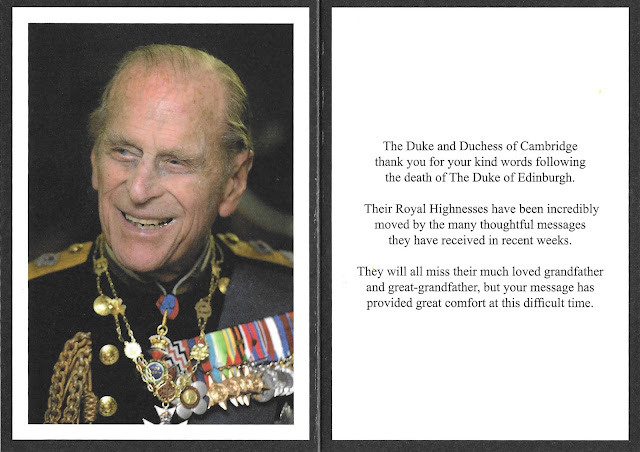 The Duke and Duchess of Cambridge thank you for your kind words following the death of The Duke of Edinburgh.
Their Royal Highnesses have been incredibly moved by the many thoughtful messages they have received in recent weeks.
They will all miss their much loved grandfather and great-grandfather, but your message has provided great comfort at this difficult time.

Back to Replies - Main Page
Posted by Gert's Royals at 7:03 PM