I had written to Prince Albert of Monaco earlier this month for his 59th Birthday. This lovely reply came in the mail today.

Their normal envelope, with Prince Albert's Red A Monogram on the back. The Postmark is for the annual "Printemps des arts de Monte-Carlo" (Monte-Carlo Art Festival) which runs March 17- April 8th this year. 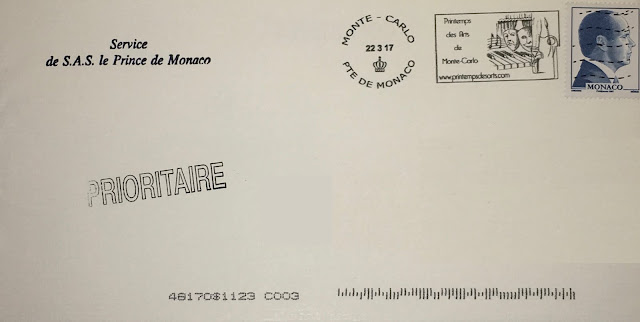 The card is similar to the previous years, although the message is changed slightly as they always do. Again this year the message is just in English. I assume they have a separate French reply. I'm not sure why they stopped making his Birthday card bi-lingual. Charlene and the Twins thank you birthday cards have remained bi-lingual.

The date, March 14th, 2017 is Prince Albert's Birthday. The signature is auto-penned.

The kind wishes received on the occasion of my birthday really touched me and I would like to thank you warmly.
Albert de Monaco

Back to Replies - Main Page
Posted by Gert's Royals at 4:54 PM

This is my new favorite Royal Reply! I'm kind of freaking out over it.

The reply is from Prince Edward, for the Birthday letter I wrote earlier this month. Many of you know the Wessexs hardly ever send a reply. I always tell people not to expect anything from them. So, I was definitely surprised by this. I started writing letters to the Royals in 2014, and have written to the Wessexs a number of times over the years. This is my very first reply from them.

The reply came from Bagshot Park, which is where the Wessexs live and have their offices. You will notice the postmark on the envelope is different than the letters that come from Buckingham Palace, Clarence House, etc. This is because their mail is handled by a different post office. 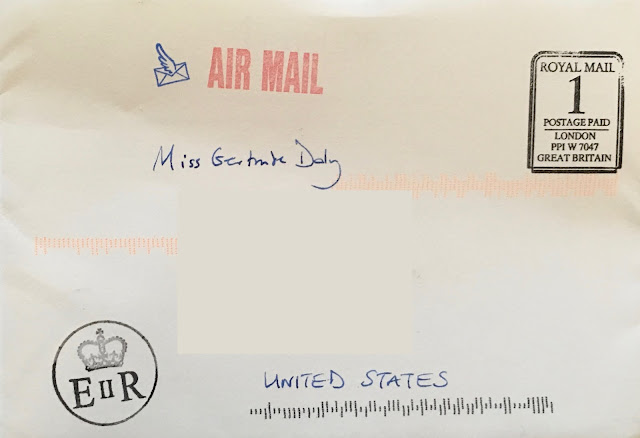 The envelope is handwritten. This is the 2nd time I've ever received a handwritten envelope. So it's very special. On the back of the envelope is the Wessexs' green cypher with Bagshot Park written underneath.

Inside is a letter. It is handwritten by Tim Roberts, who is Edward and Sophie's private secretary. It's a very personal letter and you can tell he is responding to what I said in my letter. It is one piece of paper written front and back.

The green cypher featured the couples combined coat of arms (which is made up of Prince Edward's and the Rhys-Jones Family coat of arms). 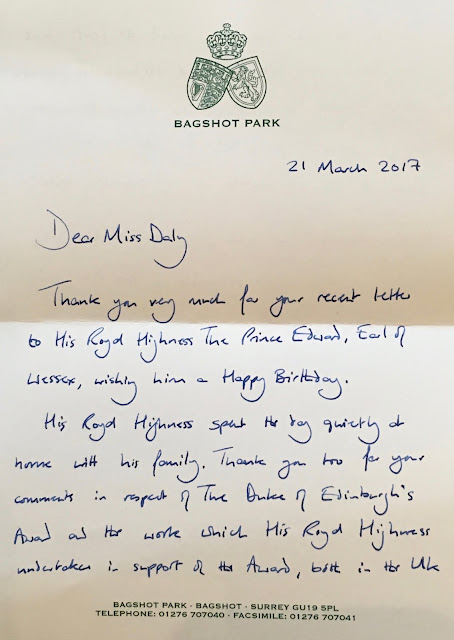 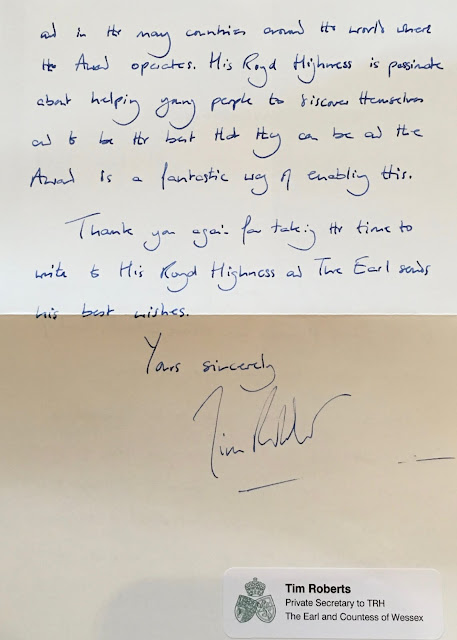 
Thank you very much for your recent letter to His Royal Highness The Prince Edward, Earl of Wessex, wishing him a Happy Birthday.


His Royal Highness spent the day quietly at home with his family. Thank you too for your comments in respect of The Duke of Edinburgh's Award and the work which His Royal Highness undertakes in support of the Award, both in the UK and in the many countries around the world where the Award operates. His Royal Highness is passionate about helping young people to discover themselves and to be the best that they can be and the Award is a fantastic way of enabling this.


Thank you again for taking the time to write to His Royal Highness and The Earl sends his best wishes.

I had written to The Queen and Prince Philip at the end of November to wish them a very Merry Christmas! 3.5 months later I finally got my reply.

The letter was sent from Buckingham Palace and was written by Mrs. Jennifer Gordon-Lennox. She is one of the Queen's Ladies-in-waiting and previously served the Queen Mum. This is the 1st letter I have gotten from her. 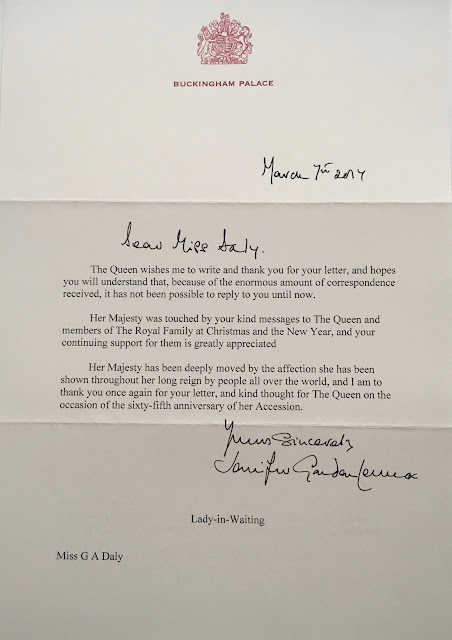 The Queen wishes me to write and thank you for you letter, and hopes you will understand that, because of the enormous amount of correspondence received, it has not been possible to reply to you until now.


Her Majesty was touched by your kind message to The Queen and members of The Royal Family at Christmas and the New Year, and your continuing support for them is greatly appreciated.


Her Majesty has been deeply moved by the affection she has been shown throughout her long reign by people all over the world, and I am to thank you once again for your letter, and kind thoughts for The Queen on the occasion of the 65th anniversary of her Accession.


It's a lovely letter. It's always nice when they mention what you wrote about (Christmas, Royal Family & Sapphire Jubilee).

Which on this occasion makes me a little sad. I had written my letter the day Zara Tindall announced she was pregnant with her 2nd child. So I had of course begun the body of my letter congratulating them on the new addition to the family in 2017. And my letter was very focused on the Queen and Phillip's grandchildren & great-grandchildren. I was very excited about the news and as The Queen and Philip are getting older, I think more and more about next generations, and what they will be like. I think you can see a lot of the Queen & Philip in the younger generation. Of course, right before Christmas, it was announced that Zara had miscarried. So, what was suppose to be a very happy letter about family and children, is actually kind of sad 3 months latter when Jennifer is reading it.

The reply also mentions my well-wishes for the Queen's Sapphire Jubilee which happened in January. I had mentioned that very briefing in the closing of my letter. I like to end my letters looking towards the future. It always interesting to see how you can mention something in one line at the end and that's what they had respond to. I had also talked about the repairs to Buckingham Palace & the passing of the Queen's cousin Margaret Rhodes in my letter.

Normally I would expect a Christmas reply to come much earlier, sometime in January or February, but the Queen's office has been very busy lately. They received a lot of mail for the Queen's 90th Birthday in April & June and I know they were still sending out replies for that in November. So they had a late start on Christmas and it took a while. And now I'm sure they are busy with the Queen's Sapphire Jubilee, then the Queen Birthday, and The Queen & Philip's 70th wedding anniversary later this year. So, I would definitely not worry if your letter to the Queen take longer than the usual 1-2 months to get a reply.

Back to Replies - Main Page
Posted by Gert's Royals at 3:46 AM