A lovely reply arrived today from the UK. I had written to Prince Philip in June to wish him a happy 99th birthday. This response came a little later than most of Prince Philip's past birthday reply, but understandable due to the pandemic.
The front of the envelope is the usual from the British Royals. 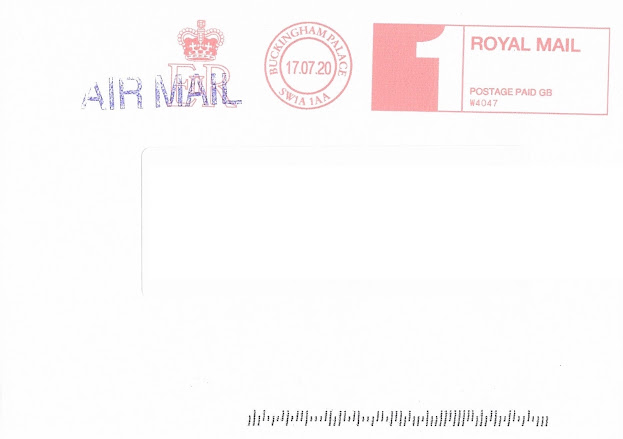 The back of the envelope feature's Prince Philip's badge. 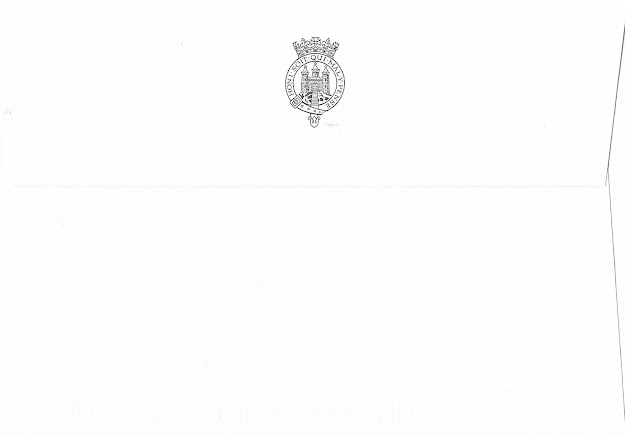 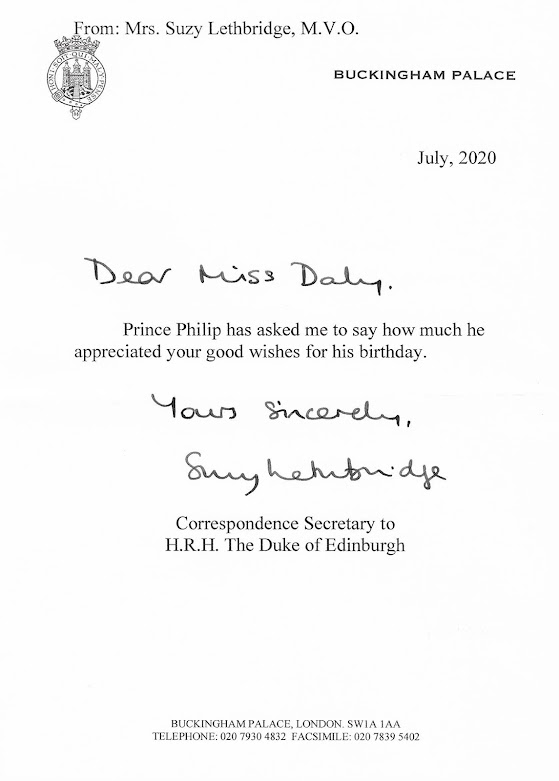 Prince Philip has asked me to say how much he appreciated your good wishes for his birthday.
Your Sincerely,
Suzy Lethbridge

Correspondence Secretary to H.R.H. The Duke of Edinburgh

Prince Philip's office sends out the same letter to everyone who writes for an occasion. This is why only the month and year is given for the date and there is nothing printed on the letter personalizing this to me.  However, this is the first birthday reply I have gotten from Prince Philip that has "Dear Miss Daly" written in.  It's only a little thing, but it is nice to have that personalization.
I do wonder why the change now, after years of not personalizing the letter? I know from experience that the more overwhelmed an office is by mail the less personalized they tend to be. So, could it be they have more time on their hands? Less mail than past years?
Back to Replies - Main Page
Posted by Gert's Royals at 4:39 PM

A lovely reply arrived today from Denmark. I had written to Queen Margrethe for her 80th birthday in April. The response time is about 3.5 months, which is the longest response times I've gotten from the Queen Margrethe. But, not unexpected with the current pandemic.
The front of the envelope is the usual from Queen Margrethe. The Postmark has the Royal Crown over Amalienborg, the main Danish Palace where her mail is sent from. 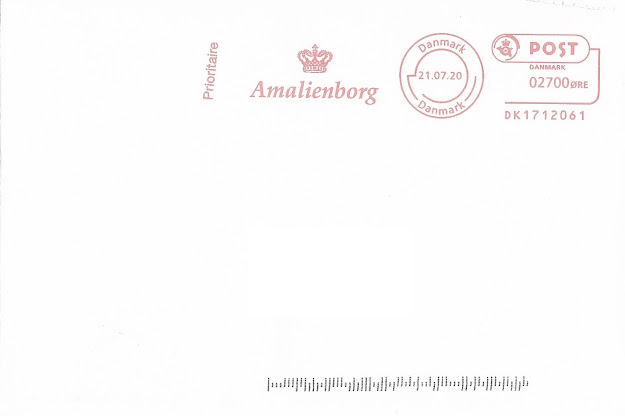 The back of the envelope features the Royal Crown of Denmark. The envelope paper has a lovely edge, which you can sort of see. 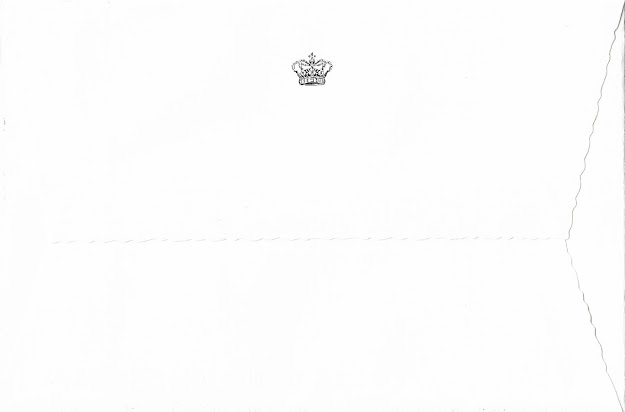 Inside is a letter from one of Queen Margrethe's Aides-de-camp.  The Denmark royals don't usually do special replies for milestone events. So, I was expecting something similar to her part replies, which is what I got. This letter is almost identical to Queen Margrethe's past birthday. But, the one change they did make, is this mentions that this is her 80th birthday.
The paper has a lovely textured edge. 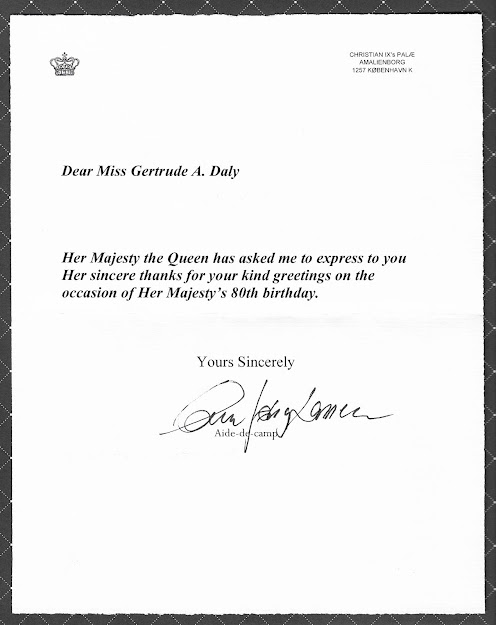 Her Majesty the Queen has asked me to express to you Her sincere thanks for your kind greetings on the occasion of Her Majesty's 80th birthday.

Back to Replies - Main Page
Posted by Gert's Royals at 2:50 PM

A lovely reply arrived today from Belgium. I had written to King Albert last month to wish him a happy birthday.
The Belgium Royals have a number of different envelopes that they use. This version is the most common for King Albert & Queen Paola, with a purple crown and Belvédère [Castle], the name of their home, on the front.
What is unusual however is my address is handwritten on the envelope. I have gotten a number of replies over the years with handwritten envelopes, but this is the first time from Belgium. 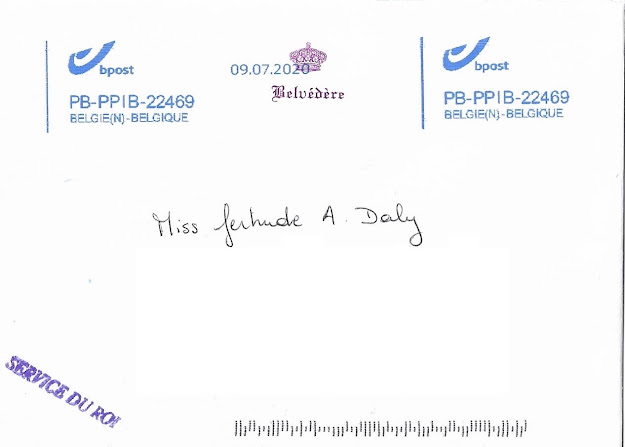 Inside is a flat card, similar to past birthday replies. 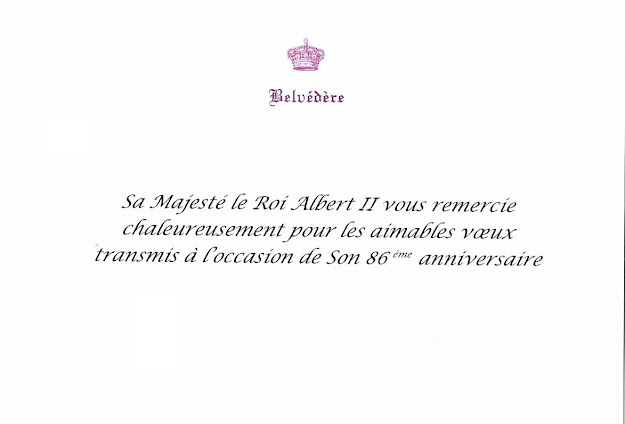 His Majesty King Albert II warmly thanks you for the kind wishes sent on the occasion of His 86th birthday.

Back to Replies - Main Page
Posted by Gert's Royals at 1:34 PM

A lovely reply arrived today from Monaco. I had written to Prince Albert to send him and his family my deepest condolences on the passing of his cousin Elizabeth de Massy last month.
The envelope is the usual from the Monaco Royals. Although this features no monogram. The postmark says, in French, "Women’s Rights Committee, the Prince’s Government, Promotion and Protection." The Monaco Post Service has lovely postmarks. They usually rotate every week between a special postmark for an event and their standard postmarks. This postmark would have been stamped on all the mail sent in Monaco at that time. 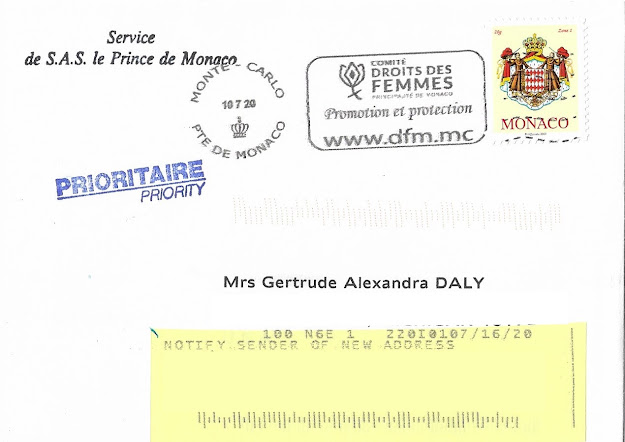 As I said previously, I moved in March. I had written my letter of condolence using my new address. But what is interesting is this was sent to my old address. The Monaco Royals store addresses of people who write in a database. (Other monarchies do this as well.) And so, when replying had pulled my old address off their database.
This isn't surprising since the same thing happened last time I moved. Some monarchies note the address change right away, others take a while. My strategy has just been to include in green "New Address" on my envelope.
Inside is a flat card, with a printed message. The card features a black border for mourning. 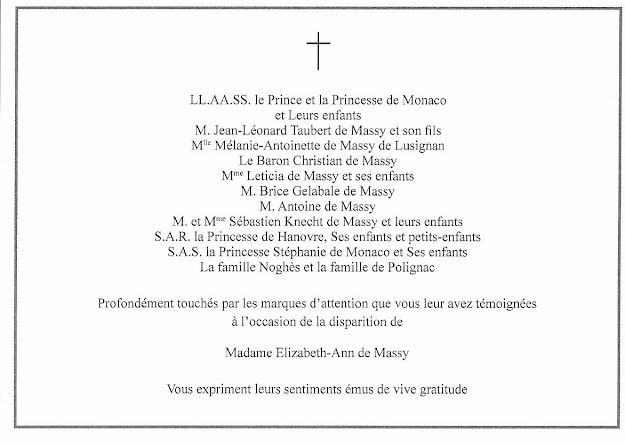 The card translates to:
TSH The Prince and Princess of Monaco
and their children
Mr. Jean-Léonard Taubert de Massey and his son
Miss Mélanie-Antoinette de Massy de Lusignan
Baron Christian de Massy
Mrs. Leticia de Massy and her children
Mr. Brice Gelable de Massy
Mr and Mrs. Sébastien Knecht de Massy and their children
HRH The Princess of Hanover, her children and grandchildren
HSH Princess Stéphanie of Monaco and her children
The Noghes family and the Polignac family
Deeply touched by the kind attention that you showed them following the passing of
Mrs Elizabeth-Ann de Massy
They express their feelings of deep gratitude
The people listed on the card are Elizabeth's family. Prince Albert, Princess Charlene and their children are listed first, and then the rest are listed based on their relationship to Elizabeth.
Children:
Mr. Jean-Léonard Taubert de Massey
Miss Mélanie-Antoinette de Massy de Lusignan
Siblings:
Baron Christian de Massy
Nieces & Nephews:
Mrs. Leticia de Massy
Mr. Brice Gelable de Massy
Mr. Sébastien Knecht de Massy
Cousins:
Prince Albert, Princess Charlene, Princess Stephanie, Princess Caroline
Extended Family:
Noghès Family
Polignac Family
---
This reply came fairly quickly, just over a month since I wrote.
Each monarchy is making their own decisions about how to handle mail during the pandemic. But in general, things have been slower than usual. This is my first reply in over a month.
I would be prepared for long response times.
Back to Replies - Main Page
Posted by Gert's Royals at 2:22 PM