I received this letter in the mail yesterday. I had written to Queen Elizabeth for her 89th Birthday. The letter was written by one of her Lady-in-Waiting, Mary Morrison, and looks very similar to other letters I've received from Queen Elizabeth.  The letter also thanks me for sending best wishes on the then-upcoming birth of Princess Charlotte of Cambridge, who was born May 2nd.
(Princess Charlotte was 4 days old when this letter was written.) 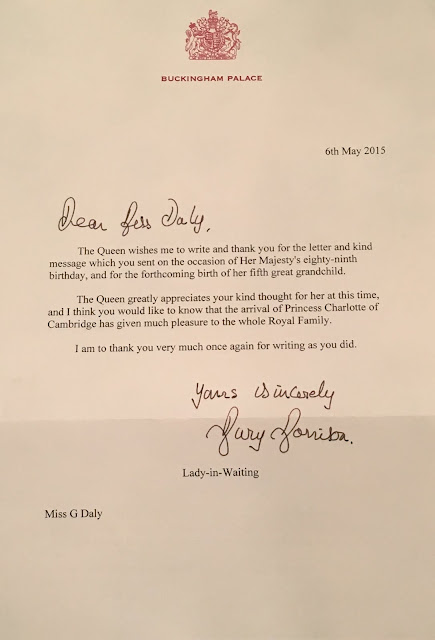 Dear Miss Daly,
The Queen wishes me to write and thank you for the letter and kind message which you sent on the occasion of Her Majesty's eighty-ninth birthday, and for the forthcoming birth of her fifth great grandchild.

The Queen greatly appreciates your kind thought for her at this time, and I think you would like to know that the arrival of Princess Charlotte of Cambridge has given much pleasure to the whole Royal Family.

I am to thank you very much once again for writing as you did.

Back to Replies - Main Page
Posted by Gert's Royals at 5:47 PM

A lovely reply arrived from the UK. This letter is one of the most exciting I've received so far. Usually, when you write to Prince Harry for a certain occasion they reply back with a postcard-sized photo with a printed message on the back.

I wrote to Prince Harry, after the announcement that he would be leaving the Armed Forces after 10 years of service, to congratulate him on his hard work and to wish him the best of luck for the future.

Today, on the day Princess Charlotte of Cambridge was born, I received this reply. This is the first actually letter I have received from Kensington Palace. (As Harry's mail is usually answered by the Correspondence Section at Clarence House.) The letter was written by Harry's Private Secretary, Edward Lane Fox. It's quite brief, but really exciting because it is a real letter.

As you can also see, the body of the letter was very carefully placed between the two folds. 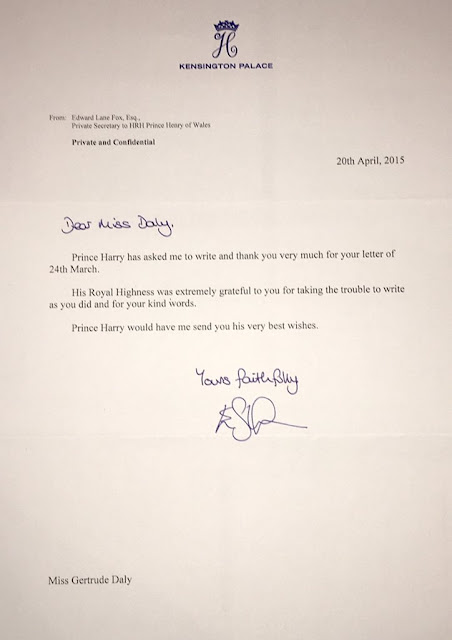 Prince Harry has asked me to write and thank you very much for your letter of 24th March.

His Royal Highness was extremely grateful to you for taking the trouble to write as you did and for your kind words.

Prince Harry would have me send you his very best wishes.

Back to Replies - Main Page
Posted by Gert's Royals at 5:56 AM