I received a reply from Germany today. Prince Richard von Sayn-Wittgenstein-Berleburg passed away in March at age 82. I had written to his family, to express my condolences.

Prince Richard was married to Princess Benedikte of Denmark (Queen Margrethe's sister). So, he was both an extended member of the Denmark Royal Family, as well as the head of Royal Family of the former monarchy of Sayn-Wittgenstein-Berleburg.

This is the first reply I have gotten from a former monarchy. Although I will file it under Denmark in my collection. 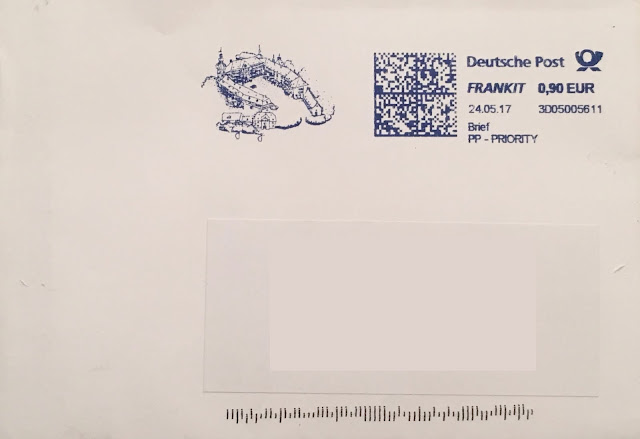 The envelope features a picture of the Castle of Berleburg, which is the family's residence. Prince Richard passed away at the castle, and his funeral was held at the castle church.

The reply is a lovely tri-fold card. 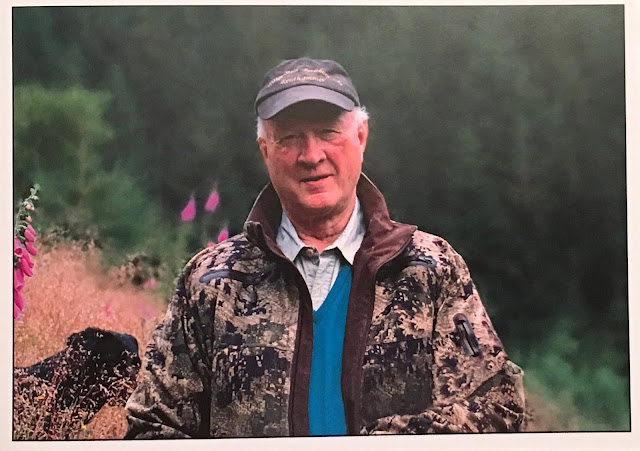 The front of the card features a lovely picture of Richard. The picture was taken in the forest near the family home. 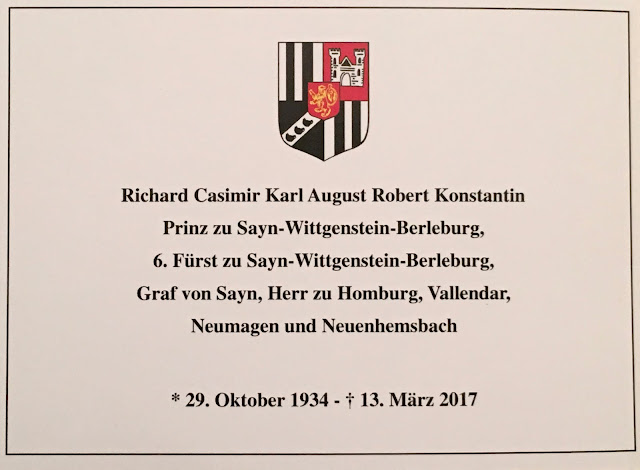 The back of the card features Prince Richard's coat of arms, date of birth & death, and his full name:

The inside has a message from his wife and children in 3 languages: English, German and Danish. 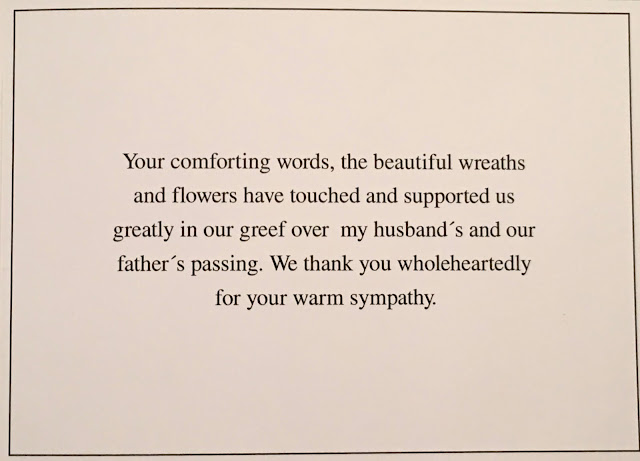 Your comforting words, the beautifal wreaths and flowers have touched and supported us greately in our [grief] over my husband's and or father's passing. We thank you wholeheartedly for your warm sympathy. 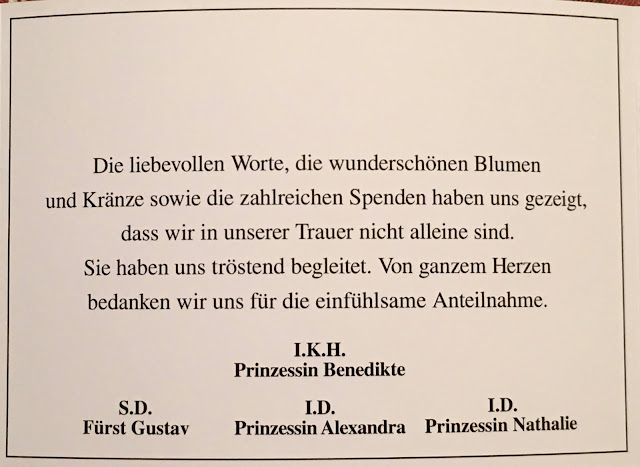 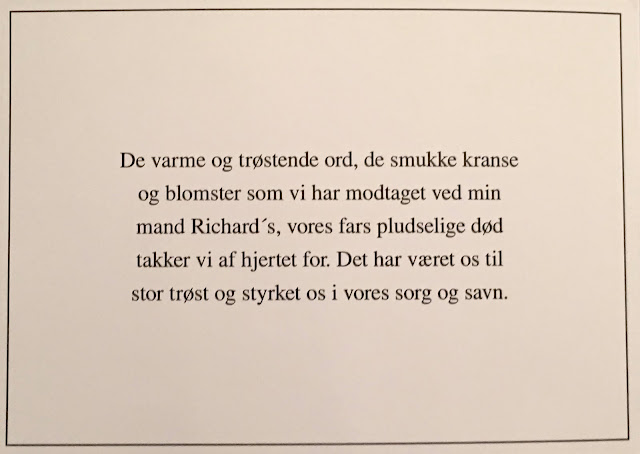 Back to Replies - Main Page
Posted by Gert's Royals at 7:11 AM

The first reply is from Prince William and Duchess Kate. I had written to them in April for Princess Charlotte's 2nd Birthday.

Like usual, Clarence House replied with a photo card of Princess Charlotte with a typed message on the back. As expected, they used the photo taken by Kate, at the family's home Anmer Hall, that was released for Princess Charlotte's birthday. 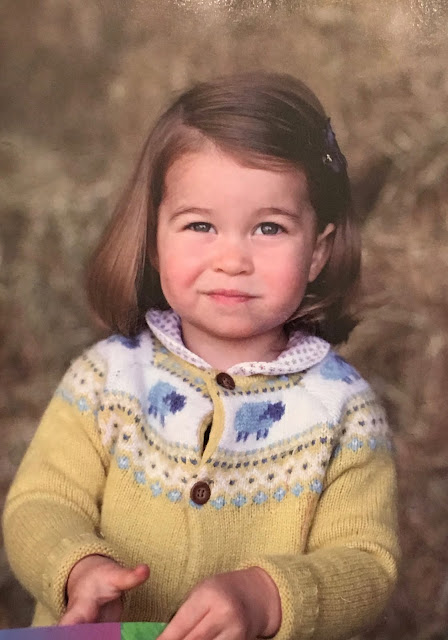 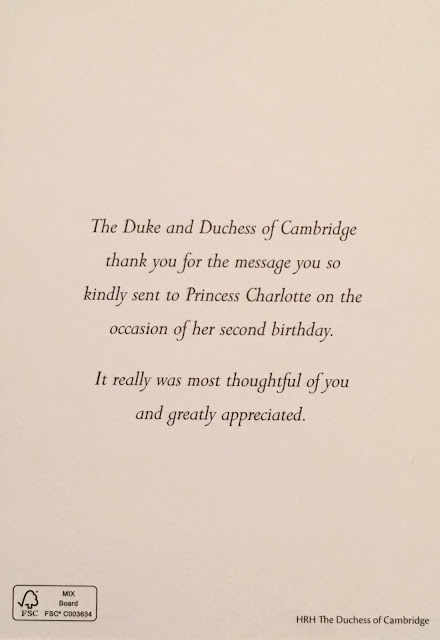 The Duke and Duchess of Cambridge thank you for the message you so kindly sent to Princess Charlotte on the occasion of her second birthday.
It really was most thoughtful of you and greatly appreciated.

With the card, I also received a lovely letter from Claudia Spens, Head of Clarence House's Communications Section. She thanked me for writing and briefly touched on some of the other things I had mentioned in my letter. 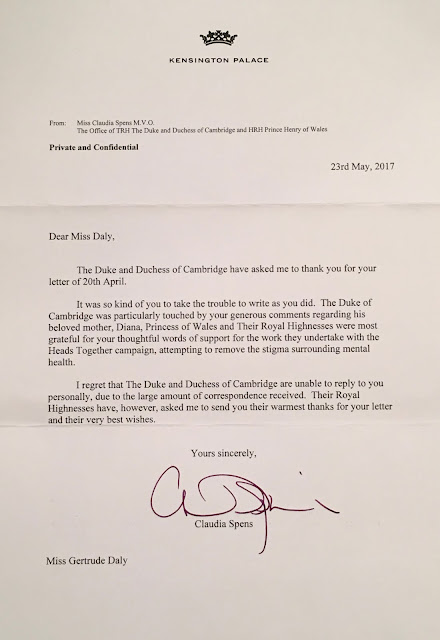 The Duke and Duchess of Cambridge have asked me to thank you for your letter of 20th April.

It was so kind of you to take the trouble to write as you did. The Duke of Cambridge was particularly touched by your generous comments regarding his beloved mother, Diana, Princess of Wales and Their Royal Highnesses were most grateful for your thoughtful words of support for the work they undertake with the Heads Together Campaign,  attempting to remove the stigma surrounding mental health.
I regret that The Duke and Duchess of Cambridge are unable to reply to you personally, due to the large amount of correspondence received. Their Royal Highnesses have, however, asked me to send you their warmest thanks for you letter and their very best wishes.
Yours Sincerely,

A lovely reply from Queen Elizabeth. I had written to her in April for her 91st Birthday. I had of course also mentioned the recent Westminster attack. 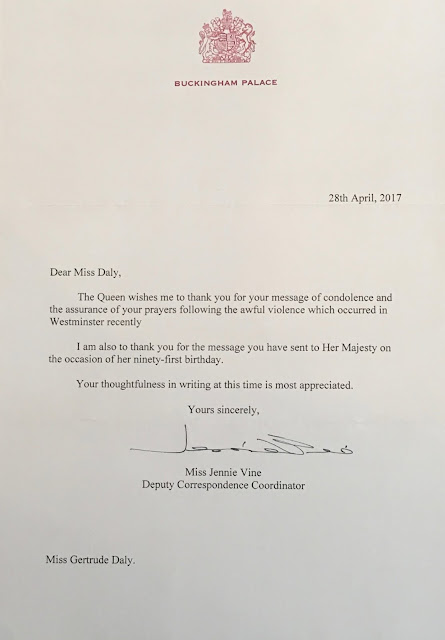 Dear Miss Daly,
The Queen wishes me to than you for your message of condolence and the assurance of your prayers following the awful violence which occurred in Westminster recently.
I am also to thank you for the message you have sent to Her Majesty on the occasion of her ninety-first birthday.
Your thoughtfulness in writing at this time is most appreciated.
Yours sincerely,
Miss Jennie Vine
Deputy Correspondence Coordinator

The letter is similar to the one's I have received from the Queen in the past. But what is interesting is this was written by Miss Jennie Vine, a Deputy Correspondence Coordinator at Buckingham Palace. This is the 1st time I've gotten a letter from the Queen that was signed by someone other than a Lady-in-Waiting.
I think the Ladies-in-Waiting handle more of the good wishes and the correspondence office staff the more serious or official letters. The correspondence office staff do the more day-to-day stuff, as they are working full-time at answering letters. For the Ladies-in-Waiting answering, letters is one of the many tasks they do for the Queen.
Back to Replies - Main Page
Posted by Gert's Royals at 6:59 PM