A lovely reply arrived last month for the Christmas wishes I sent to the Sussexes. Sorry for the delay in posting. I moved, and so things have been hectic and this was originally sent to my old address.

This is likely the last reply I am going to receive for Christmas 2019. I got 17 Christmas replies this year, which is one less than the last 3 years.

The front of the envelope is usual from the British Royals, and features the postmark from the Court Post Office at Buckingham Palace. 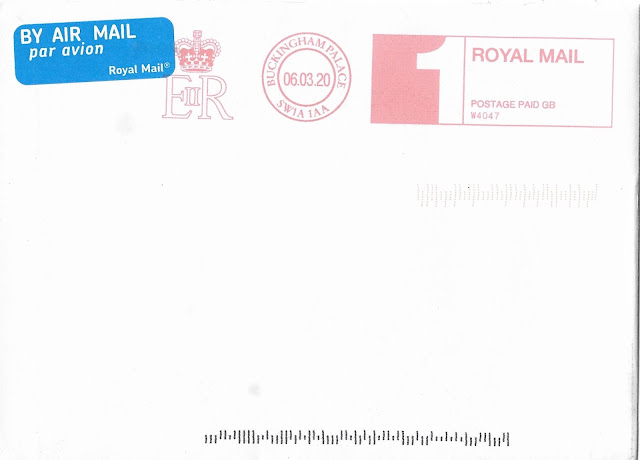 The back of the envelope features the Blue Crown with H&M monogram that the couple started using on their mail for well-wishers last year. 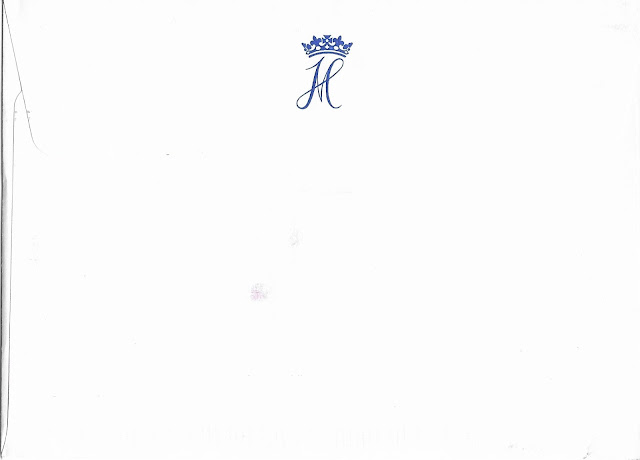 Inside is a new version of the usual "Photo card," except this doesn't feature a photo. This is the Sussexes's 4th version of their photocard in recent years.

The front of the card features the Sussexes's join monogram, an H&M under the coronet of the child of the Heir Apparent. This coronet is used on both the Sussexes & Cambridges coat of arms. 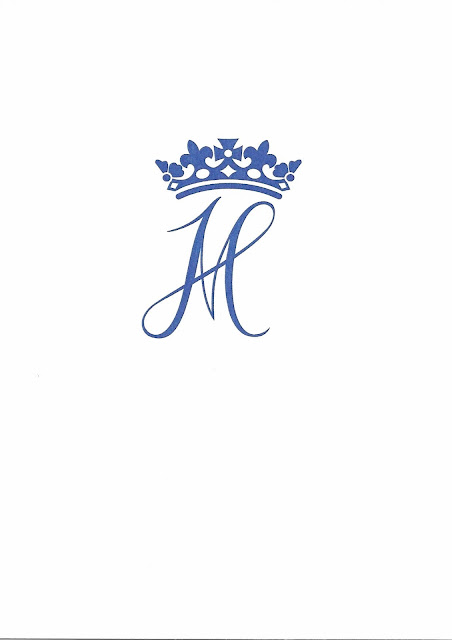 The message is pretty generic and doesn't mention Christmas specifically. This was either done because of the long delay in printing the cards, due to the redesign & The Sussexes being out of the country or to allow the cards to be used for none Christmas related events. 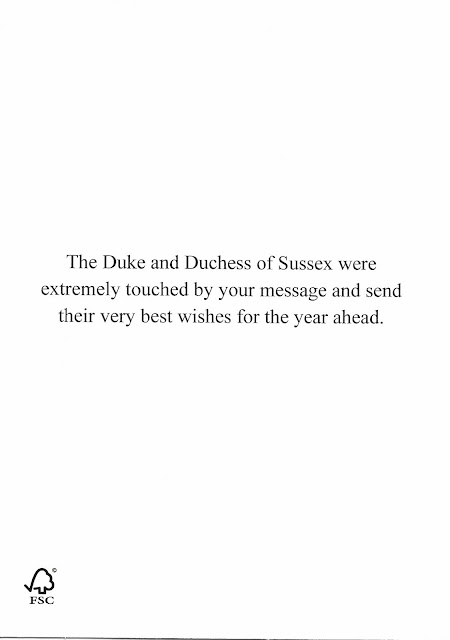 The Duke and Duchess of Sussex were extremely touched by your message and send their very best wishes for the year ahead.

The message is interesting. The message on the photocards is usually two sentences. The first sentence has their title and thanks to you for writing for that occasion. The 2nd sentence usually extends "His/Her/Their Royal Highness/es" best wishes to you. So, it looks like they combined the two sentences in one to avoid using "Their Royal Highness," as the couple agreed to stop using that.

It is also a little sad to see that Archie was not included in the Christmas message like the Cambridges do with their kids.

The Sussexes mail has always been and will continue to be answered by the Correspondence Section at Clarence House. (I will update you if/when that changes.) I have gotten a lot of questions over the last few months about how things are going to change, now that the Sussexes are stepping down. We know Clarence House is still handling their mail and will do so for the foreseeable future. And in that respect I expect things to continue a lot like they have, as that is just easiest for Clarence House.  (But we have to wait and see.)

I wouldn't be surprised if we see this Monogram on Front redesign continues for the Sussexes. Clarence House has gone through a number of cost-cutting measures over the last few years. And removing the photo from the front of the card and the glossy finish saves a significant amount of ink/money.

Clarence House has also gotten more selective about what it replies to. They decided last year to stop replying for unimportant wedding anniversaries and other insignificant things people write for. The reason is because they received HUGE increases in mail.

They had to draw the line as some people were writing a dozen times a year to each royal for every little thing they could think of. So, I would expect replies for Christmas, Birthdays, Milestone Anniversaries and other significant life events. But, you may not get a reply for Easter, Mother's Day, Father's Day, Trooping the Colours, New patronage, New project, etc.

Back to Replies - Main Page
Posted by Gert's Royals at 1:09 PM

This lovely reply arrived back in mid-March. I am sorry for the delay in posting it. I moved at the beginning of March and this was sent to my old address. So, it took a while for this to actually get to me. And then with the hecticness of everything, it just got put safely away in my binders.

I had written to Duchess Kate in January to wish her a happy birthday. The front of the envelope is the usual from the British Royals. 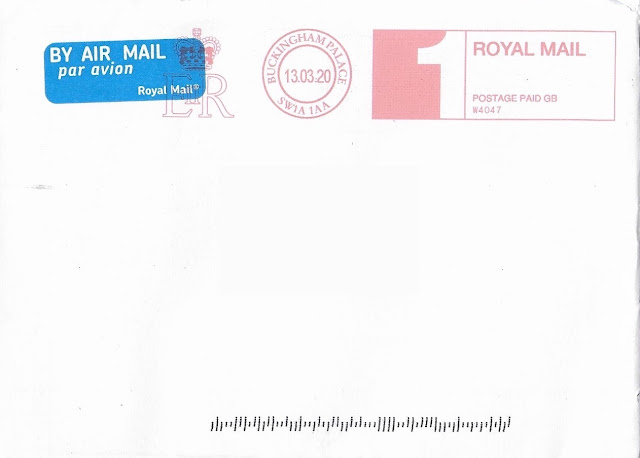 The back of the envelope features the usual black Crown/Kensington Palace that the Cambridges have been using for years. 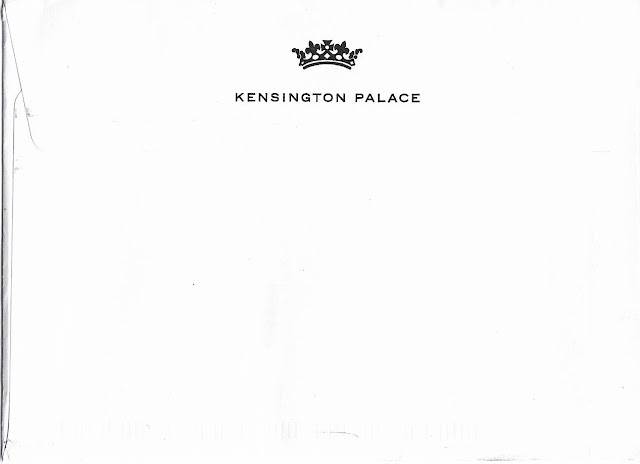 Inside is something that is a little different than what I've gotten in the past. It is the usual photocard, with no message on the back. Instead, there is a piece of paper included with the message. This is the first time I've gotten this kind of reply from Clarence House, but I have seen others get this in the past.

Clarence House keeps a set of cards with blank backs that it can use for a variety of purposes. When Clarence House runs out of cards with the typed message for an event, we will sometimes see them do this, where they send a blank card and the message written on a separate note.

The front of the card features a photo of Duchess Kate taken at Amner Hall by Matt Porteous. This photo was released to mark Duchess Kate's birthday this year. And it was the 1st time the Palace has released a new photo to mark Kate's birthday. The photo appears to be taken at the same time as The Cambridge's 2018 Personal Christmas Card photo. 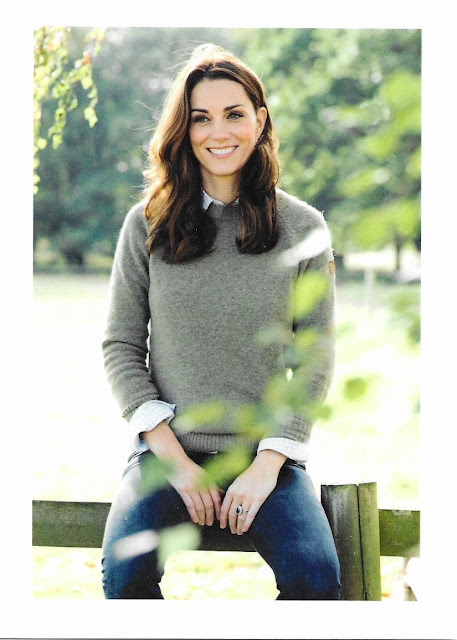 The back of the card has no typed message but still features the usual Black Crown Kensington Palace, along with the FSC (Forest Stewardship Council) mark indicating this paper came from a sustainable forest and the photographer's name. 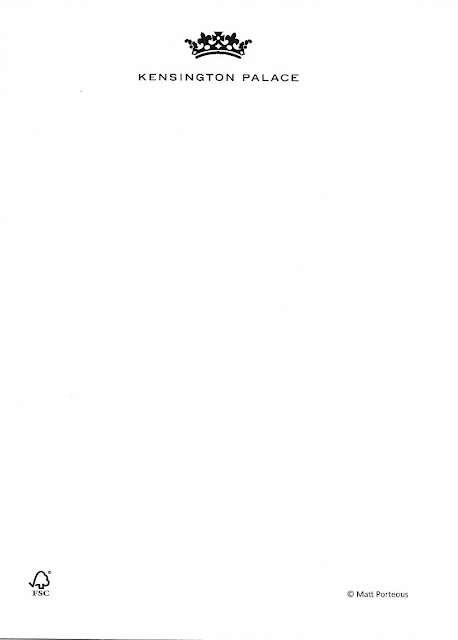 With the card is a letter written on A5 size paper, which is double the size of the card (A6) and half the size of normal letter paper (A4). 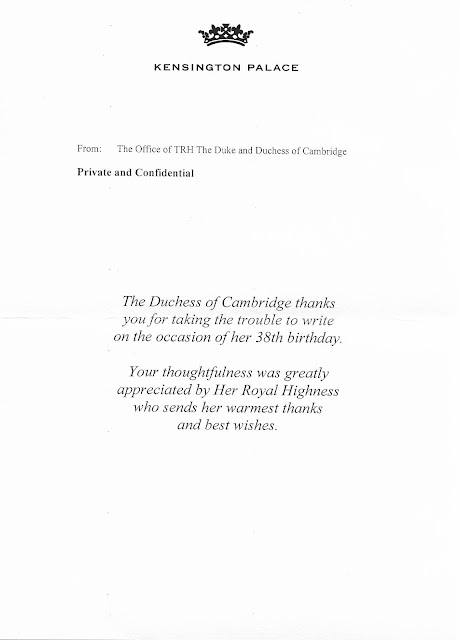 The body of the letter is the exact same as the one printed on the card for Kate's birthday this year. The letter reads:

From: The Office of TRH The Duke and Duchess of CambridgePrivate and Confidential


The Duchess of Cambridge thanks you for taking the trouble to write on the occasion of her 38th Birthday.

Your thoughtfulness was greatly appreciated by Her Royal Highness who sends he warmest thanks and best wishes.