A reply arrived today from the UK.

Theis reply was quite a surprise. I was a bit confused when I saw the envelope. It was obviously from the UK, but it doesn't have the typical marking of a royal letter. It is just a simple envelope with a stamp of the Queen, a handwritten address, and nothing on the back. I wondered who it could be from.Given that the letter isn't stamped with the Royal's PPI (Printed Postage Impression), I knew it couldn't be one of the Royal Households. The last time I received an envelope like this it was from a Foreign Royal living in the UK.

To my surprise, the reply is from Zara Tindall for the letter I sent her & Mike congratulating them on their pregnancy. When I wrote to them in January, I wasn't expecting a reply. I don't think I've ever seen a reply from Zara before. I wasn't even entirely sure Princess Anne's office passed on letters to her children. I have written to Zara twice before for her previous pregnancy announcement, and miscarriage. 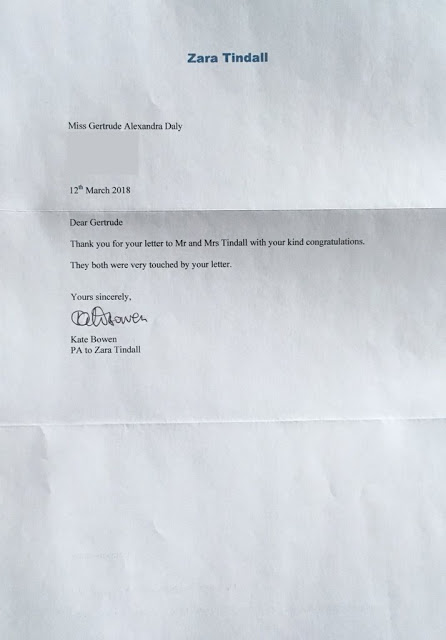 The reply is a simple letter, written by Kate Bowen, Zara's Personal Assistant. The letter says:

Thank you for your letter to Mr and Mrs Tindall with your kind congratulations. They both were very touched by your letter.

Today I received a reply from the Queen, for the Christmas letter I sent her and Prince Philip. The reply is a basic form letter. 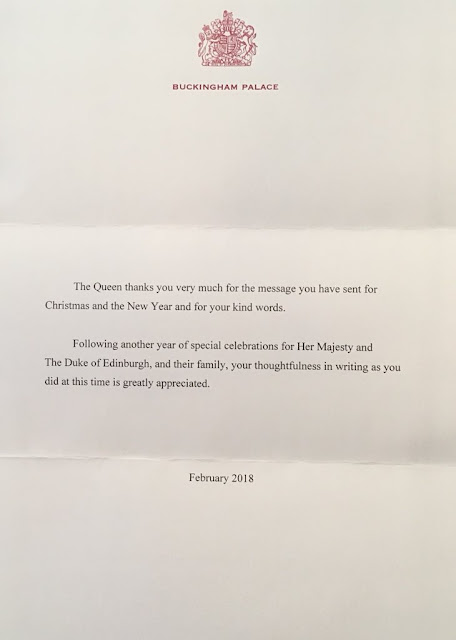 The letter reads:
The Queen thanks you very much for the message you have sent for Christmas and the New Year and for your kind words.

Following another year of special celebration for Her Majesty and the Duke of Edinburgh, and their family, your thoughtfulness in writing as you did at this time is greatly appreciated.

Back to Replies - Main Page
Posted by Gert's Royals at 4:35 AM

A lovely reply arrived today from Spain. I had written to King Felipe in January for his 50th Birthday. This is only the 2nd reply I've gotten from King Felipe over the years and the 1st letter. The letter is similar to those I received from King Juan Carlos & Queen Sofia. 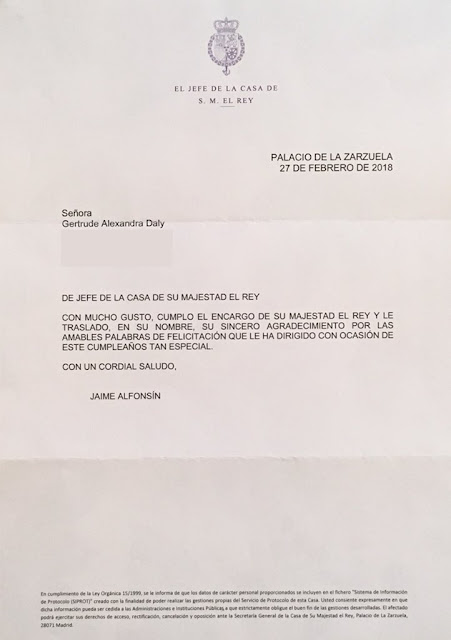 Head of The House of HM the King

Head of The House of HM the King

With much pleasure, I on behalf of His Majesty the King convey to you, in his name, his sincere gratitude for the kind words of congratulations addressed to him on the occasion of this special birthday.

At the bottom of the letter is a privacy statement, basically saying they are keeping your personal data on file. Translated the statement reads:
In compliance with Organic Law 15/1999, you are informed that the personal data provided are included in the file "Protocol Information System (SIPROT)," the purpose of which is to carry out the functions of the protocol of this house. You expressly consent that such information may be transferred to the administrations and public institutions to which strictly enforces the successful completion of the procedures developed. You may exercise your right of access, reification, cancellation, and opposition before the General Secretary of the Household of His Majesty the King, Palace of Zarzulea,  28017 Madrid.

This is the first time I've seen a statement like this on the bottom of the letter. Although I know a lot of the Royal Houses have databases when they keep some information about the people who wrote. (And they have a privacy statement on their official website.)

Back to Replies - Main Page
Posted by Gert's Royals at 4:33 AM

Today, I received a letter from the UK, for the Christmas letter I sent the Cambridges. The Cambridges replied with a letter, written by Claudia Spens, head of the correspondence section at Clarence House. 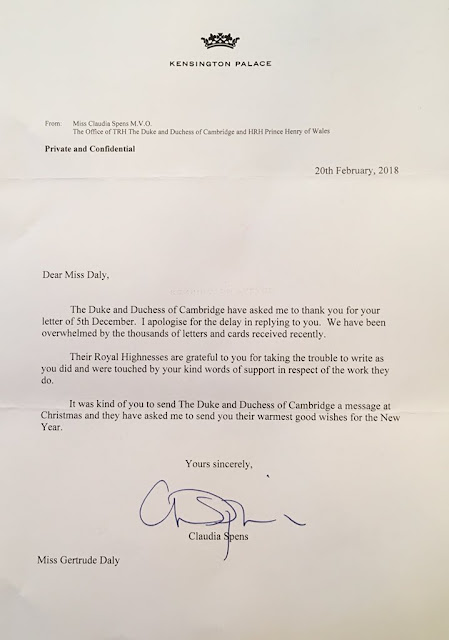 The Duke and Duchess of Cambridge have asked me to thank you for your letter of 5th December. I apologise for the delay in replying to you. We have been overwhelmed by the thousands of letters and cards received recently.

Their Royal Highnesses are grateful to you for taking the trouble to write as you did and were touched by your kind words of support in respect of the work they do.

It was kind of you to send The Duke and Duchess of Cambridge a message at Christmas and they have asked me to send you their warmest good wishes for the New Year.

While I always love getting a personal letter, I would have loved to get their Christmas photo card.

Back to Replies - Main Page
Posted by Gert's Royals at 4:18 AM