A lovely and a bit surprising reply arrived from the UK earlier this month. I had written to Duchess Sarah for Christmas and of course expressed my congratulations on the engagement of her daughter, Princess Beatrice to Edo.

I received a lovely Christmas reply from Sarah back in January. And I wasn't expecting anything more. So, this was a nice surprise.

The front of the envelope will look a little different than the usual from the British Royals. There is no EIIR, but from the postmark, we can tell this was processed through the Court Post Office at Windsor Castle. And the PPI Number, W4047 tells us that this was changed to the Royal's Postal account which is paid for by the Sovereign Grant. 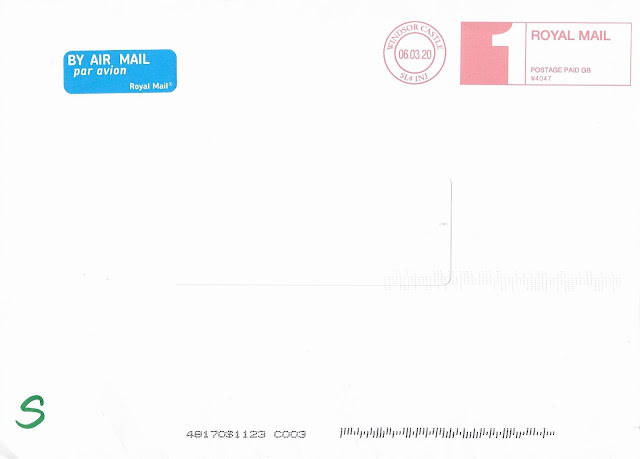 The back of the envelope features Princess Beatrice's monogram engraved in gold. 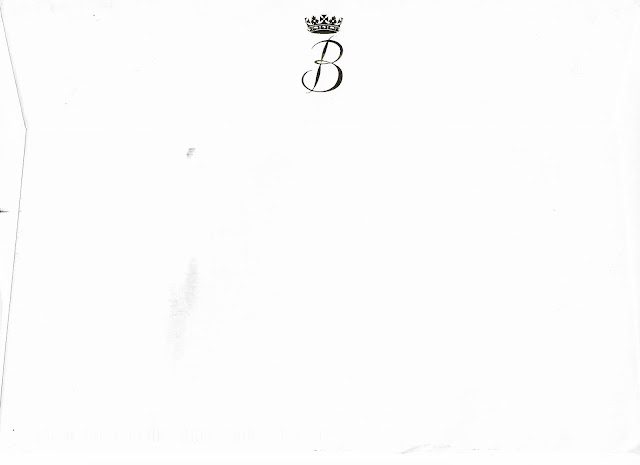 Inside is a flat card. The front of the card features a photo of Princess Beatrice & Edoardo taken by Princess Eugenie. This photo was released to mark the couple's engagement in September. 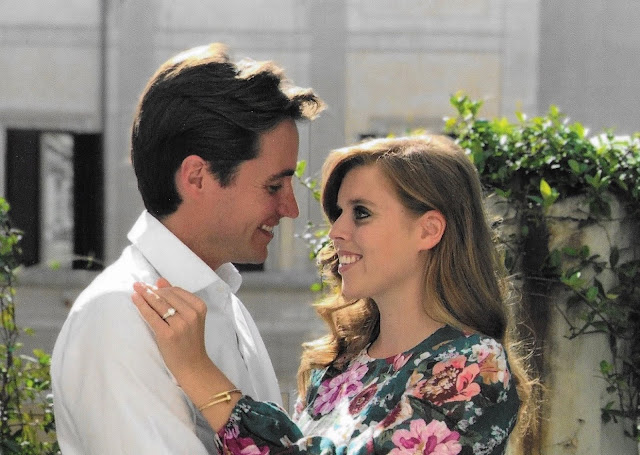 The back of the card feature Sarah's monogram. Sarah does have a usual S with a crown monogram that she has used in the past. The monogram on the card was developed a few years ago as sort of a logo for a brand of tea that Sarah was promoting. The date and signature are printed on. 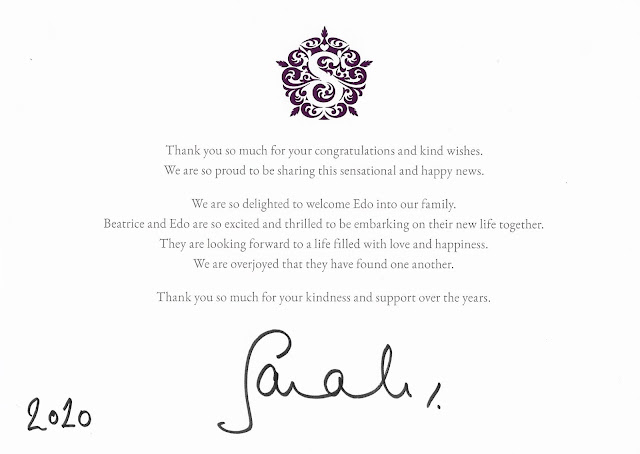 
Thank you so much for your congratulations and kind wishes. We are so proud to be sharing this sensational and happy news.

We are so delighted to welcome Edo into our family. Beatrice and Edo are so excited and thrilled to be embarking on their new life together. They are looking forward to a life filled with love and happiness. We are overjoyed that they have found one another.

Thank you so much for your kindness and support over the years.


This card is actually the same one sent out by Prince Andrew's office for Princess Beatrice's engagement. Sarah's staff just glued her message over Beatrice & Edo's thank you. If you hold the card up to the light you can see Beatrice's Monogram and the printed on message. You can see the full original card here. 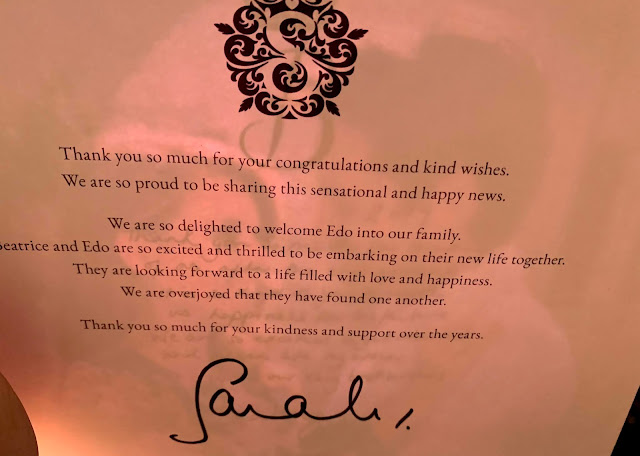 A lovely reply arrived this week from Denmark. I had written to Crown Princess Mary to wish her a happy birthday.

The envelope is the usual for the Denmark Royals. 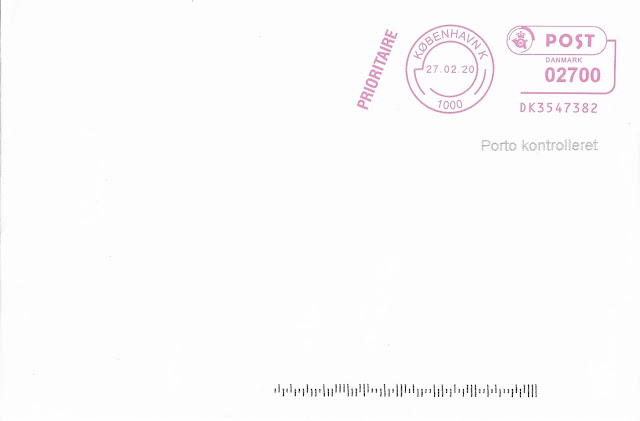 The back of the envelope is usual from the Crown Prince Couple. 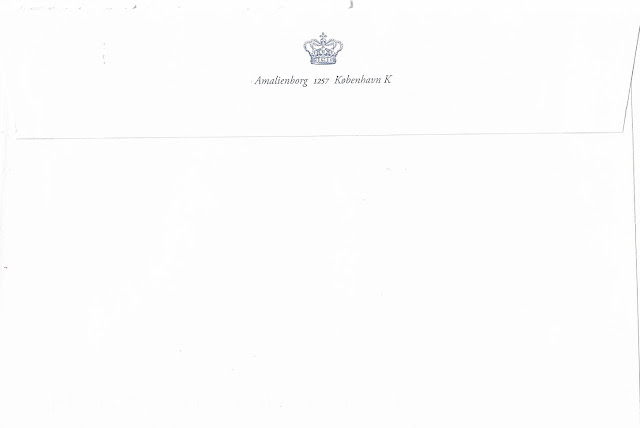 The card has a typed message and is the exact same as last year's birthday reply. The card has lovely textured edges. 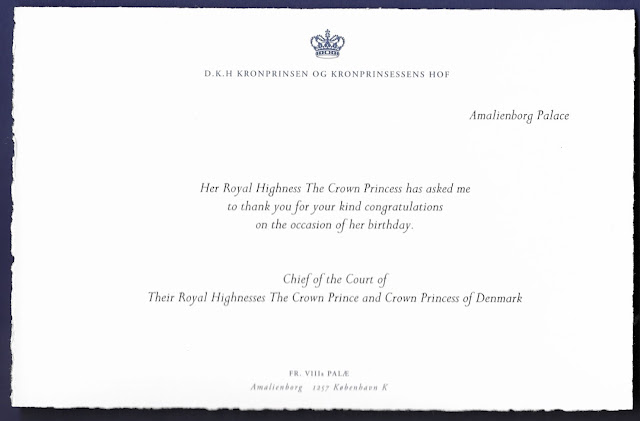 A lovely reply arrived today from Belgium. I had written to Queen Mathilde in January to wish her a happy birthday.

The front of the envelope is the usual from the Belgium Royals. What is interesting, it this has the postmark printed on twice, likely by accident. 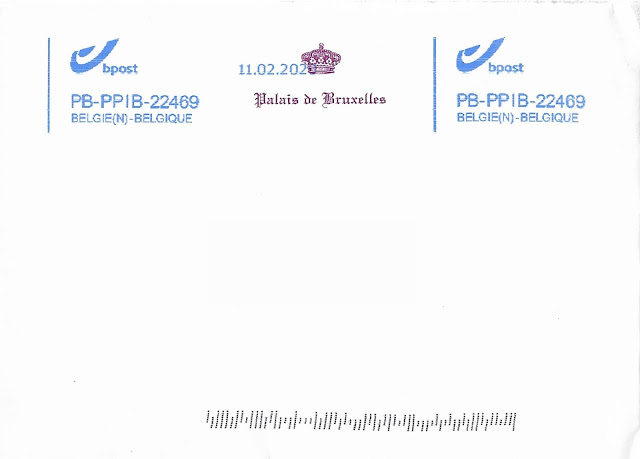 Inside is the usual birthday reply from Queen Mathilde, a photo and a flat card.

No details on the photo, except that, is was released to mark her birthday this year. 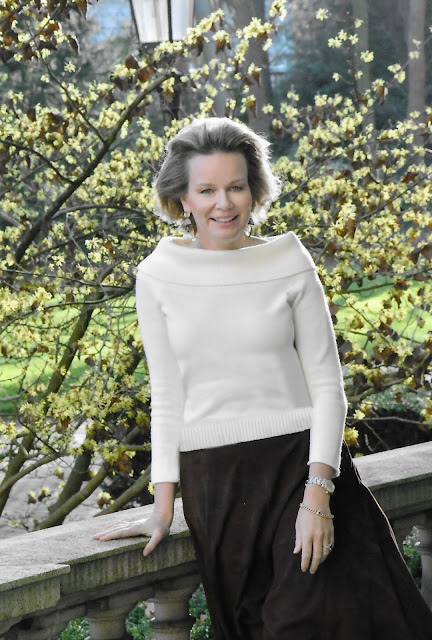 The card's message is pretty similar to last year's, expect the wording is a little different. 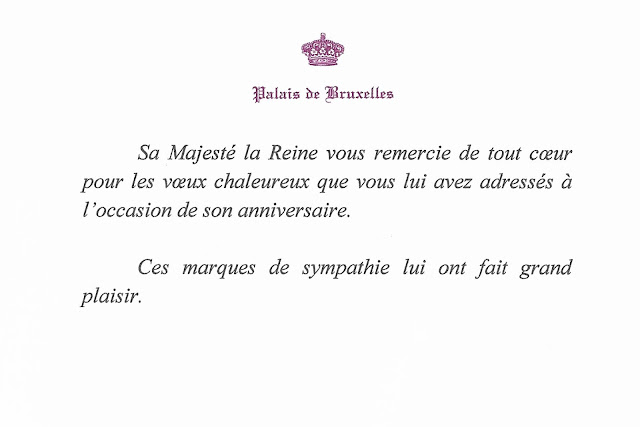 
Her Majesty's The Queen thank you wholeheartedly for the warm wishes you sent her an occasion of her birthday.

These expressions of good wishes made her very happy.

A lovely reply arrived from the UK last week! I had written to The Cambridges to wish them a merry Christmas.

You may notice these photos are much higher quality than my previous posts. I just bought a new printer that has a scanner. So, I will be able to get much better photos of my replies than I could get in the past with my phone.

The front of the envelope is the usual from the British Royals. This envelope features a double postmark. The Red is the usual from the Court Post Office at Buckingham Palace. The black is an accidental postmark that was stamped when the mail arrived at the Mount Pleasant Mail Centre, where most international mail from the London area is sorted before taken to Heathrow Airport. 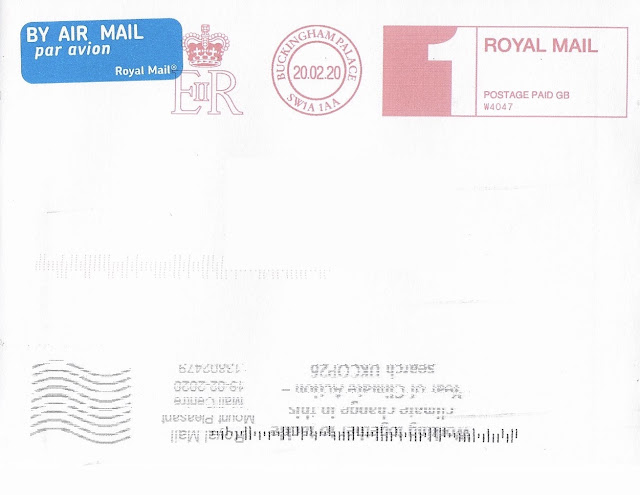 The back of the envelope features the usual Black Crown/Kensington Palace that we see from the Cambridges. 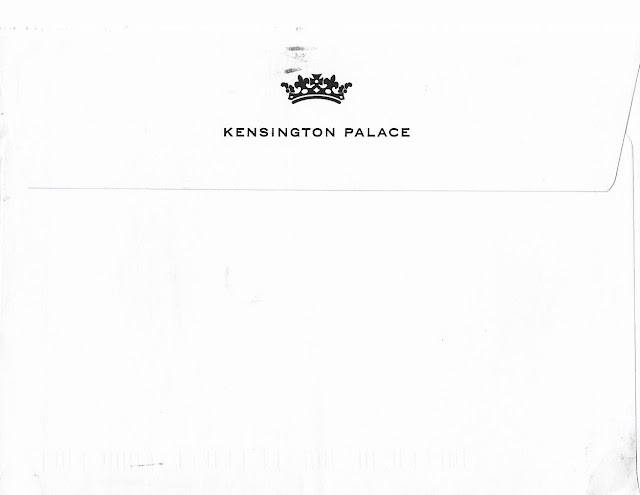 Inside is Clarence House's usual photo card. The front of the card features a lovely photo of the Cambridges that was released for Christmas 2018 and used on their personal Christmas card that Year.  The photo was taken by Matt Porteous at Amner Hall in late 2018. It's not unusual for the Cambridges to use old photos. But, I would have liked something more current, especially given how much Prince Louis has grown. 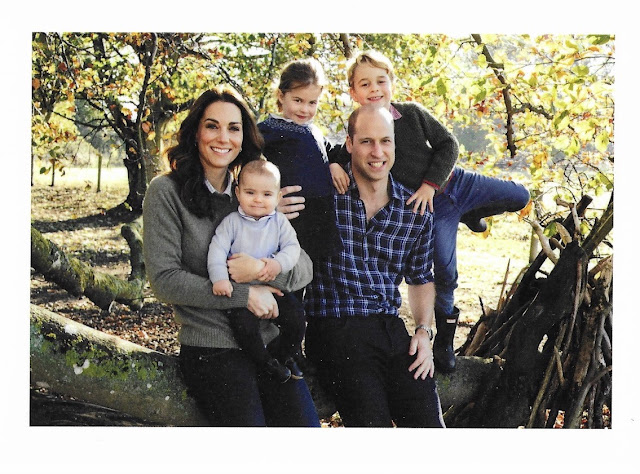 The back of the card features the usual sort of typed message.  It is slightly different than last year's reply. 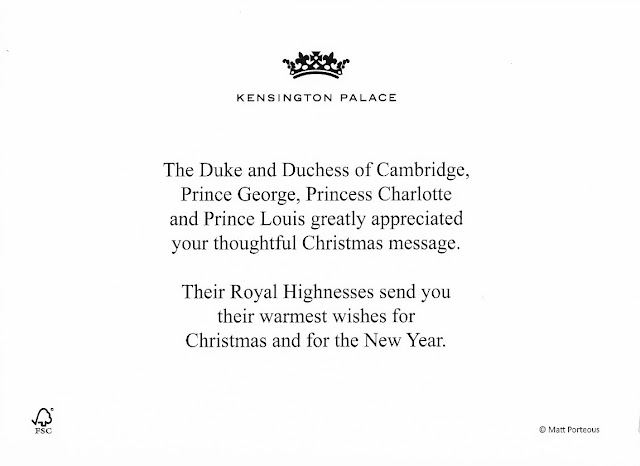 
Their Royal Highnesses send you their warmest wishes for Christmas and for the New Year.

I am hoping for at least one more reply for Christmas 2019.

Back to Replies - Main Page
Posted by Gert's Royals at 5:12 PM