A lovely reply arrived over the weekend from the UK. I had written to Prince William in June for his birthday.

The front of the envelope is the usual from the British royals, featuring the postmark from the court post office at Buckingham Palace. 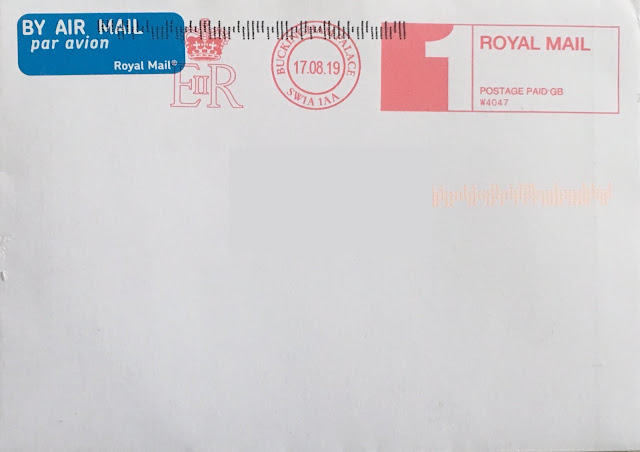 The back of the envelope features the black crown/Kensington Royal that is currently used by the Cambridges. 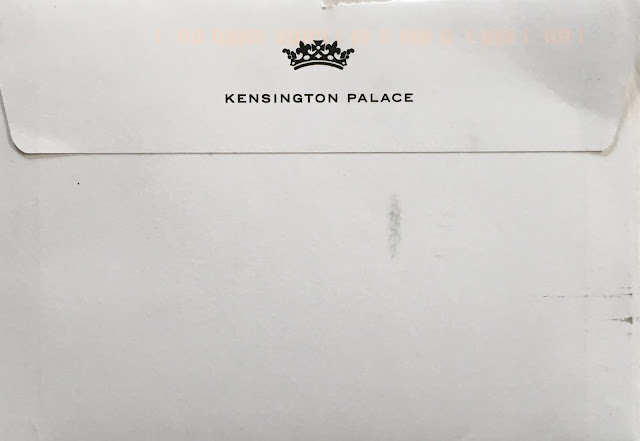 Inside is Clarence House's typical birthday reply, a photo card with a typed message on the back.

The front of the card features a photo of Prince William by Norman-Jean Roy. The photo is from William's 2017 interview with British GQ. You can read the interview here.

This photo was also used on Prince William's 2017 and 2018 birthday replies. It is quite typical for Clarence House to reuse photos for multiple events, especially the adult's birthdays. 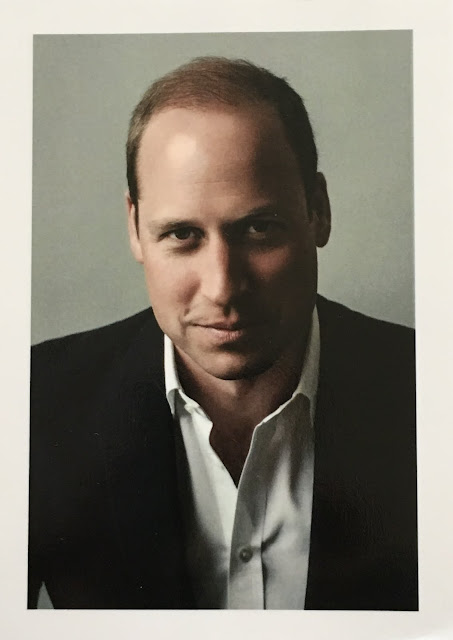 The back of the card features the black/crown Kensington Palace at the top, along with a typed message. The message is slightly different than last years. 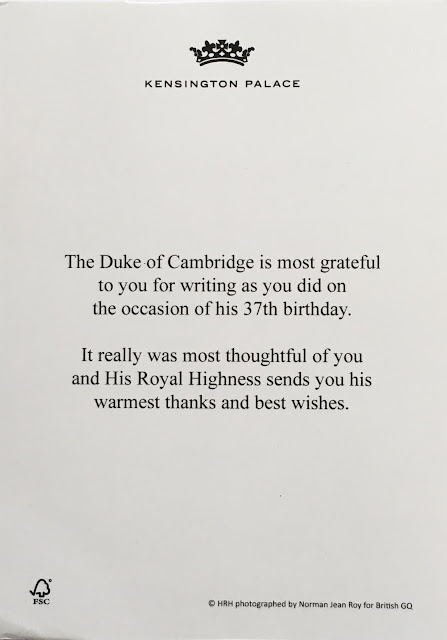 The Duke of Cambridge is most grateful to you for writing as you did on the occasion of his 37th birthday.

A lovely reply arrived today from Denmark. I had written to Prince Joachim in June for his 50th birthday.

I have written to Prince Joachim & his wife, Princess Marie, a number of times over the years. Princess Marie's birthday, earlier this year, was the 1st time I got a reply from them. This is the 2nd.

The envelope is pretty usual from the Danish Royals. The red crown/ Amalienbourg appears on Queen Margrethe & The Prince Couple's envelopes, but not the Crown Prince couples. 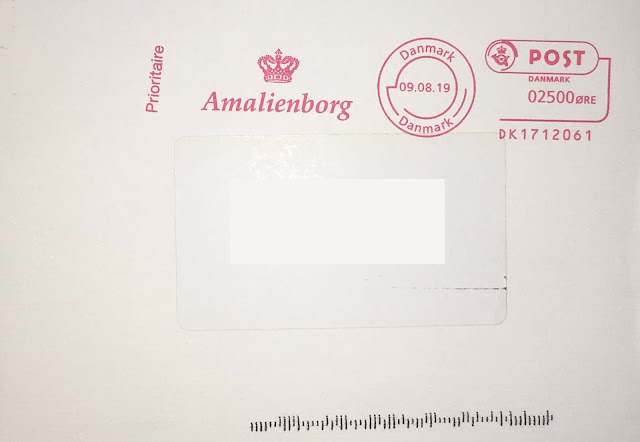 The back of the envelope features a blue crown. This is the Royal Crown of Denmark and is the same one featured on the postmark & card. 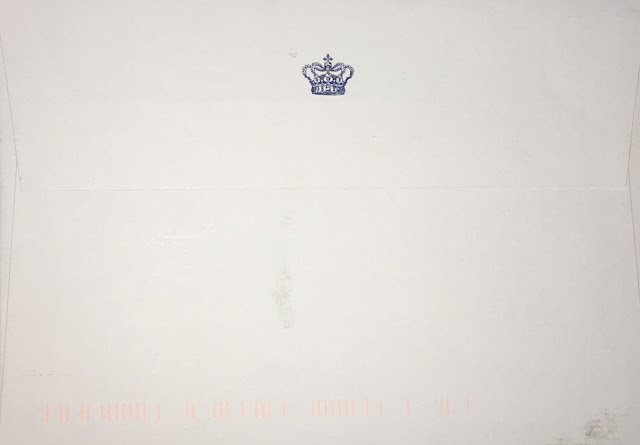 Charles-Henri is officially listed on the Denmark Royal website as a "Funds Secretary" for the Office of Treasury in Queen Margrethe's Household. But since Princess Marie's lady-in-waiting resigned last October, Charles-Henri has been seen accompanying Marie on official engagements. So, it looks like Charles-Henri now has some official role in Joachim & Marie's office. Although, I'm not sure what exactly his position is. 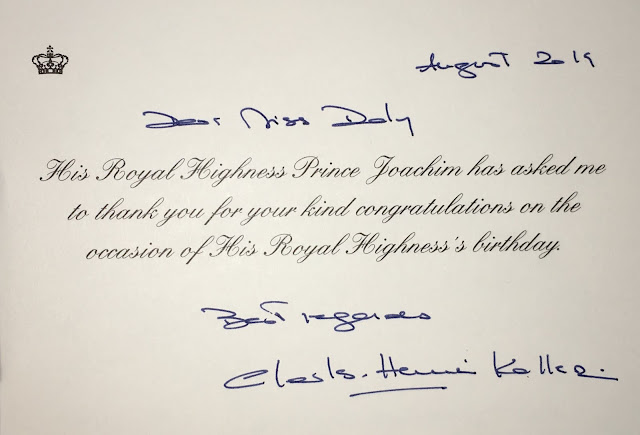 It's not very often that you will get a personalized flat card like this. So, this is especially lovely. And I am always quite excited when they include the date. I think it makes it a little nicer momento, as you can look back years later and know what year this reply was from.

A lovely reply arrived today from the UK. I had written to Duchess Camilla last month to wish her a happy birthday.

The front of the envelope is pretty typical of the British royals, except for the fact that this is a larger envelope. The back of the envelope feature's Camilla's monogram. Since the monogram is blue, we know came from Clarence House. Camilla uses an envelope with green monograms for Birkhall in Scotland, where she is spending her summer break with Prince Charles. 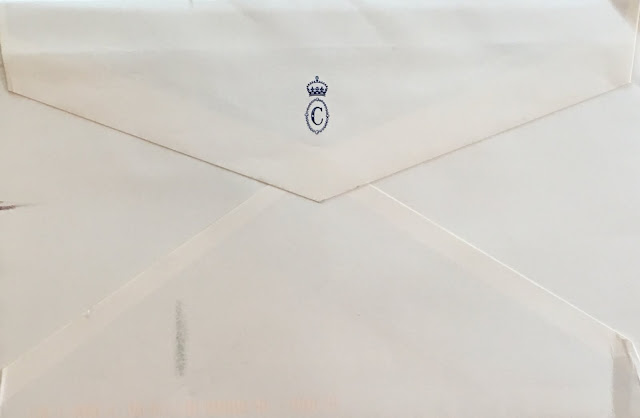 Inside is the usual sort of reply for Duchess Camilla's birthday, a large photo card with typed message on the back. This card is twice the size as the normal photo cards that Clarence House sends out for other royal birthdays.

The front features a photo of Duchess Camilla at the Hermitage Plantation House in Saint Kitts and Nevis during her Spring tour with Prince Charles in March. The photo was taken by royal photographer, Arthur Edward. 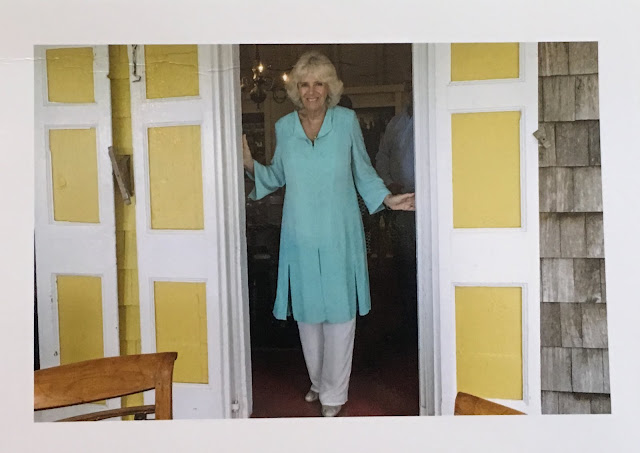 The back of the card features a typed message along with Camilla's auto-penned signature. 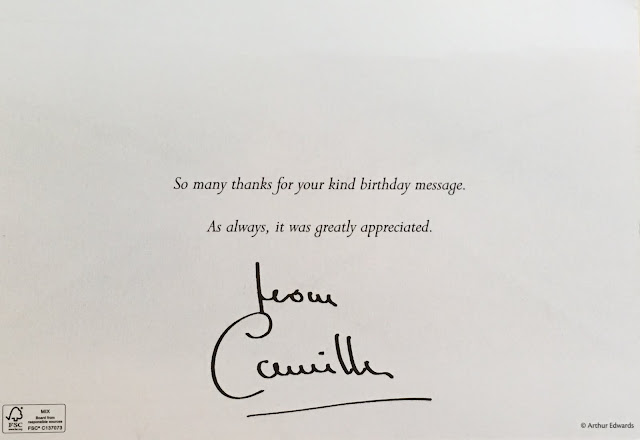 
So many thanks for your kind birthday message.

As always, it was greatly appreciated.

Each year, for events like her birthday, Camilla does hand-sign a selection of cards and rest are auto-penned. The last few years I've written I've been lucky enough to get a real signature. But you can't expect to get lucky every year. Either way, it is an absolute treasure.

There are a few ways you can tell something has actually been signed by Camilla:


Autopenend signatures:
Back to Replies - Main Page
Posted by Gert's Royals at 4:28 PM