This arrived while I was on holiday.

I had written to Prince Albert and Princess Charlene of Monaco to congratulate them on their 5th wedding anniversary, which is July 1st/2nd (Civil/Religious). I had written much earlier than I normally do because I had gotten June and July mixed up. Surprisingly this arrived well before their actual anniversary.

The front of the envelope looks like typical mail from Monaco.

The stamp is for the 150th Anniversary of the International Telecommunication Union. It was released in May 2015. The postmark is for Jardin Exotique de Monaco (Exotic Garden of Monaco).

Two interesting about this envelope: (1) No monogram on the back. (2) The envelope is not as nice quality as we normally see from Monaco. It is hard to tell from the picture, but you can definitely feel and see the difference in person. Monaco envelopes usually vary in color (white, cream, etc) and have different textures, but they are very nice quality. This envelope is a very basic envelope.

Many Royals use basic envelopes with little/no adornment, which is fine. It's just surprising for Monaco. Their Royal Family has a long history of being Stamp Collectors (Philatelist). There is a Royal Stamp Collection museum, and every stamp & postmark that Monaco uses has been approved by the Prince for generations. So, obviously, mail is an important thing for the Royal Family. They take great care & pride in it. (I have long considered them to send the nicest replies out of all the royals).

Another interesting thing about the reply is that it is a letter. Normally they send a pre-typed card for the occasion. (Which are always very lovely, on very nice quality cardstock.

Letter replies are usually sent, when they don't have a pre-made card (either because they didn't make one for that occasion, or you wrote too early or late).

The letter was written by Christine Sprile, one of Prince Albert's Secretary, and is fairly short, printed on nice paper. You will notice they took care to put the text between the two folds. 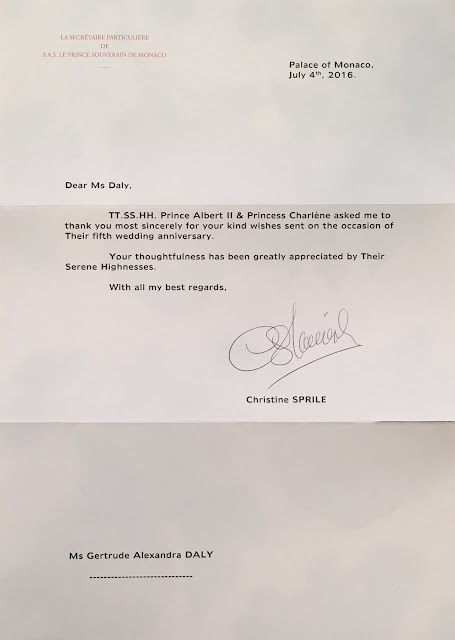 TT.SS.HH Prince Albert II & Princess Charlene asked me to thank you most sincerely for your kind wishes sent on the occasion of Their fifth wedding anniversary.

Your thoughtfulness has been greatly appreciated by Their Serene Highnesses.

What is interesting is the date on the letter, July 4th, which is next week. (Obviously not when the letter was written.) Sometimes replies are dated with the date of the event, but their wedding anniversary is on July 1st/2nd, not 4th. This letter was also written too late for it to be a June/July mistake, where they had meant to write June 4th.

The red print on the top of the page reads "La Secrétaire Particuliére De S.A.S. Le Prince Souverain De Monaco" which translated mean "The Private Secretary of His Serene Highness, the Sovereign Prince Of Monaco."

Back to Replies - Main Page
Posted by Gert's Royals at 2:46 PM

This arrived on Friday. I had written to the Cambridges for their 5th wedding anniversary and Princess Charlotte's 1st Birthday.

A month and a half later, this arrived. It is the Cambridges' usual picture reply. 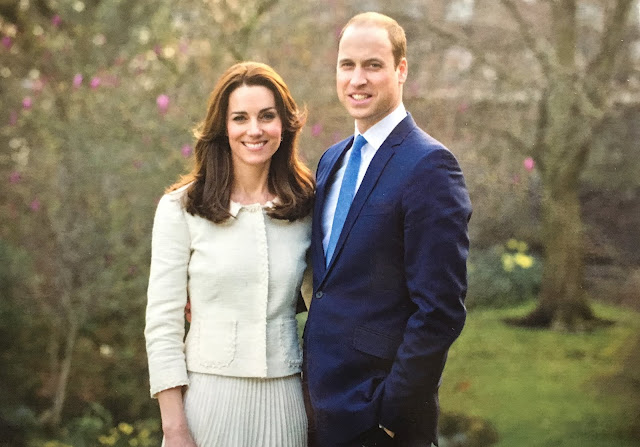 The picture certainly surprised me. This is the 1st time, I've gotten a photo that hadn't been released to the public. This is unusual, as we usually get a picture from an official engagement or some official photo that was released.

The photo was taken by Chris Jelf. He was the photographer behind the Cambridge's Christmas Photo taken last October.

The message is what we typically see. 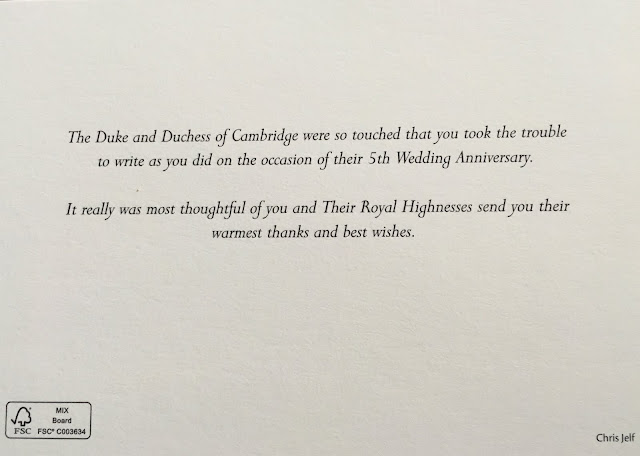 
The Duke and Duchess of Cambridge were so touched that you took the trouble to write as you did on the occasion of their 5th Wedding Anniversary.

It really was most thoughtful of you and Their Royal Highnesses send you their warmest thanks and best wishes.

My letter for the Cambridge's 5th wedding anniversary was also for Princess Charlotte's 1st Birthday. I had hoped to find two cards in the letter, one for each event. But no.

Back to Replies - Main Page
Posted by Gert's Royals at 5:13 PM