Today I received a reply from the UK. I had written to Duchess Kate for her birthday.

The envelope is the typical from the British Royals with the EIIR postmark from the Buckingham Palace Court Post Office.

The reply is the usual of the Cambridges, a photo reply with typed message on the back. The picture was taken by Arthur Edwards during the Cambridges' visit to Only Connect's Head Office in November 2013. 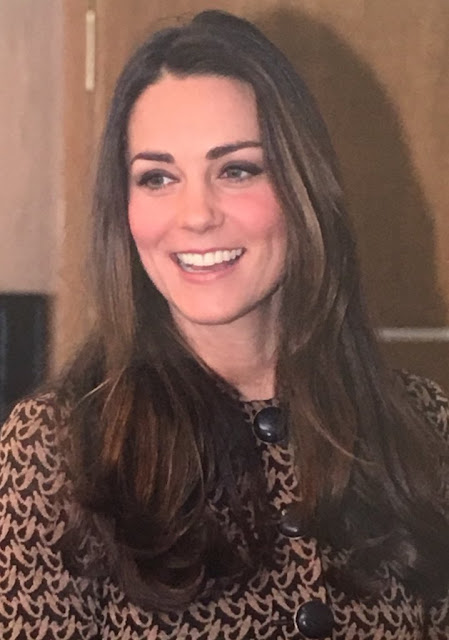 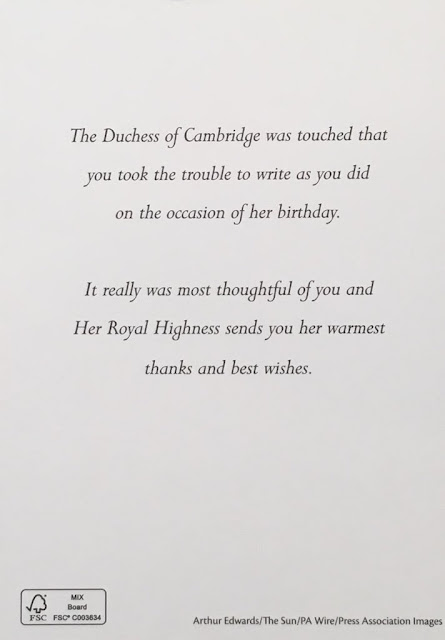 
The Duchess of Cambridge was touched that you took the trouble to write as you did on the occasion of her birthday. It really was most thoughtful of you and Her Royal Highness sends you her warmest thanks and best wishes.

I knew this letter was going to be different from the usual Monaco reply when I noticed the back of the envelope was missing Prince Albert of Monaco's usual monogram (2 red A's under a crown).

This reply was for my letter to Prince Albert to congratulate him on his 10th anniversary of accession. The response was written on July 22nd and mailed on the 24th. It took 12 days in the mail, which is a little longer than usual.

Besides the lack of monogram on the back, the envelope looks exactly like usual. And yes, that is Prince Albert on the stamp.

This time, the reply was a letter written by Prince Albert's Private Secretary, Christine Sprile and hand signed. I assume this is because there was no prepared card.

The note is brief but mentions why I wrote and thanks me for writing. The red print on the top of the page reads "La Secrétaire Particuliére De S.A.S. Le Prince Souverain de Monaco" which translated mean "The Private Secretary of His Serene Highness, the Sovereign Prince of Monaco." 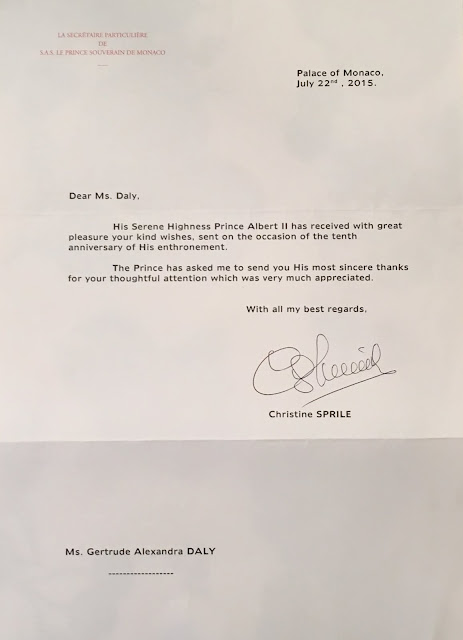 His Serene Highness Prince Albert II has received with great pleasure your kind wishes, sent on the occasion of the tenth anniversary of enthronement.

The Prince has asked me to send you His most sincere thanks for your thoughtful attention which was very much appreciated.

This letter is very sweet with a lot of nice adjectives: great pleasure, kind wishes, sincere thanks, thoughtful attention, much appreciated, best regards.

Another interesting thing is the salutation "With all my best regards,". For the most part, I've always seen "Yours sincerely." "With my best regards" seems more personal than the typical response, especially since the writer is normally writing on behalf of a royal and sending the royals thanks and best wishes, not their own. 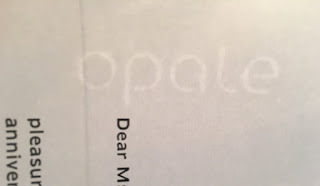 And the last thing I have to say about this letter, is check out the awesome watermark, "opale". Only a handful of letters I've gotten have had watermarks. Opale is a brand of paper created by the UK company, Arjowiggins. Arjowiggins also make the brand Conqueror commonly used for Monaco's typical pre-typed responses.