A lovely reply arrived from the UK this week. I wrote to Prince Philip at the beginning of the month for his 96th Birthday. This lovely reply came on Thursday, so it was very quick.

Equerries are officers in the Armed Forces who serve in a Royal's household. Equerries often help coordinate engagements, travel, etc.  The position of Equerry for a Royal will often rotate through the different branches of the Armed Forces.

The reply is very similar to Prince Philip's previous birthday replies, but the message has slightly different wording each year. 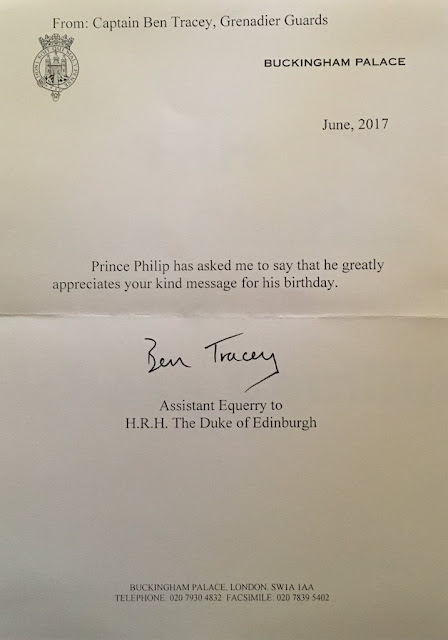 The letter says:
Buckingham Palace
June, 2017
Prince Philip has asked me to say that he greatly appreciated your kind message for his birthday.
Ben Tracey
Assistant Equerry to H.R.H The Duke of Edinburgh.
Back to Replies - Main Page
Posted by Gert's Royals at 7:36 PM