This reply arrived a few months ago from the UK. I had written to the York Family to extend my deepest condolences for the death of Prince Philip.

The front of the envelope is the usual from the British Royals. From the postmark, we can tell this envelope was processed through the Court Post Office at Buckingham Palace. Despite stepping down as a working royal in November 2019, it appears Prince Andrew still keeps an office at Buckingham Palace. And the Sovereign Grant is still coving the cost of postage, as the envelope uses the Grant’s PPI number W4047. 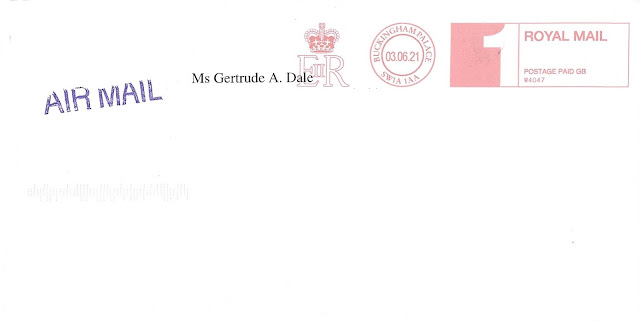 The back of the envelope is the same Prince Andrew has been using for years, featuring his badge in blue. Andrew's badge is the York Rose, surrounded by the Order of Garter belt and topped with the coronet of the son of the sovereign. 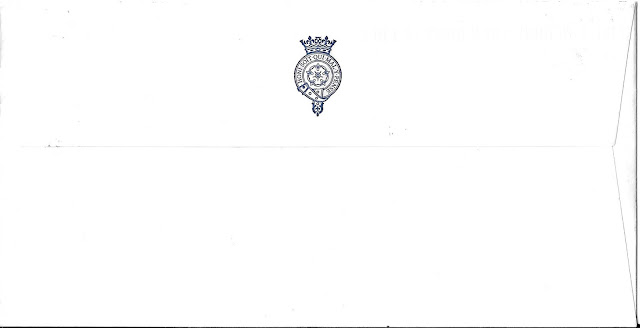 Inside is a letter from Libby Horsley, an "Assistant Private Secretary" in Prince Andrew's office. Libby previously worked for Pitch@Palace, but started working for Andrew's office after Pitch@Palace temporarily shut down "to reassess its future direction."
The stationary is the same as we have always seen from Prince Andrew. Although I had addressed my letter to the York Family, the letter is just on behalf of Andrew. This is likely because it's just a form letter, that was sent out to everyone who sent a letter to Andrew's office to express their condolences. 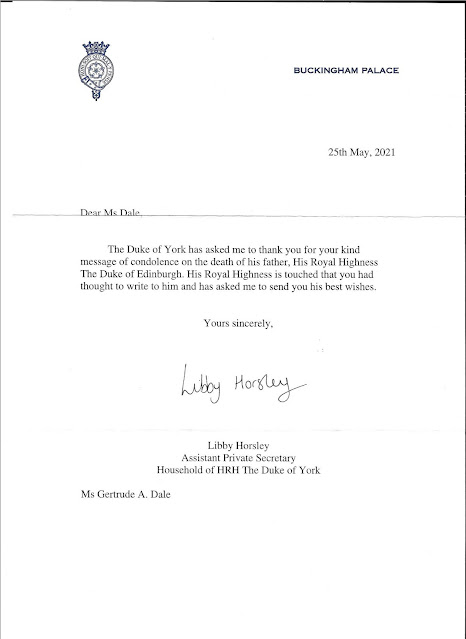 The Duke of York had asked me to thank you for your kind message of condolence on the death of his father, His Royal Highness The Duke of Edinburgh. His Royal highness is touched that you had thought to write to him and has asked me to send you his best wishes.

Assistant Private Secretary
Household of HRH The Duke of York

They did misspell my last name on both the letter and envelope.
Back to Replies - Main Page
Posted by Gert's Royals at 4:05 PM