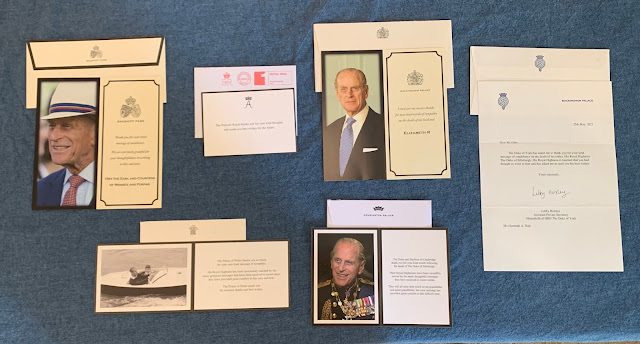 Following Prince Philip's death in April, I wrote to a number of members of the British Royal Family to express my condolences. I received replies back from everyone, except for the Sussexes. You can find a detailed blog post about each reply via the link below.

4 of the replies feature a photo of Prince Philip. Prince Charles's reply used the oldest photo, from 1958. And the other photos were from 2011 (The Queen), 2012 (Cambridges) & unable to identify date (Wessex).

5 Replies used black edging. Prince Andrew's was the only one not to.

The replies and envelopes featured

Prince Philp is referred to as:
3 cards mention the royal's relationship to Prince Philip
Posted by Gert's Royals at 7:13 PM